A Nightmare in the Stone Forest

Originally published in The Evergreen Review Issue 123 in June, 2010. 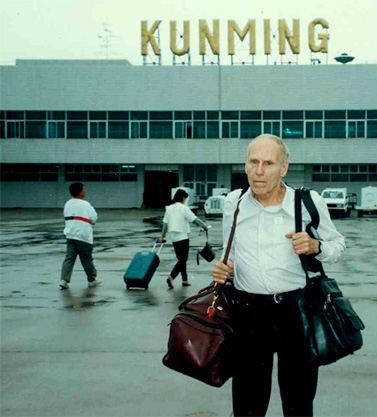 Itis November 5, 1996. I am sitting next to my companion of many years, Astrid Myers, on Thai Airlines Flight 103, the 1,200-mile daily jitney from Bangkok to Kunming. How much more comforting it would be to be back in a Bangkok bar, enjoying its opiate of female beauty, than approaching Kunming with its too-many memories? This is the fifty-first anniversary of my war. Kunming was my battleground.
As the plane sets down, my first glimpse of Kunming reminds me that I never loved it. I remember a large sign at the hot springs of the Health Spa Hotel:

BOYS WILL NOT
BATHE WITH GIRLS.

Now we disembark, and I linger on the runway, looking for the “rusted hulks of WWII planes,” which my guidebook advertised. I photograph a number of planes—but not the old ones. How empty and glum this airfield looks now. They should package this trip for old warriors and call it the Hemlock Tour. 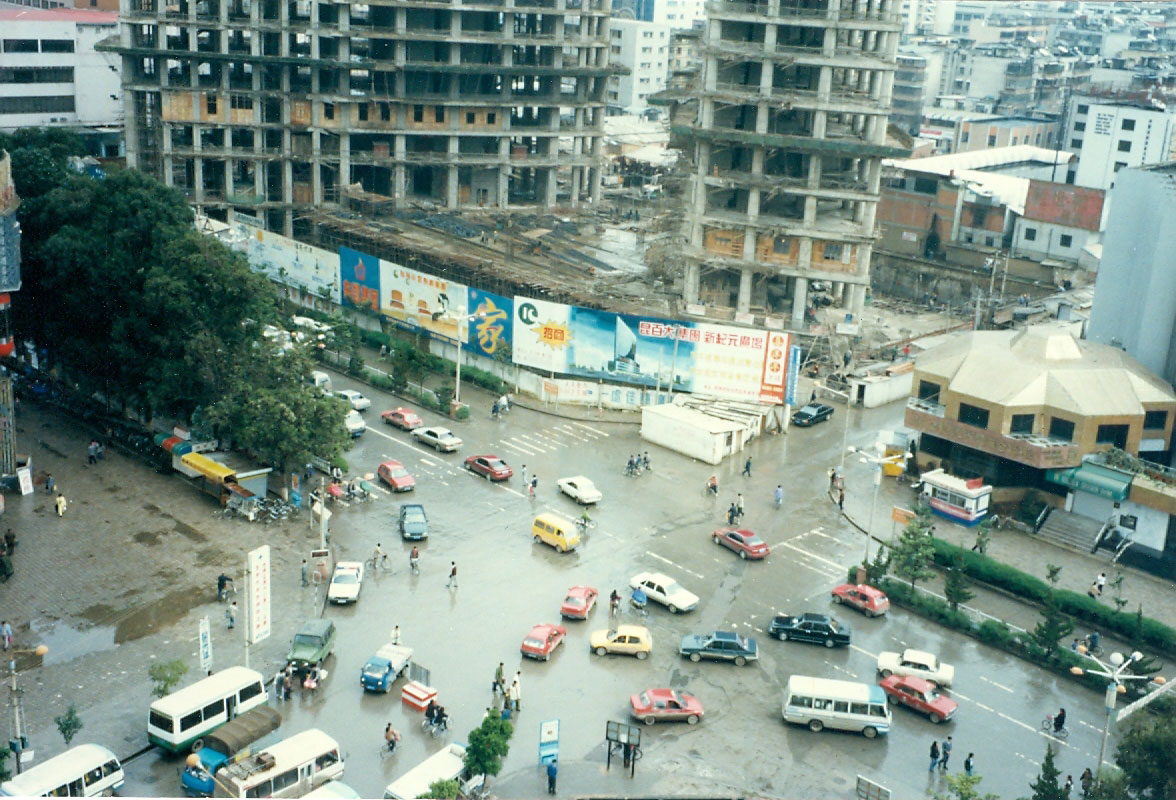 After going through cheerless lines at customs, without any help or direction, we take an unmarked taxi whose sullen woman driver acknowledges only the name of the hotel, King World, to which we have told her to take us.

The boulevard along the way is drab, the landscape somewhat between a construction project and a slum. There is traffic, but what a contrast to the bustle and life of Bangkok.

The only touch of sensuality is a pair of chic, good-looking young women in our hotel elevator when we get in. The elevator stalls, then reopens, and framed in the doorway is a stunning Chinese-gowned woman stationed in front of the elevator bank. She speaks a few harsh words and a policeman appears and pulls the frightened women next to us out. We then go up to our floor, where an attendant stands at the elevator, hands folded primly in front of her face, an obsequious house-cop making sure that we go straight to our room. 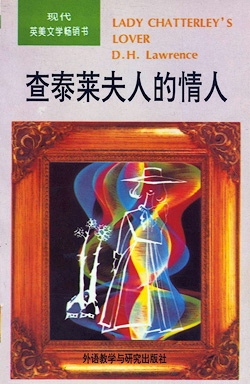 Our request made to the hotel desk for a newspaper other than the free handout in the lobby was answered with a curt “Go to the foreign bookstore.” We were directed to a neighborhood where a scrim of old Kunming clung to the riverfront, its bricks, quays, shingles, and foliage completely hemmed in by steel towers. There were no newspapers in the bookstore to which we had been directed, but there was a paperbound copy of Lawrence’s Lady Chatterley’s Lover.

Now, carrying my new “Chinese” Lady Chatterley, I walked slowly back to my hotel room. What was it they were saying about it in these copious notes? Was someone in one of these towers of glass straining over Lady Chatterley, using the Chinese annotations to pierce such obscurities as “Pentecost,” “madonna-worship,” “phallus,” “Cannes,” and “hopeless anachronism”? 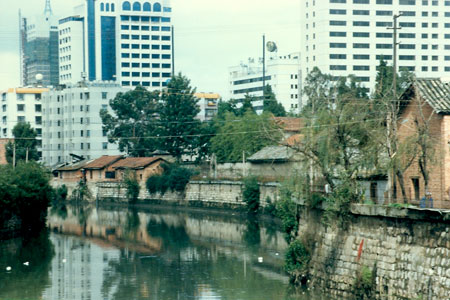 I didn’t expect to be welcomed by rifle salutes, but no one we met seemed remotely aware of Kunming’s past. Amazingly, the travel agents here have no maps. “And Kweiyang?” I ask. I remember Kweiyang as being 500 km or so to the east, eighteen hours away by jeep—but the town appears to have fallen down a deep ravine. A place which I considered my war-home has apparently been excised from foreigner’s itineraries, and local memory, even though it is the birthplace of the current President, Jiang Zemin. The party-line newspaper, China Daily, reports that President Zemin just visited Kweiyang. “He said he was distressed to see that some farmers still live in thatched huts, with meager supplies of food and clothing. He had handed out quilts to the farmers and urged local officials to visit impoverished villages frequently and take care of the practical needs of the masses.” He reached Kweiyang, the article says, “along wriggling mountain roads,” just as I had fifty years ago. So much for my dreams of social progress under the leadership of Mao and Chou En-lai. They had absorbed a nightmarish tinge. 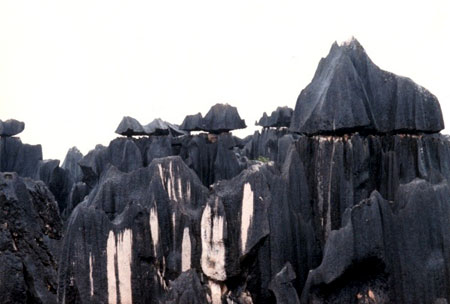 The following morning Astrid made an excursion without me to the “Stone Forest” of limestone peaks outside of Kunming, of which my guidebook says, “As twilight comes in, the forest of limestone pillars seems grey and forbidding. The paths become a maze and you suddenly wonder if you can find your way out.” Charming. My war years made me regard such formations as presenting risks of ambush. Anyway, Kunming is a petrified forest in itself, and every hour I spend in this ascending pile of steel and glass grows more suffocating and distasteful. When Astrid returns we walk in the city and see a rare sign of independent life, a gang of young men who are loitering on the sidewalk, hawking some large knives which I suspect are both their merchandise and their arsenal. Thugs or no thugs, I like them. When they see our camera, they run up and hug us. 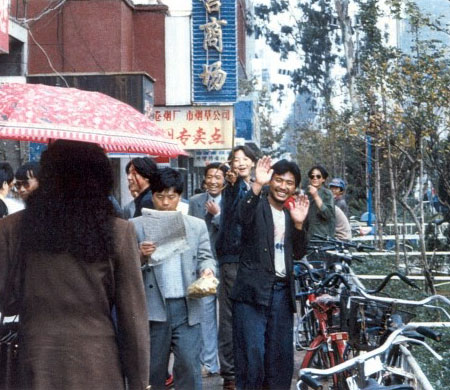 Young men with knives to sell.

Walking back to our hotel, the four-star King World, along Beijing Boulevard about midday, we stop for a red light at a busy intersection. A serious, intelligent looking man, neatly attired in a student/professional way, and holding a child (about three years of age) in his arms, cautiously approaches us. “Would you like something to read?” he says, in a very quiet voice. Then he says, “I have been arrested.” He puts the child down, opens a small black leather briefcase and hands me a Xerox of a handwritten document. I take it, and unasked, hand him a 100 Yuan note (about twelve dollars). He accepts it, whereupon I say, “Thank you. Good luck.” The Chinese man, a bit surprised, also says thank you, then gently picks up the child and moves silently away as we continue across the street. The whole incident seems to last no more than a minute. 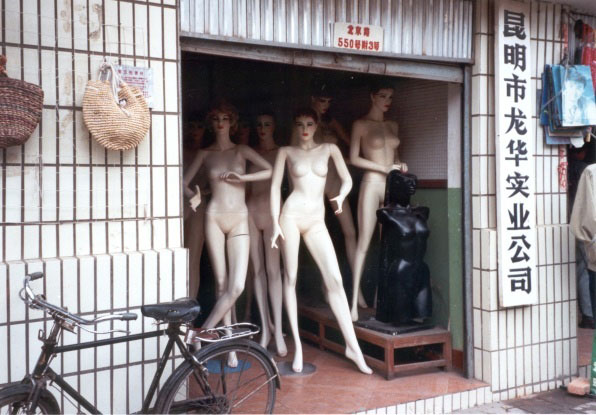 The document proves to be a complaint against brutal political corruption, where the victim who reports a crime to the local police is caught in a Kafkaesque maze.

I think that Boeing, G.E. and the Chinese Communist Party are building an unholy alliance here. Sentences leap out at us—quotes from a student leader, Li Peng. “Today's government is crueler than the Guo Ming Dang’s [Kuomintang] government, seventy years ago . . . that government only used high pressure water to disperse students. But in Tian An Men [Tiananmen Square], the police used machine guns.” 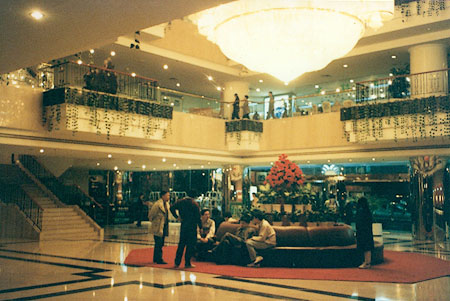 Now back at the King World Hotel, I feel even more disgust for the huge, expensive, and deserted lounge area, its joyless luxury designed for business junkets. My fear mounts as I stare from the hotel window, which overlooks the corner where we had received the document. The busy thoroughfare holds a lone, slow truck. Two dim street lamps fend off a sea of darkness. Even under the Japanese bomb threats of fifty years ago, we had not extinguished the city to this point, having enough cheer and bravado to light street fires, and keep the wine flowing.

As I fell asleep in my room at the King World, I felt an unmistakable panic, which progressed into a dream.

Two hundred fifty-four people had died in a disaster in East Hampton. Now I am being told a brash populist is opportunistically restaging the disaster, for profit, right now at Madison Square Garden, which has been transported to the center of Kunming. Crowds are lined up in a dark lot outside the hotel, waiting to get in, but fires have broken out. People are burning to death. I chase the hired cameraman, trying to help him. He bursts into flames! Can I help him or is he already dead? I am paralyzed. I must try.

The nightmare peaks. The fear has become intolerable. I am half-awake, shame and horror following close upon the dream. I am tortured by my dereliction, my indecision in going to the aid of the cameraman. I hoped his swift destruction would relieve me of responsibility. But he has survived the first bonfire. The dream resumes.

I run toward him across the Kunming slum, this Lower East Side vacant lot, this Kunming/Manhattan plot of accursed real estate. There are murderous drug dealers and their outdoor fires, and there is the hapless cameraman. A structure is collapsing on him. Now he must be suffocating, dying. But is he? I have to check, move toward him, free him from the collapsing timbers and debris. But will I escape this killer mob?

My fear is all-enveloping. I wake up.

I look out the window at the desolation called Kunming, desperate to leave. Another day here and I would be out looking for that hapless guy who gave me the manuscript. Soon we would both be in trouble, real trouble.

When our plane takes off from Kunming Airport the following day for the return to Bangkok, there are no Zeros stalking us. I am heading back to Nighttown. Perhaps I will see the shades of Valerie and Ferral at the weekend market, laughing as they buy a new birdcage and a fighting cock to put into it. And, of course, I will have a drink with Tony at the bar of the Shangri La and another at the Oriental. Perhaps at the Asia Bookstore on Silom Road, I will bump into aristocratic and handsome Chou En-lai. I have bad news for him.