Bruce Benderson Will Have His Revenge On America: A Review of Pacific Agony 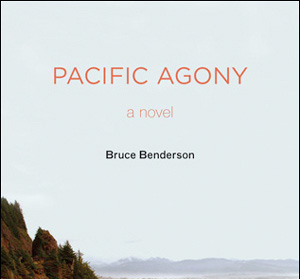 Bruce Benderson’s Pacific Agony is a welcome literary evisceration of the effects twenty years of “bourgeois gentrification” have exerted on the American landscape.  Following the brutal mental and emotional collapse of Reginald Fortiphton, a New York writer invited by a “small, fledgling publishing cooperative... West to research a book on their region,” Benderson takes us through a perfectly constructed parable of contemporary America. Maintaining metaphorical themes (the Sun versus the rain), comfortably and adroitly building the textual timbre with cultural allusions that extend from Nirvana to Aristophanes, Benderson shows himself to be a modern master of the English language, an artist who uses the full potential of words without compromising the voice of his characters and with the same integrity and power of the paint on a Mark Rothko.

Benderson’s antagonist, Narcissa W. Applegate, introduced alongside Fortiphton on the frontispiece of the trip’s resulting manuscript—Impressions of the Pacific Northwest—exists, for the most part, in the confines of ninety-five footnotes that she makes to Fortiphton’s text in an attempt to salvage the travelogue of bridges, cities, and attractions, which she expected but never received. A well-to-do member of the ruling class, her a posterioricontribution to the text immediately seems censoring, making Applegate a perfect candidate for villainous caricature. Instead, Benderson creates a compassionate and believable character, lending equal weight to the point of view expressed in her shadow narrative.

The motivation for Fortiphton’s acceptance of the assignment eventually becomes clear. Fortiphton is seeking to discover “a hidden face of the land, something dark, irreverent, protesting… a kind of anti-community that I had a chance of becoming a part of....” (Pacific Agony, 127). He is the embodiment of the outsider artist, banished from social acceptance by the strict guidelines of normalcy and unable to withstand the dulling parameters required for comprehension in the brittle world of yuppie hegemony. Reginald Fortiphton has come to the Pacific Northwest looking to find The Island of Misfit Toys.

The journey in Pacific Agony crescendos to a transformation in consciousness that is contemporarily analogous to the salvation of the wayward soul, at La Push, Washington. Fortiphton at La Push becomes the modern expression of Raskolnikov at Siberia.

So I didn’t return to my cabin. I made my way farther along the shore and fixed my eyes on a single, cawing bird; it was just an angry speck, as inconsequential as me, dwarfed by the slimy giant log upon which it perched. But as I gazed into the sea, I saw that even larger logs were nothing in the hands of the heaving waves that batted them about like ping pong balls.

I stooped toward the waves and cupped a part of them in my hand, whereupon the substance of the waves , too, became clear nothing, and the waves lost their powder and even their form.

Matter itself, the building block of nature, had instantaneously become insubstantial. Nature herself was nothing and ultimately formless, shimmering. All that really existed was this force, which at that moment I identified as the wind, howling in the shell of my ear like an eternal, unmodulated drone…” (Pacific Agony, 179)

The destruction of Fortiphton’s ego is a direct attack on the building block ofthe yuppie-cultural matrix. By revealing that, in spite of this “vast gentrification project” that has become known as America, it still is possible to return to those “subterranean springs,” spoken of by Anais Nin eighty years ago, Pacific Agony spearheads into the very heart of America’s current heart of unbearable darkness. Benderson’s demonstration of the victory of ultimate possibility, in a land ordered by impossibility, is a masterstroke.

Like the protagonist of Nirvana’s “Frances Farmer Will Have Her Revenge on Seattle,” to which Benderson alludes in one of many flawlessly executed referential moments—“Most confusing, however, was an unrelated tattoo under the narrative drawings, on the back of her hand, which was composed simply of the words “Frances Farmer’” (Pacific Agony, 120)—Bruce Benderson too will have his revenge, but his revenge will be much greater, pouring down upon the land as mercilessly as the Lear-like downpour that meets Reginald Fortiphton at the end of his journey; washing away all the Wall-Mart numbing ‘I can’t’ unconsciousness of the contemporary American landscape, washing away to reveal the land in all its ‘I can’ splendor. Yes—Bruce Benderson will have his revenge on America.