Photography courtesy of the author 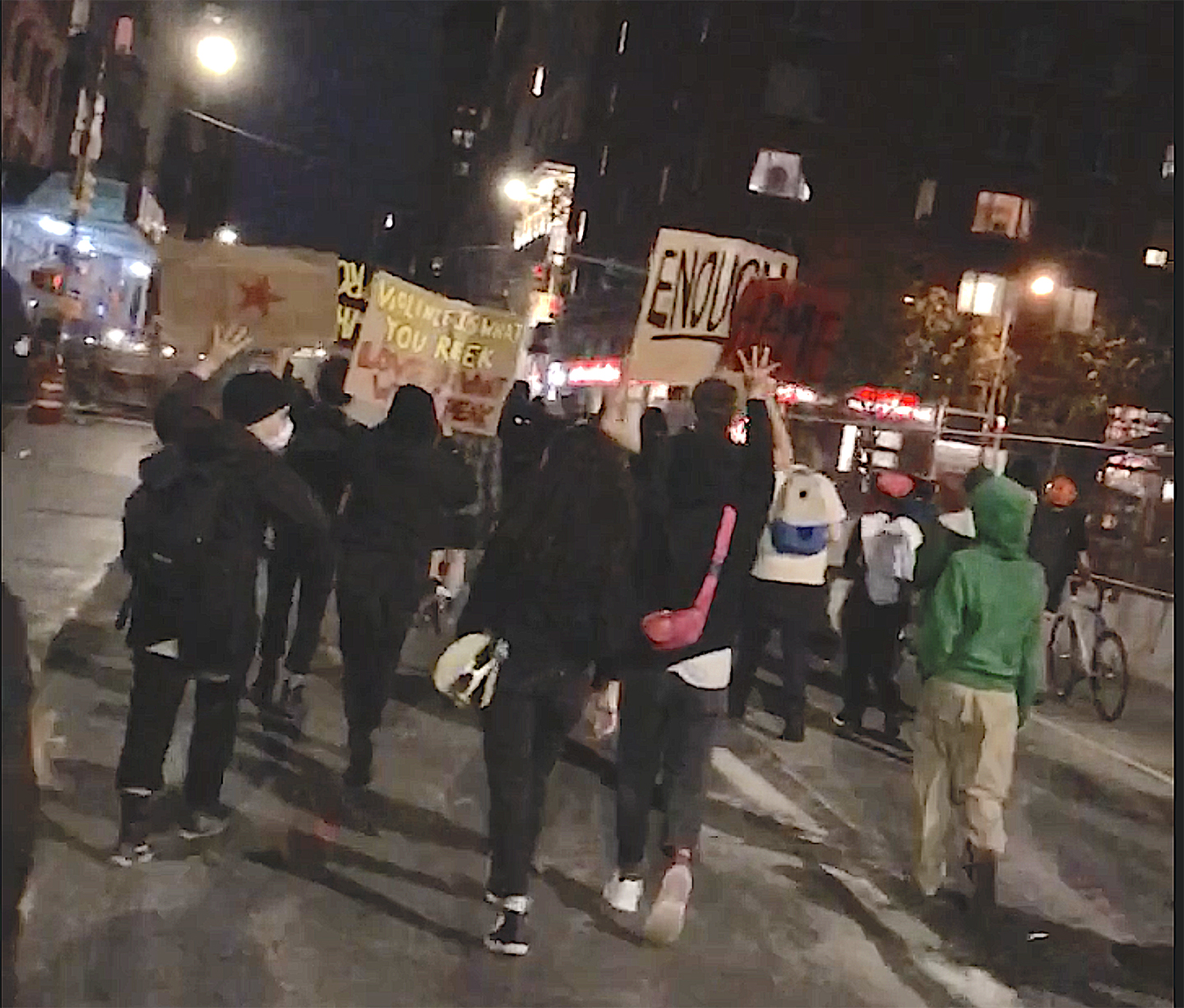 Here's what didn't happen last night: after the president held up a Bible and suggested mobilizing the United States military against the United States people, and the mayor of New York imposed a curfew of 11 PM, tanks didn't roll up Broadway, not yet, and lines of city officials with white in their hair didn't link arms to protect the young people fighting for Black life, which is all life, not yet—but at the edges of what did happen, you could feel what might, just ahead, just as you can always feel what's happened already, like the Lenape councils someone invoked in front of the Stonewall late in the gold afternoon, just before everyone knelt on the street, or the scaffolds at the end of Wall and the execution grounds where the halls of justice are now, where the land-thieves with my ancestors among them demonstrated what's to be done with rebellion.

Here's what did roll up Broadway last night: the people I don't usually see at demonstrations, who didn't pick up duplicate signs from a pile and walk along the permitted route, framed by the police barricades that always remind me of the walls of a mouse maze in someone's experiment. Before these past days, I'd forgotten the joy of moving through the city yelling for the end of state murder (this is what all demonstrations are about really, no?) without the permission of the murderers, the edges of the group fluid and alive, so people can come in and out, the people at the front deciding where next, depending on what's unfolding right now. There was none of that attitude of petition that's mysteriously persisted in “resistance” movements, even since the election of 2016, none of that insistence on speaking to some delusion of a manager—these were people who knew there's no manager, who weren't petitioning anybody, who know that this city belongs to the people who live in it, all of us, and that state murder as an everyday practice within it isn't going to end through petition. We outside, I heard more than once, from people laughing, their faces lit with a joy I haven't seen in person before. We outside.

I was by myself and biking at the edges and could hear people talking about politics and power with that lit energy of something getting born. They were angry in that way unmaimed people can be, young as they were and are, angry on behalf of life instead of death—they were playing music and laughing and saying the name of the man we all watched the police murder, as if they knew him, so of course they had to be out like this, curfew or no, how could you not get in the street if they come for somebody who's yours, somebody you love. Someone was playing NWA's “Fuck tha Police,” someone not born yet when I heard it blasting out of cars in Teaneck, New Jersey, when another cop killed Phillip Pannell thirty Aprils ago—thirty years of Confederacy not undone, and even the first Confederacy another grinding reiteration of those first colonial deathways so many of us still can't see. They were every color there is, and that New York streetlight off black pavement on a spring night wrapped all their shoulders together as they'd come up to a new intersection, where other New Yorkers would honk their horns and lean out of cars to cheer them. 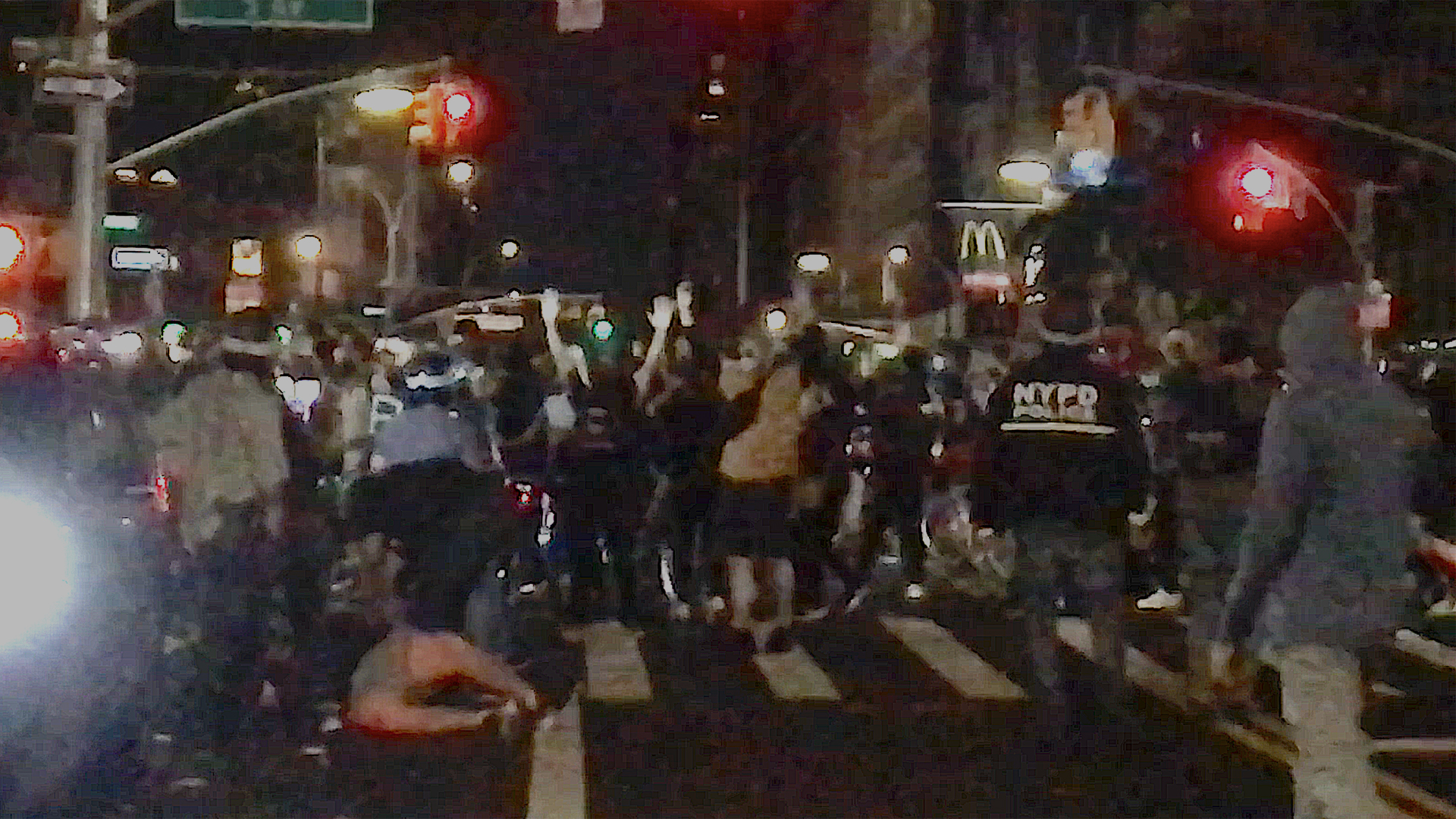 “Someone was playing NWA’s “Fuck tha Police,” someone not born yet when I heard it blasting out of cars in Teaneck, New Jersey, when another cop killed Phillip Pannell thirty Aprils ago—thirty years of Confederacy not undone, and even the first Confederacy another grinding reiteration of those first colonial deathways so many of us still can’t see. They were every color there is, and that New York streetlight off black pavement on a spring night wrapped all their shoulders together as they’d come up to a new intersection, where other New Yorkers would honk their horns and lean out of cars to cheer them.”

So many people have lost their jobs now, but the carpenters and glaziers had lots of work on Broadway after Sunday night, replacing broken glass and putting up boards on the stores where you can buy a shirt for the cost of a week's living wage—you could still see the broken glass glint in the street as the demonstration made its way north, and with the rise at Canal you could see hundreds more demonstrators up ahead, and feel the joy when the different groups would join each other, their voices drowning out the sound of the police helicopters watching them. By this time it was half past ten, half an hour until curfew, and the lines of half a dozen unmarked police cars with sirens dashing around the intersections would wait at the lights for the marchers to pass, then tear through.

Here's what didn't happen then: these people who couldn't stay home when the state murdered somebody didn't spend the night in the city that's theirs, trying to holler loud enough so everyone else would agree that regular life will not proceed at least until the other cops who knelt on George Floyd's body are arrested—at most, not until this long colonial death-chapter is ended. As we came up to 23rd Street it was almost eleven, and the group was much larger; Orderly or disorderly? I'd heard the police radio dispatcher asking when I listened Sunday night, which seemed to mean Breaking things or no? (Breaking the sleep of people who think electing a man who recommends shooting in the leg vs. the heart will save us didn't seem included in this.) So by this standard the group was boisterous and orderly, and the police cars speeded up and cops in riot helmets jumped out and formed themselves into a line, close, so they could grab someone and throw him face down on the ground and lash his wrists behind his back, this is the law, and so the demonstrators could throw a couple of plastic water bottles at them, and yell to each other Don't be scared, Don't be scared. 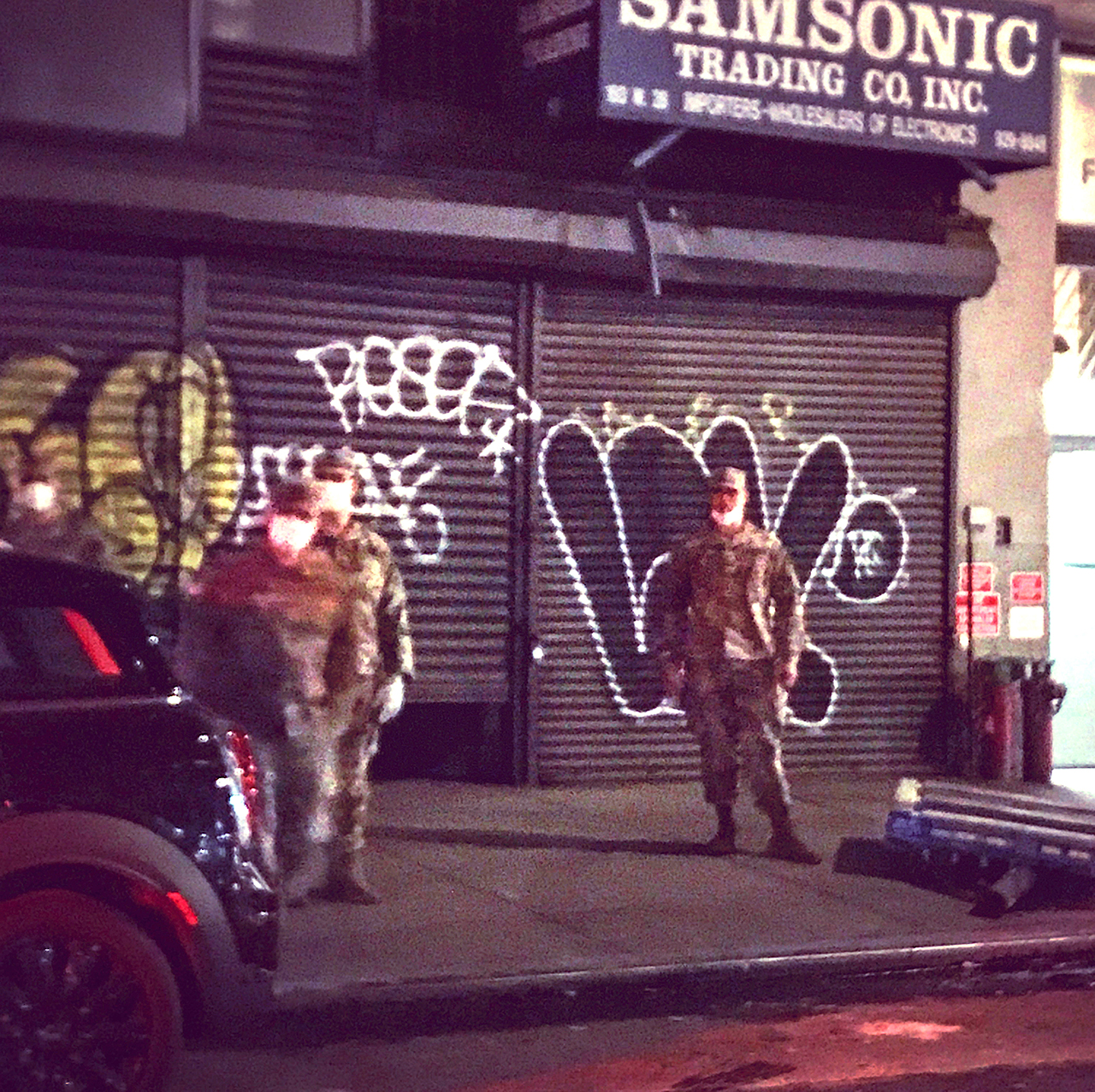 In that New York way, another block is another reality—so I'd dip a block west and nothing was happening, or another block west and four kids were breaking a store window, sometimes as a cop car was driving by. When you're sitting at home, the cops seem obsessed with the looting; at night, on the street, they don't seem to care about it much at all. What they care about is that word the president used so often while speaking with the governors, the colonial cornerstone: domination.

I've been in a curfew once before, in Bethlehem, on New Year's Eve in 2002; some generous gracious professors gave a party for us visitors at a local restaurant, interrupted by yelling through mounted loudspeakers and tear gas and Israeli soldiers pointing their rifles at us from little tanks we helped pay for. The scared taxi drivers had to try to get us back to our hotel running the gauntlet of the alleys of tear gas and soldiers shooting up into apartment buildings. The first night of curfew in Manhattan wasn't like that—there was no announcement, 11 o'clock came and went, little groups of demonstrators peeled off onto the sidestreets to holler elsewhere or to go home. But this did happen: on 28th Street, just east of Seventh Avenue, someone in fine New York tradition was blocking traffic as they tried to parallel park, and someone else had gotten out of the big black SUV to direct the driver when to cut the wheel—except they were soldiers, US Army, in uniform, three on the sidewalk, in masks and gloves, one directing, one behind the wheel.

Someone later told me there's a Guard post near there. Two skinny boys laughed nervously when they saw them—I doubt they were sixteen yet. They send you for the riots? one boy asked the director, and he said no. But you goin, right? the boy said. 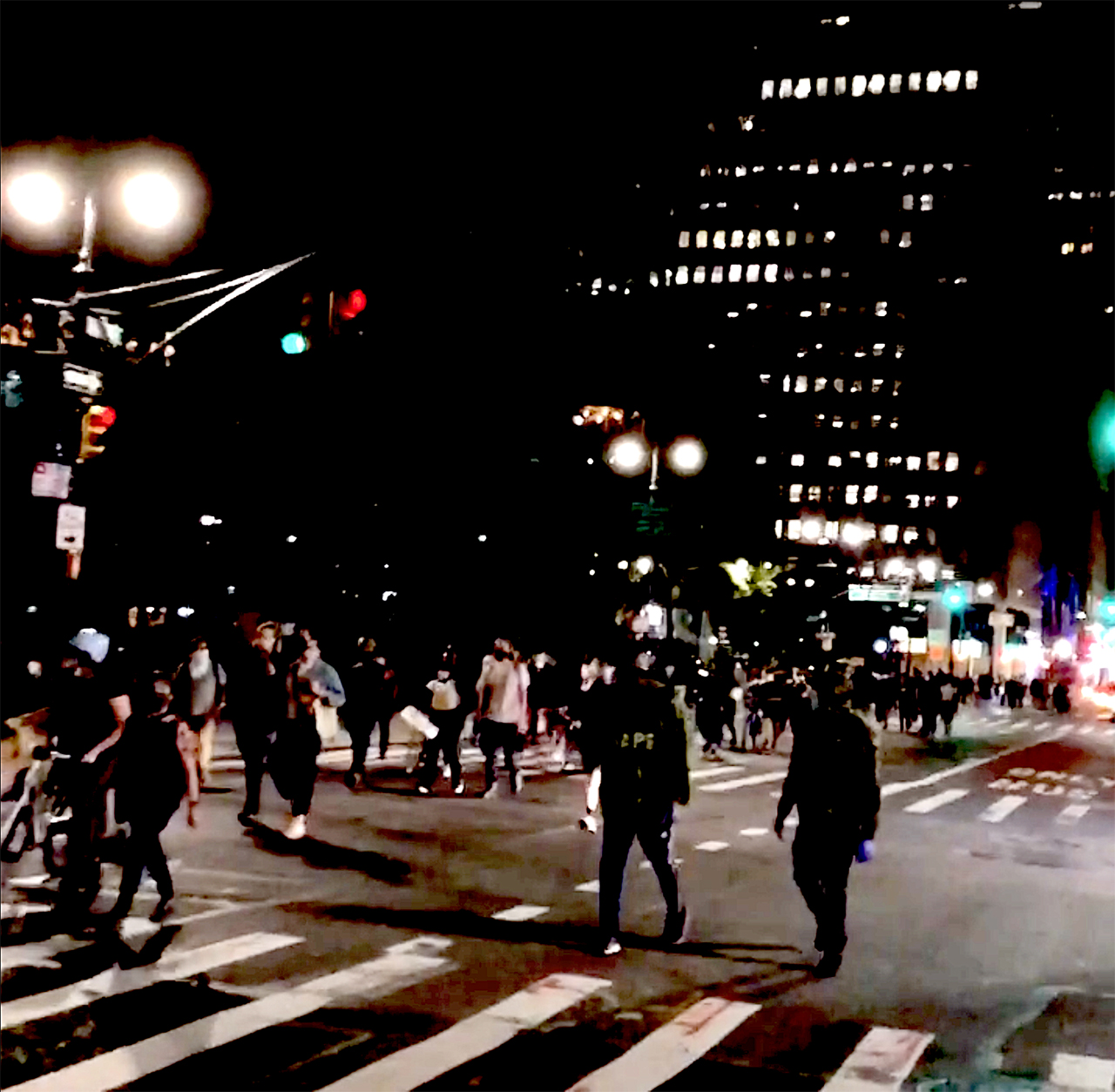 Tonight the curfew's set for 8 PM instead of 11. One of the many things I learned in Bethlehem: a curfew isn't to keep people safe. It's a way to hide the results of impunity, and a strategy of domination. Last night I kept wishing for lines of New Yorkers with white in their hair to stand between the lines of police and the demonstrators—I wanted to hear in New York accents, "A curfew? Here? You're kidding me, right?" Today on Twitter you can see the unbought undominated city officials I'm so grateful for, Jumaane Williams and Corey Johnson and Brad Lander, hesitating at the edge of the decisions we all have to make when the law becomes illegal, or is it the other way around. They don't send out a notice telling you that. You have to figure it out for yourself. Ideally you figure it out before the space in which to do that closes.

"Okay so we'll go. We'll cheer from a distance."
"I'm scared."
"Me too."
"It's so beautiful. But holy shit. Broadway and Houston? Like, the destruction."
"But I mean, it feels like it's the entire city."

May it be the entire city, taking care of each other, ASAP. May domination as a way of living together be coming to an end.