In 1959, in the basement of a tenement on the Lower East Side, Richard and Dorothea Tyler founded an avant-garde artists’ collective and funeral society—yes, you read that right—called the Uranian Phalanstery and First New York Gnostic Lyceum Temple. You read that right, too.

The Tylers were influential but underground figures in postwar New York City culture. They connected people and created webs of creativity and spirituality that blended music, visual arts, printing and publishing, tattooing, Eastern religion, Gnosticism, Judaism, and communalism. And more. And all at once.

“Tyler’s home was filled with toy guns and ray guns and plastic hamburgers, and he sold them from his pushcart.”

R. O. Tyler, as he was known, was big, bearded, heavily tattooed decades before it was hip, a jolly drinker and pot smoker who could talk your ears off. He was widely read and erudite, conversant in unusual and esoteric paths of human endeavor. For example, “phalanstery.” A very obscure word that goes back to the early 1800s and the nearly-as-obscure Fourierist movement. Charles Fourier was a French philosopher who advocated communal societies. There were a number of Fourierist communes in America, promoted by Horace Greeley and others. The township of Greeley in Pennsylvania began as a Fourierist colony he supported called Sylvania. Phalanstery, combining “phalanx” and “monastery” was a term the Tylers used to define themselves.

Fourierism was mostly played out by the middle of the 1800s. That Tyler knew and revived the term in the twentieth century says something about his knowledge of arcane history. That he wedded it to “Uranian,” an astrological reference to Uranus’s powerful influence on creativity and innovation, and to Gnosticism, and the Greek Lyceum, and a Jewish temple, suggests a wildly eclectic and synthesizing imagination. Which seems to have been a hallmark of Lower East Side artists and intellectuals after World War II.

He was born Richard Oviet Tyler in Lansing, Michigan, in 1924. His mother was a member of the I AM movement, a successor to Theosophy and precursor of the New Age era, founded in Chicago in the 1930s. His father was a working-class Great War veteran. Tyler fought in the Pacific in World War II, and was among the American troops occupying Japan afterward. He developed a deep interest in Japanese tattoo traditions and Asian mysticism. Returning to the US, he used the GI Bill to study at the Chicago Institute of Art, where he met not only Dorothea but also Claes Oldenburg.

In the late 1950s he and Dorothea moved to a basement on East Fourth Street between Avenues C and D. When Oldenburg showed up the Tylers got him his apartment. They not only continued their friendship, but it’s likely that Richard influenced Oldenburg’s famous sculptures in ways not recognized in standard art histories. Tyler’s home was filled with toy guns and ray guns and plastic hamburgers, and he sold them from his pushcart (see below). Oldenburg’s Store, which he opened on East Second Street in 1961, sold ray guns; then he converted the storefront into Ray Gun Theater. His soft hamburgers and cheeseburgers may well have been inspired by his friend’s plastic ones. Dorothea helped stitch them.

Tyler found work doing magazine illustrations for Playboy and elsewhere, and taught at the School for Visual Arts and CUNY. He also helped develop Judson Gallery at Judson Memorial Church over in Greenwich Village, a center of avant-garde art and performance in the ’50s and ’60s. Oldenburg was there too, and Phyllis Yampolsky, and Jim Dine. Tyler played Death in Peter Schumann’s 1962 Totentanz at Judson, Schumann’s first performance in America. Schumann would later found Bread & Puppet Theater.

Tyler was the super of his building and the one next door, a yeshiva. He may have been the Shabbos goy for the old rabbi there. At any rate, when the rabbi died he left the building to Richard and Dorothea, with the understanding that they would maintain its tradition as some sort of religious or spiritual place. Which they did, in their own way, by making it the headquarters of the Uranian Phalanstery and First New York Gnostic Lyceum Temple.

Tyler named himself Dr. Uranian and Reverend Relytor; Dorothea became Madame Reab. All members of the group got these backward “secret” names. Tyler’s other wacky aliases included Super Omrley, Karl Tut, Dickly Mang, Dick Tau, and Easy Louie. It’s a signal that as deep and wide as the Phalanstery’s esoteric references were, the Tylers maintained a certain playful lightness about it all, even as they mixed paganism and Christianity and Buddhism and astrology and Jungianism and various other religious and philosophical modes into elaborate rituals and observances. Members took LSD and other psychedelics at some events. As for the Phalanstery’s role as a funeral society, when a member died, Tyler would conduct the forty-nine days of the Bardo ceremony to help the soul reach reincarnation. 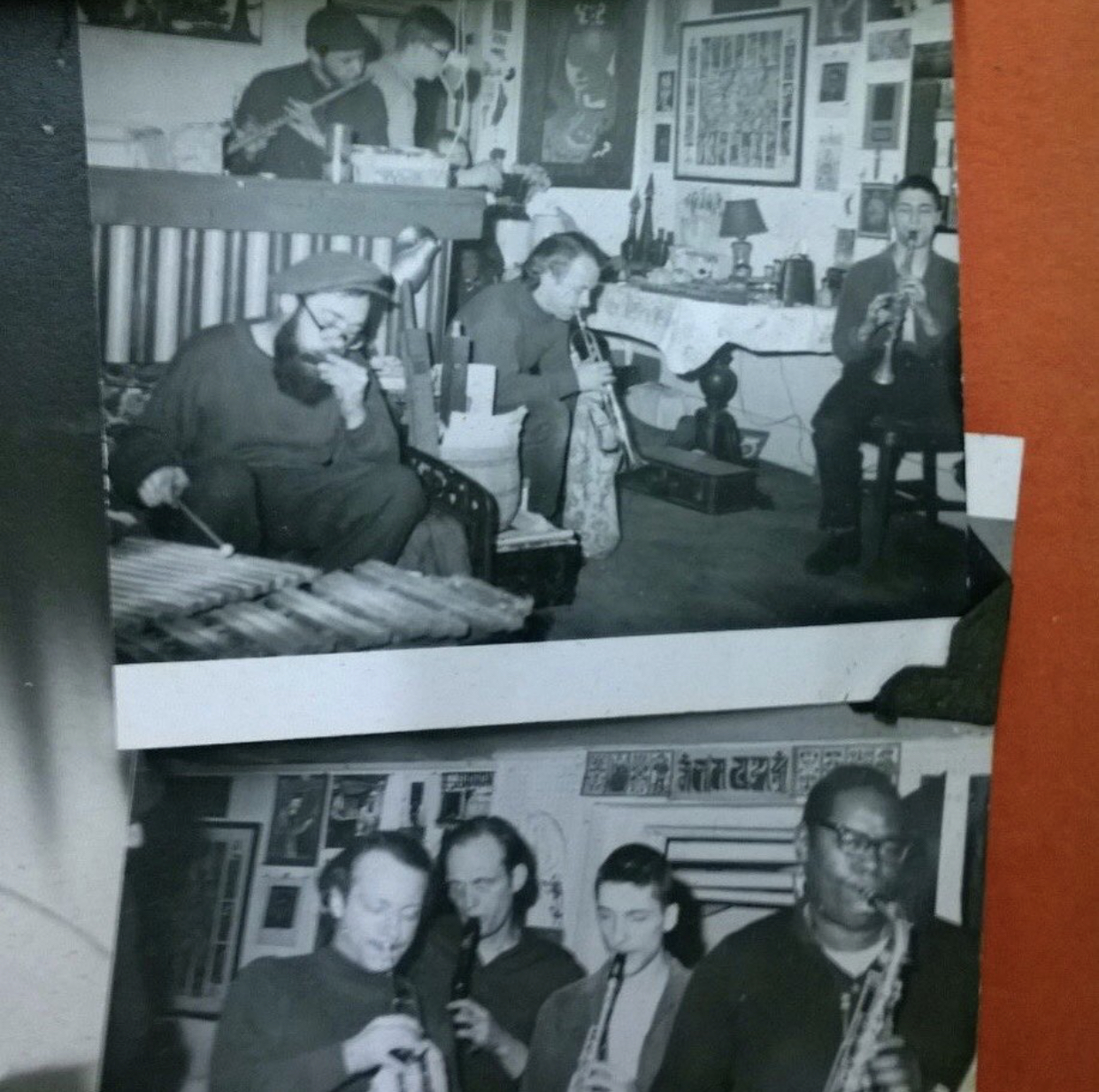 Tyler was, among many other things, a jazz drummer and avant-garde musicologist, and ecstatic evenings of communally improvised music were central to the Phalanstery’s observances. The composer Keith Patchel likened Tyler’s musical theories, which involved astrology and numerology, to John Cage’s. Bill Heine, another artist who was also a magician and a jazz drummer (he played with Charlie Parker), remembered that Tyler had musical instruments all over his place. “As many as thirty or more of us came over there for his Lyceum feasts, and Richard would record us playing the instruments—often people would play an instrument that they had never played before—and it sounded amazing.”


Tyler’s tattoo art was decades ahead of the curve. He was influenced by yakuza tattoos and other Pacific and African traditions well before the era of Modern Primitives and tribal tats. At a time when much tattoo design came from commercial "flash,” he was personally designing tattoos to fit the tattooee. As in most everything he did, he added layers of the mystical and magical. Jungian archetypes and astrological signs played roles in the choice of designs and symbols. Most remarkably, he acquired esoteric compounds from the Dalai Lama’s apothecary, substances like crushed pearls that had mystical and medicinal uses in Tibetan practice, and mixed them with his tattoo ink.

Tyler was also a master woodblock artist. Tattoo artist Michael McCabe has written, “After an initial meeting with Tyler where the tattoo designs were discussed and chosen, he would use his master woodcutting skills to carve woodblocks of the small symbols or images. These were then used like ink stamps, much the way traditional Thai tattooers use wooden stamps to transfer their tattoo images to the body.”

Under the rubric of his Uranian Press, Tyler wrote, illustrated, printed, and distributed a stream of pamphlets, booklets, broadsheets, astrological calendars, Xeroxed collages, and lithographs. This is where the pushcart comes in. Tyler loaded it up in his basement and trundled it over to just outside Judson Church, where he or a designated backward-named Uranian would sell items on the cheap. Densely packing hand-lettered words and woodcut images, they’re mysterious, mystical, profane, comical—all at once. 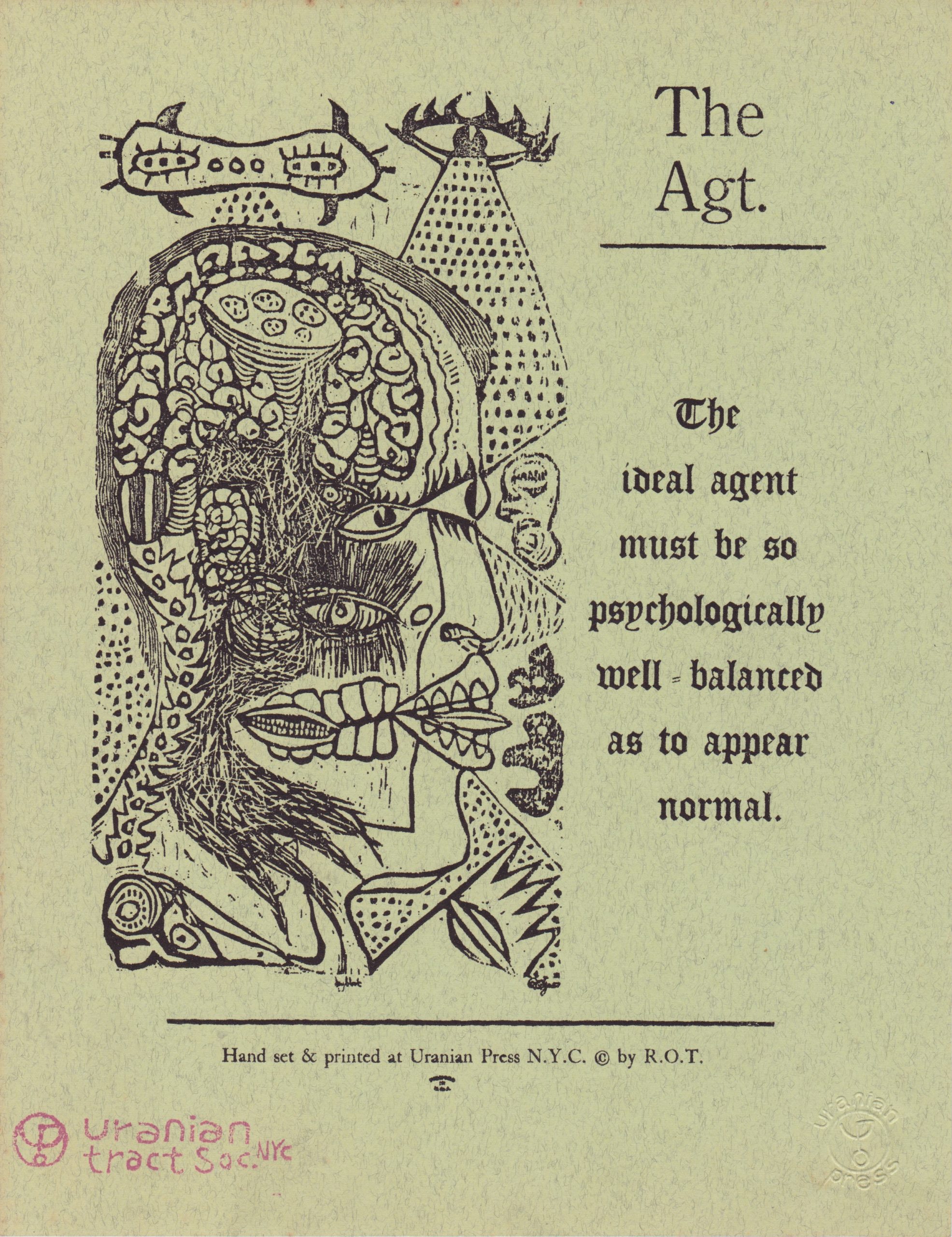 Richard Tyler died of cancer in 1983. Dorothea passed away in 2012. Besides Oldenburg, it’s been said that Timothy Leary was influenced by Tyler’s knowledge of Eastern esoterica, and Ornette Coleman by his musical theories. The pioneering tattooist Thom deVita was a good friend of the couple, and closely followed their doings. Still, the Tylers remain obscure figures in standard art histories. The Uranian Press materials may represent the most permanent record of the Tylers’ personal multiverse. Maybe someday somebody in the art world will study them and assign them a more visible place in the history of downtown Manhattan culture in the decades after World War II, when New York City was, for a time, the art capital of the world, and the Lower East Side one of its busier quarters.

This is an excerpt from a book in progress, Offbeats: Lower East Side Portraits, by John Strausbaugh and Clayton Patterson.

John Strausbaugh’s books of history and cultural commentary include City of Sedition, about New York during the Civil War; The Village, a history of Greenwich Village; Black Like You, a study of blackface in American culture; and Rock ’Til You Drop: The Decline from Rebellion to Nostalgia. He is a former editor of the weekly New York Press, and has written for the New York Times, the Washington Post, the National Review, the Wilson Quarterly, and other venues.