Most people are aware of the presence of CCTV cameras in major cities. Bangkok is no exception. There are apparently 10,000 of these eyes tracking your every move. CCTV cameras play the modern role of medieval gargoyles, staring down, watchful, vigilant as you go along your way. Looking to keep you safe, out of trouble, and like a good Nanny ever mindful of your welfare. CCTV cameras have become that Orwellian eye that will never let you out of sight once you step into the street.

Let’s put this way, some Nannies are better sighted than others.

The news of 500 fake CCTV cameras has local officials scrambling for an explanation. This is the tentative number. Like many round numbers it may well balloon as the investigation continues. And as one would expect, some of the explanations sound as real as the cameras. One official did what you would probably do: pass the buck to the Traffic and Transportation Department telling them to address the problem and explain to the public about the fake cameras.

Sure enough the department complied, saying that fake cameras were set up near hospitals, schools and areas where political rallies were normally held. Those are exactly the areas I’d choose to put fake cameras. If you can fool anyone, it’s got to be the ill, students and demonstrators. These people see a camera and believe it is watching them hobbling down the broken pavement on crutches, or clutching schoolbooks, or carrying banners and hand clappers.

As with many of these stories, the more they explain the more you wonder if the real cameras ought to be inside the office of the official explainers. We are told that those who had been a victim of a crime had asked for footage. Something that might be useful to identify the wrongdoer. The crime victims were told the cameras were ‘broken. The original story surfaced on Pantip website and the mass media seeing blood in the water dove in. Nothing better than a story about ‘fakes’ in Bangkok to start a feeding frenzy.

In a broad definition (remember Clinton’s definition of ‘sex’?) the CCTV cameras were indeed broken. But it is a bit like saying the life scale dummy of a police officer at a busy intersection can’t testify as a witness to a road accident because he’s lifeless.

Officials have said that many dummy cameras can be found on Ratchadamnoen road along with real CCTV cameras. Makes one wonder whether there are any casinos along that road? Just politely asking.

“I’m sorry for the people who asked police for footage and images from security cameras for evidence against suspects but the BMA told them that the cameras were broken when the in fact they were dummy cameras.”

Dummy cameras they are admitted to be, but “don’t call them fakes,” says the Bangkok Governor MR. Sukhumbhand Baribatra.

Resisting the word ‘fake’ in favor of the word ‘dummy’ is a slippery slope. If it were a story about a ‘fake’ cop would the good Governor counsel that the press should refer to the person as a ‘dummy’ cop? Given this is Bangkok, it is understandable the desire to avoid the word ‘fake’ as that does draw a lot of international attention that authorities would wish to avoid. 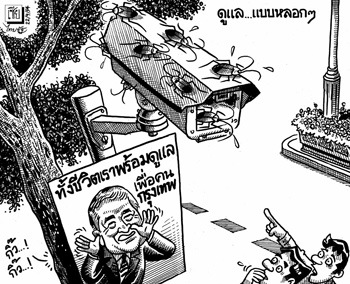 A great cartoon appeared in the Thai-language popular daily ThaiRath :

The poster (with the image of MR. Sukhumbhand on the lower left) reads: “Prepared to take care of Bangkokians for life”

The caption (on the upper right corner) reads: “Taking Care… In Fake Style”

But Bangkok citizens have been assured by the city authorities of their commitment to replace the fake cameras with the real ones. We don’t exactly have a timetable when this will happen but I am certain in six months someone will pop the question as to whatever happened to those ‘fake’ I mean ‘dummy’ CCTV cameras, and I will yet have more material for another blog.

“Bangkok Governor Sukhumbhand Paribatra said on Tuesday the fake cameras were intended to help scare off criminal activity. Later, when City Hall, had the budget funding, it installed real ones.” The Governor has watched over the installation of 10,000 CCTV cameras, and promises another 10,000 will be installed on his watch.
What remains to be released by authorities is the cost of the fake cameras. Did they get a discount from the price of the real cameras? And how did the workers installing them know whether a camera was a fake or not? Were they told? Could the workers have mixed them up? Is there someone assigned to go around and test the camera? Will that test distinguish the real and fake cameras? Would some owners pay to keep the fake cameras in place? What will they do with the fake cameras? Auction them? Burn them? This could get quite interesting.

Fake CCTV camera need to be placed in context. There is a bit of a history to recall. Bangkok watchers will remember the GT200 devices (from the UK) purchased in large quantity and at major expense for soldiers to use in detecting and clearing roadside bombs in the South. The company making the GT200 got into hot water in England after it was disclosed the devices couldn’t distinguish a frog or banana from a bomb.

What was the reaction in Thailand when it was discovered there was no science at work inside the GT200? Denial. First thing to remember is all of GT200s were ‘fake’ in the sense that they didn’t work. Only they weren’t bought as ‘fake’ devices but as the real thing. But apparently the fakes did give ‘comfort’ much like an amulet gives comfort. Officials at the time said they many soldiers had ‘belief’ or ‘faith’ in GT200 devices as assisting them in finding unexploded roadside bombs. That seemed to close the debate down.

So far no Thai official has come out and said they had ‘faith’ that the CCTV fake cameras worked, but apparently officials had ‘faith’ the fakes would fool the public. Indeed Apriak the prior Governor, and M.R. Sukhumband, the current Governor, have taken the position that the dummies who live in Bangkok were deterred by the fake, I mean dummy, CCTV cameras.

Now that it is disclosed there is (at least) a one in twenty chance that the CCTV camera watching over your illegal casino is fake, you can play the odds. Take a flutter. Big Brother might just be faking it. He’s not really watching you. But there is a nice symmetry at work: Fake cameras watching over roadside vendors selling fake Rolex watches, fake Viagra, and fake perfume to a number of fake tourists who are really ‘brand’ agents seeking evidence for a bust.

What do we hear from City Hall about the fate of the fake cameras?

He added that 10,000 CCTV cameras under the Pracha Wiwat scheme were operational and 20,000 more cameras will be installed in the capital within next year.

“Bangkok Governor Sukhumbhand Paribatra said on Tuesday the fake cameras were intended to help scare off criminal activity. Later, when City Hall, had the budget funding, it installed real ones.”

If it turns out that one out of twenty of those beautiful Thai smiles are also fake, that’s probably a better ratio than in most other countries. Still it is a worry for the Tourist Authority of Thailand, which may have to go back to the drawing boards for a new campaign to bring travelers to the Land of Smiles. “Thailand Mostly Real” or “Enjoy! You’re Safe with Our Dummies.”