Andrew H. Shirley is a multi-media artist, film maker and poet obsessed with the culture of the weird and deviant.  His debut feature film Chicken Pox (2008) has somewhat of a cult following after spending a couple years screening throughout North America and Europe. He lives with his cat Myrtle in Brooklyn, NYC.

William Thomas Porter is owner of Porter Cycles, a Brooklyn based, independent, custom, and creative.  Coming from a background in refurbished and altered bikes, Porter Cycles is now building custom bicycles or varying design from scratch.  The emphasis is on creative and experimental design backed by years of fabrication experience.  In the mind of Porter Cycles, the bicycle serves equally as functional vehicle, art object, and community staple.

The two met at a Black Label Bicycle Club bike event in New Orleans on New Year's 2009 and a year later co-curated a bike themed art bizarre Weird Bikes Weird Art  with Brooklyn based artists to raise start up money for Porter Cycles. The Fuck Bike #001 (2010) is the first collaboration of a series of these works for a two man show in the Spring of 2012. 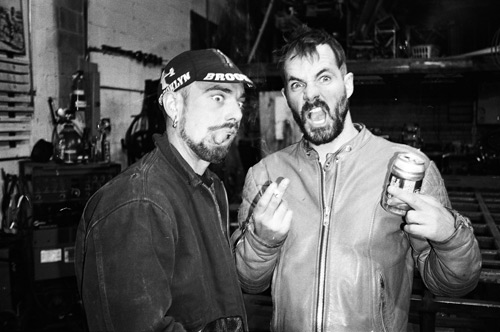