Originally published in The Evergreen Review Issue 123 in June, 2010. 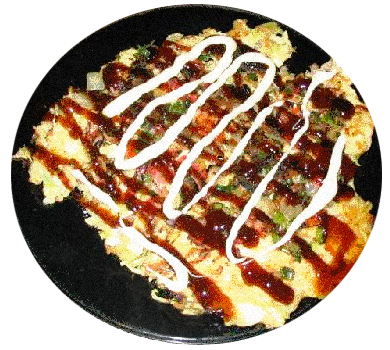 My friend Birgul told me about the Okonomi-yaki today. It is sometimes called the Japanese Pancake, and sometimes it is called the Japanese Pizza. It is savory, not sweet, a little bit like an omelette or frittata, and it is made with flour, eggs, cabbage, pork, shrimp and topped with sweet sauce, mayonnaise, dried seaweed, and fish flakes–lonely, lonely fish flakes–you can’t imagine. There are over 30,000 restaurants that serve Okonomi-yaki in Japan, not to mention all the street vendors, walking along the crowded streets of Tokyo, in their own small, separate worlds. Oddly enough, there are only one hundred or so venues that serve Okonomi-yaki outside of Japan! Naturally, because of all the variety of pallettes and venues, much variation occurs in the design of the Okonomi-yaki. In fact, the truth is, there really is no single best recipe for Okonomi-yaki, or at least, no one can ever agree upon one, which makes me really sad. I called up a friend the other day and told him that there really is no single best recipe for Okonomi-yaki, and how people are always fighting, and he felt really sad, too. I told him that there is a lot of creativity involved and many different variations on the recipes of Okonomi-yaki, but he said it didn’t matter, and then grew silent, watching the empty streets below. Look, I said,  Okonomi means "as you like it", in Japanese, but he said Still, it doesn’t matter,  Be creative! they say, and I told him so: you never know what you might come up with! No matter what you come up with, this is not love, just like in the songs from the old days, when we were children, when our fathers were still alive. Sometimes I think, on nights like this, I like my Okonomi-yaki with pickled ginger, bacon (!) green onions, Chinese sausage, and Tenkasu. When we were children, I remember my father rarely ate Okonomi-yaki, but would often say: it doesn’t matter what you accomplish, or who you know, or who you love, at the end of the day. you are still alone, eating a bowl of rice. My father adored rice. I adore Okonomi-yaki. Sometimes I like to think: a man is eating a bowl of rice in a kitchen late at night or a big dish of Okonomi-yaki near the sea, close to the waves along the shore, where no one goes, and no one can hear the sound of the waves but you. Love, what is that? You know what I like best? I like kewpie mayonnaise in my Okonomi-yaki. And always, pickled ginger. In the summers, Okonomi-yaki is so amazing, by the shore. You never know about Okonomi-yaki. It can surprise you. I see the sea, touching the shore. What is it? Okonomi-yaki. Okonomi-yaki  is really no different than you or me.