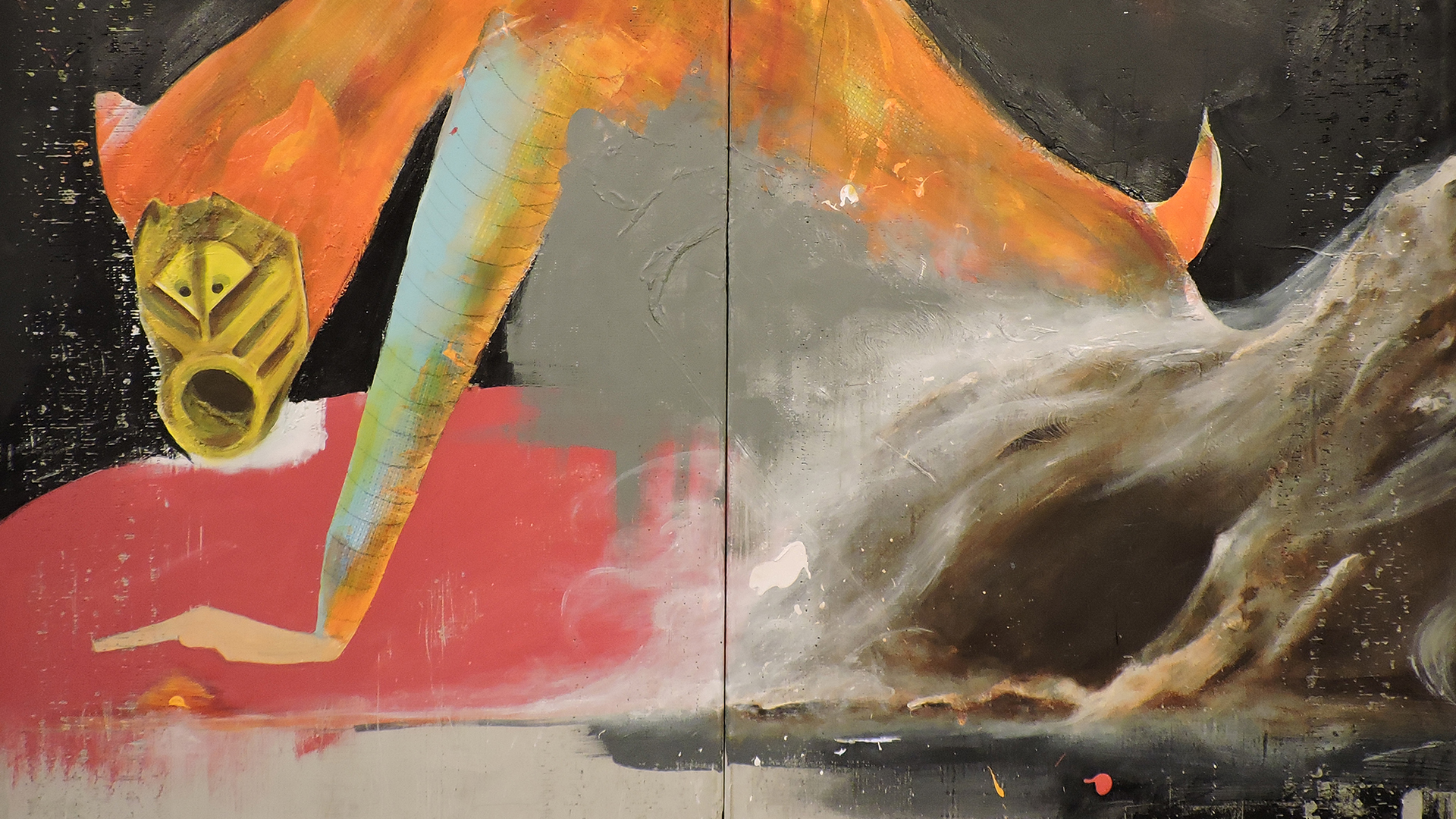 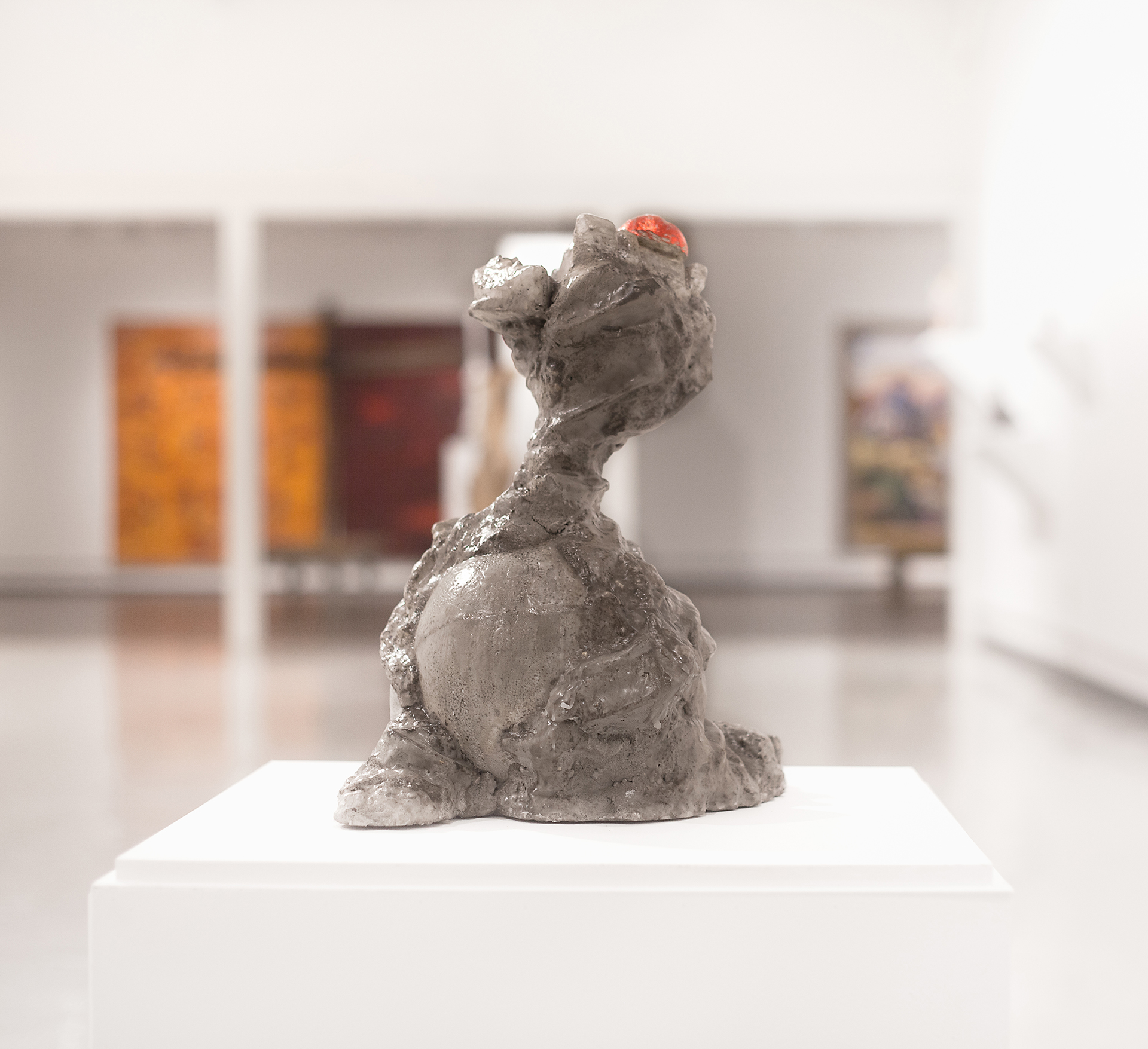 My watch stopped working in March right after the pandemic overwhelmed New York. I knew it only needed a new battery, but going out to get one had become unthinkable. For a while I wore it anyway and even kept consulting it, but time remained frozen at 10:15. I took it off and left it on top of a pile of unopened mail.

In October, feeling rather daring, since I had not come down with the virus, I brought the watch to the jeweler’s, only a block away, and decided to replace its worn strap as well as the defunct battery. The clerk said I could wait in the empty shop for the work to be done, then took the watch behind the scenes. It wasn’t long before a second man, older than the clerk, came out and beckoned me over to the counter. I was shocked when he reached for my left hand—What was he thinking?—but I stood there transfixed, unable to pull it back. He strapped the stiff new leather band around my wrist as if doing it for a child, then gently turned my hand over to make sure of the fit. Even hours after he relinquished my hand, I could still feel the warm, slight pressure of his fingers. It was the first time in eight months that a human being had touched me.

Because I am old—in fifteen years, I will be either dead or 100—my pandemic has been largely unpeopled, although it hasn’t been the penal solitude of solitary confinement. My cell is roomy and pleasant, although it’s in an increasingly disorderly state: Its two large windows allow me to keep an eye on the street, where life stubbornly continues. I keep checking to see what’s happening in the cafe just across Columbus Avenue. There are always at least a few diners under its white tent even in the coldest weather. I used to eat there, meet friends there, myself. I also used to stop in at the ice cream shop next door; my favorite flavor was pistachio. Because the ice cream shop has never been more popular, I feel it would be a source of danger for me. Even during the worst of the pandemic, when the cafe and everything else on the block was closed, people lined up outside it. I took a picture of them with my iPad as they stood raptly in the dark, their gazes drawn toward the white glacial glare of the storefront, as if they were awaiting transport to some Planet of Before. 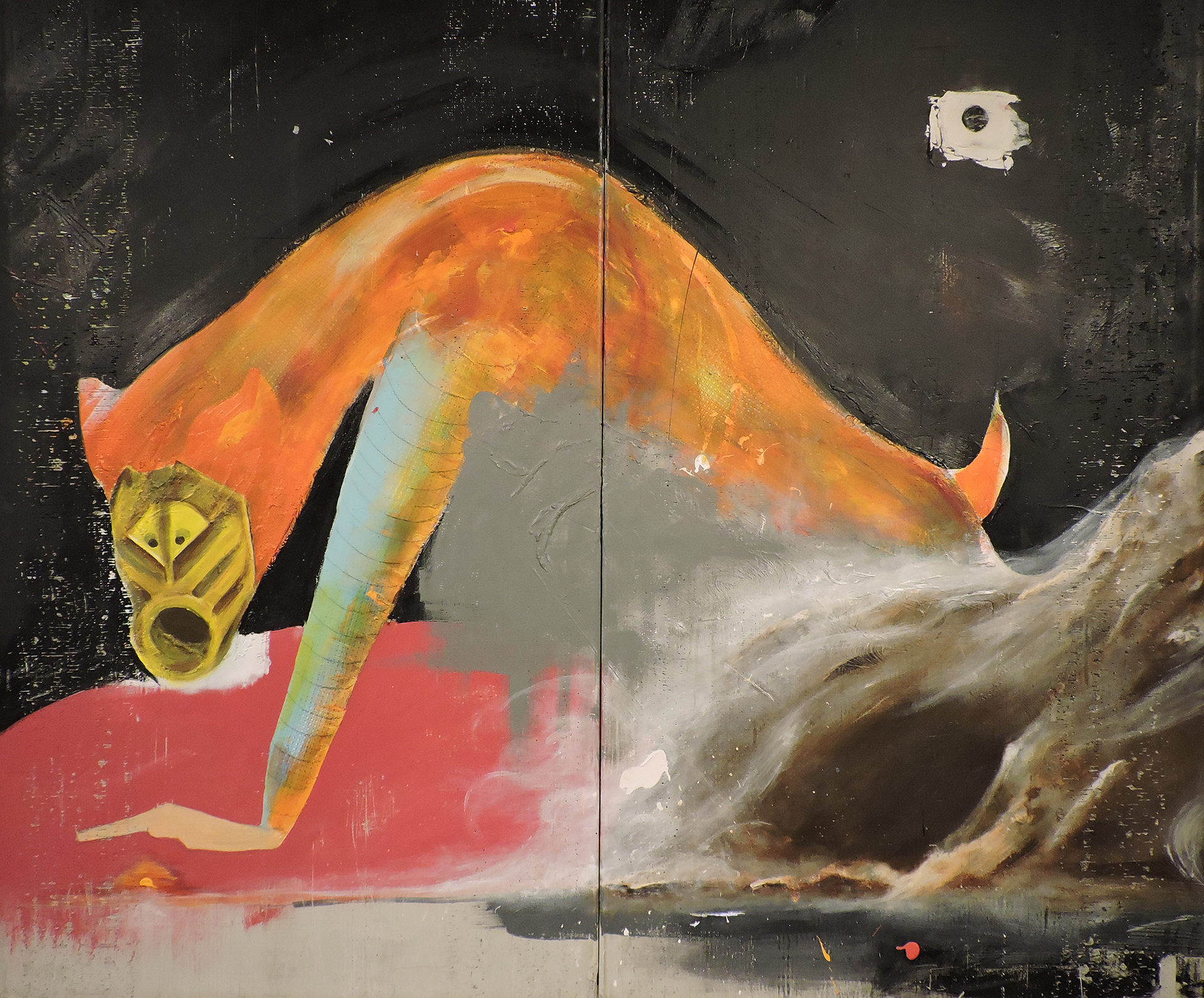 Luis Sahagun - A Goodbye Kiss (2016).
Acrylic and joint compound on cement board. 72x60 inches. Courtesy of the artist.

In the summer I watched from my window as a contingent of Black Lives Matter protestors marched up Columbus Avenue. Everything in me wanted to rush downstairs and join them, though my unsteady elderly presence would have been a liability (as they continued their procession uptown, the police would soon brutally close in on them). All I could do was open a window so the marchers could hear me cheering and lean out to take another picture. It was exhilarating to feel myself right in the stream of history despite my isolation.

I am still living these days primarily on my couch. There is a thickening bed of dust under it that I never quite get around to tackling, like the story I wrote last fall that I keep meaning to revise. I’m waiting to be paroled, though I’m not sure how much of my former life I’ll be able to resume after I get my second shot. I’m weaker. It will be harder for me to get around the city. My world has shrunk to four blocks of Columbus in either direction. None of the people I feel closest to live nearby.

My two best friends, whom I met in my early twenties, still live downtown in the East Village, which might as well be Kansas. We stay in touch on our landlines. Since they’re both proud technophobes disdainful of Zoom, it’s only the way their voices sometimes sound that tells me how much the pandemic has stolen. When we were young, our lives were like operas. Now they’re essentially plotless. “Today I did the laundry,” one of us will announce just to stay a little longer on the phone.

“Is it still January?” L. asked me today. “Believe it or not, it’s February.” “Oh well,” she said, laughing. “Who cares?” These days we talk mostly about the past, the parts of it we shared, as well as L’s Brooklyn childhood during the Second World War, a subject she keeps returning to lately, telling me things I never knew. “Do you find this a strange time?” she asked me just before we said goodbye, like the strangeness had struck her all over again. 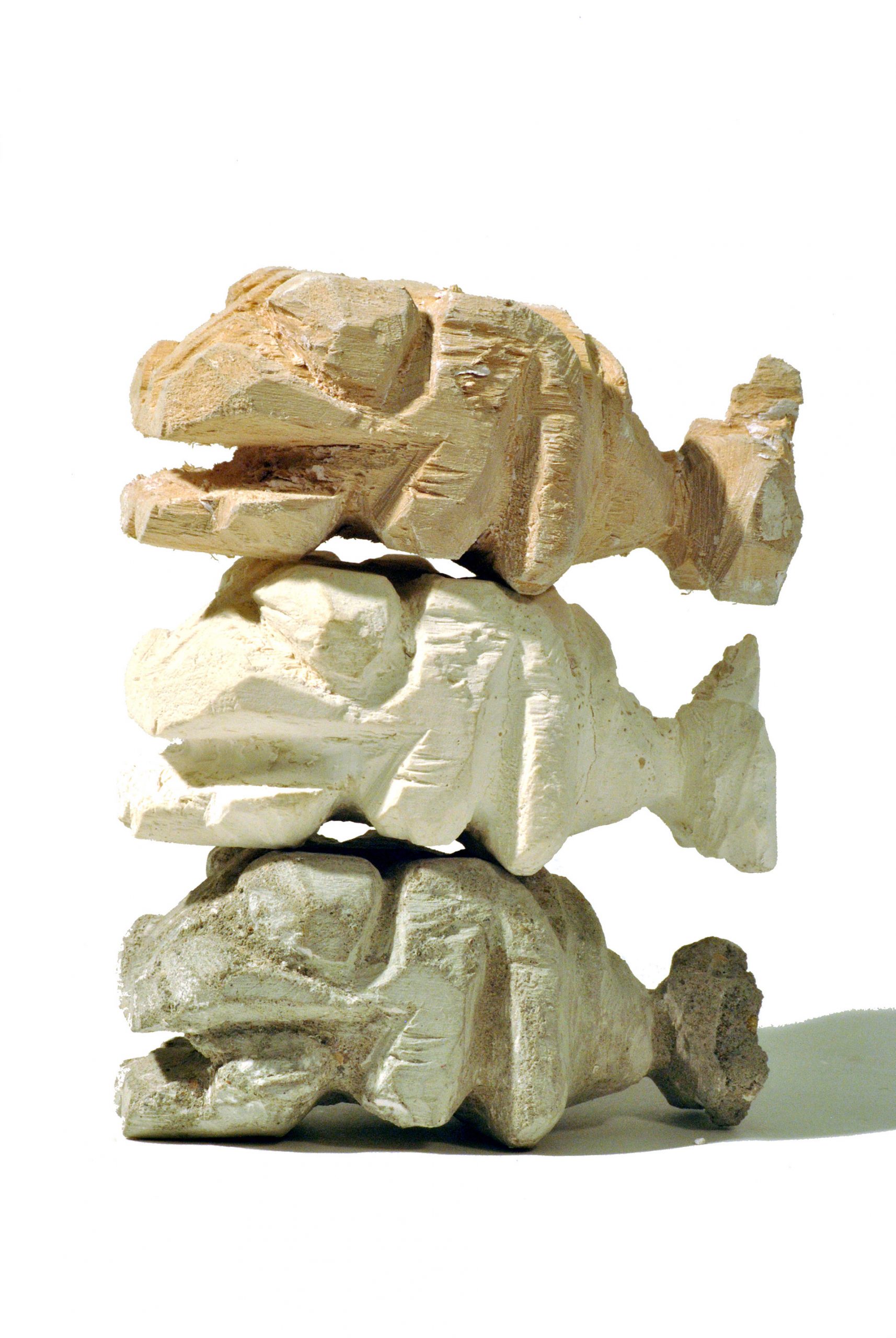 When I do go out, which isn’t very often, I’m astonished by the sheer pleasure of feeling the sun, the currents of air moving across the few bare inches of my face. If there aren’t any other customers waiting in the Muffin Cafe, I will allow myself to enter and buy a coffee to go. The proprietor always greets me warmly. Because of our masks, we recognize each other from our outlines, working from memory to fill in what’s missing. I find an empty table outside and look at the stream of strangers passing by, attempting to assemble faces for them from the little that isn’t covered. Then I walk down to the fruit and vegetable stand on 68th. The guy there, as usual, acts like he’s looking out for me. “Go home,” he says sternly as he gives me my change. I should go out all the time, I tell myself as I walk back to my cell.

As I sit on my couch, I keep turning my eyes toward my plants. I know them all intimately and they know me as well. If I am feeling blue and neglect them for a while, they drop some of their leaves or even punish me by dying. If I faithfully water them, they reward me with new growth. Even when they look absolutely still, they are always in secret motion. My monstera plant is the toughest of the lot. I have had it for nearly forty years, ever since I found it abandoned and barely alive outside a laundromat in Plainfield, Vermont. Its ferocious drive to live and take over the whole windowsill is something blatantly visible even when I haven’t watered it for over a week. It extends its long, cable-like roots even though there is no soil to receive them. Its sheathed new leaves gradually unfurl until one day they burst out from their shells, like wet green hands reaching toward the light.

Joyce Johnson’s best known book is the memoir Minor Characters, which won a National Book Critics Circle Award in 1983. Her other seven books include The Voice Is All: The Lonely Victory of Jack Kerouac, the memoir Missing Men, The Lies and Truths of the Sternberg Case, Door Wide Open, and In the Night Cafe and two earlier novels. She was the winner of a 1987 O’Henry Award and a 1992 NEA. She taught for many years in the MFA program at Columbia and the 92nd Street YMHA.

Multi-disciplinary artist Luis Sahagun (b. Guadalajara, Jalisco, Mexico, 1982) produces painting, performance, and sculpture as acts of cultural reclamation. An immigrant and former laborer, he engages the aesthetics of relocation and transgenerational trauma through silicone, lumber, drywall, and concrete. Sahagun has exhibited his work at venues that include the Museum of Contemporary Art Chicago, The National Museum of Mexican Art, and the DePaul Art Museum (all in Chicago, IL), and the Anderson Museum of Contemporary Art (Roswell, NM).