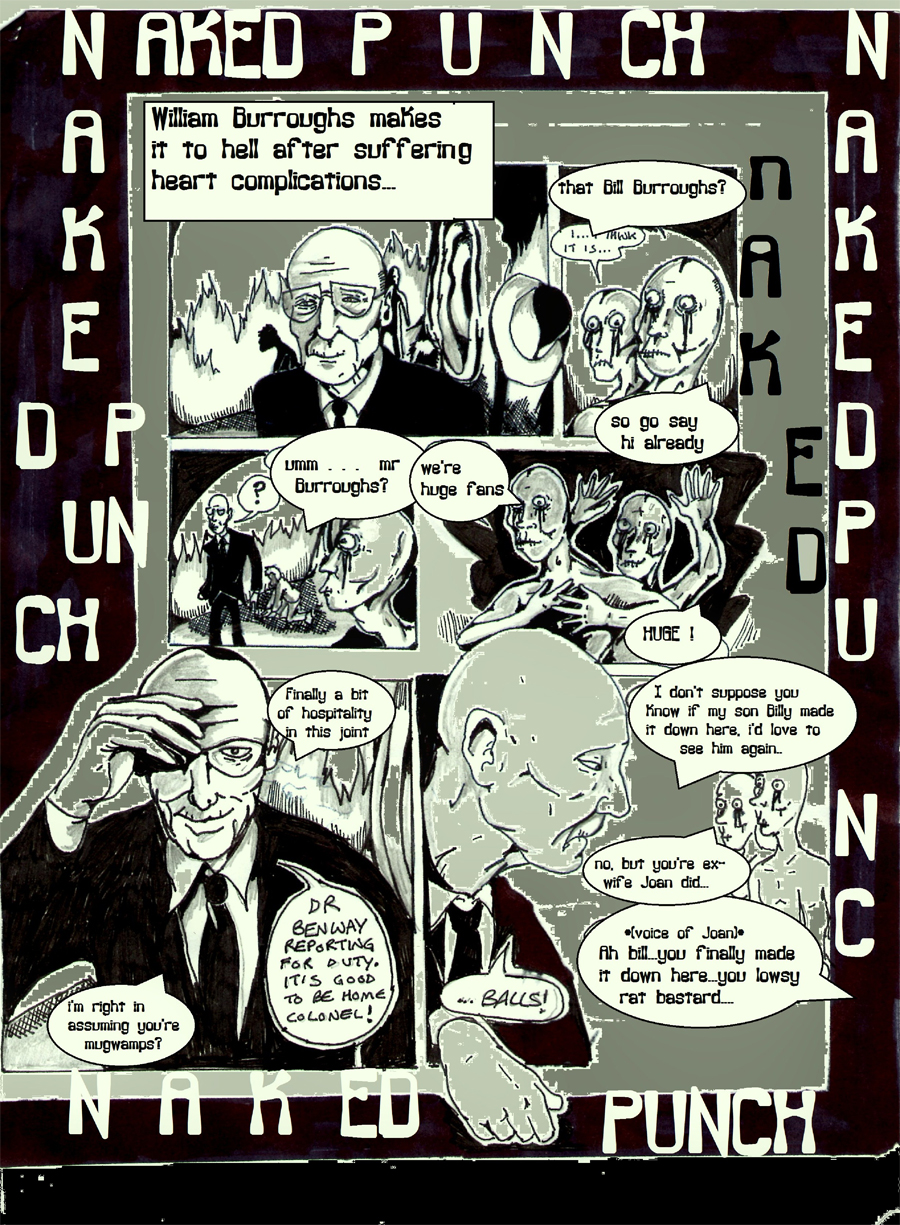 William Burroughs stuck his head into the toilet bowl.

– I really gotta go in there?

The dark, caped figure standing behind him nodded to confirm. Burroughs sighed and got back onto his knees. He stared into the corroded, pebble dashed bowl. A long black, junkie’s turd rested half in, half out of the murky toilet water.

– Can’t I at least flush this away first?

The figure shook its head and whispered – negative. Sensing the figure’s stubborn disposition, Burroughs gripped the side of the ceramic and stooped his neck down into the can.

– God it smells fuckin’ terrible in here! He gargled between mouthfuls of shit water. It was his own bad luck which saw death come visiting in the middle of his weekly defecation. As inevitable as this call had been, Bill never was one to plan for an occasion.

– You think I’ll fit down here?

Silence was his reply.

Once his head was completely in the bowl, he felt two cold, bony hands clutch at his shoulders and dunk him repeatedly. The heroin hoarded turd swished around wildly, breaking up and smearing all over Bill Burroughs. After a few minutes of receiving his swirly, Burroughs tore his shoulders from death’s grip and started wheezing like a fish out of water. He puked up relentless jets of toilet water and dabbed away the russet stains from his face with a handkerchief.

– I’d never fit down there anyway, you tyrant motherfucker.

Death indicated that the best way for him to reach the main pipe was foot first.

Burroughs dually complied, removing both monk-straps and dipping his left toe into the pool of water.

– Just squeeze through the water-way drain and into the waste pipe Bill. Death instructed.

– Easy for you to say, you fuckin square.

Once Bill had squashed himself into the narrow funnel leading into the cistern, a light appeared in the near distance. He headed towards it.

The smell of his own shit gave way to something more complex (and nastier). It was the rank perfume of the sewers. Bill slid out of the pipe and landed in another puddle of gunk. Rats raced each other – on floating tampons or on brown logs. All down the brick walls of the underground, menstrual waste seeped through the mortar.

The smell was deadly feminine, a smell William had no real taste for. There were huge veined marble pillars that rotated, churning the sewer gunk into a blood coloured stew. He spotted a filthy syringe drift by his leg. Bill sifted through the sewage to retrieve it in a way only a drug addict could ever commit to. There was still some junk in the cylinder, so he cleaned the spike with his fingertip and shot the needle home.

When Burroughs withdrew the tip from the hook of his arm, a strange feeling rushed through his body. It tingled the toes of his feet before coursing up through the shin, past the knee, beyond the groin and eventually landing on the underside of his gut with a THUD! He gave an almighty groan.

Day-Glo arrows pointed him in the direction to hell. He followed.

Faced with an endless number of tunnels and dark passageways, Bill rested a moment to consider his current situation. His nostrils flared as a new tide of fecal matter washed over the instep of his feet.

– What happened to good smells like the aroma of a young Tangiers catamite?

Continuing on down the central tunnel, his foot crunched over rods of bone but he kept reassuring himself that he was almost there. The Day-Glo arrows disappeared halfway down the tunnel and he was left in total darkness.

There was a vending machine illuminated under a spotlight that said – INSERT INDEX. TAKE ONE TICKET. Burroughs stuck his index into the slot and he felt a small guillotine chop it off at the joint. A ticket stub spat out the bottom of the machine. Bill stemmed the bleeding with a used-condom sheath, which happened to be floating by, and collected his ticket.

A train tooted its horn from somewhere inside the darkened tunnel.

– Guess I better get moving.

The ticket suddenly exploded into a million fragments in his hand. A voice from a Tannoy declared

As he ran to the train door without a ticket, the engines fired into life and Bill could only watch as his ride disappeared into darkness.

– I missed my train!

– Not to worry Mr. Lee, please come this way.

A tall, good looking man wearing a doctor’s lab coat over bloody scrubs waved him over to a hole in the wall.

– Just pop your head in there Mr. Lee.

– I don’t think so pal, look what happened last time I stuck a part of myself into a random hole!

Burroughs un-wrapped the latex Band-Aid and shook his finger stump in the docs face.

The hole in the wall looked kind of like a gaping asshole, with the off-pink subway walls and the cracked tiles around the precipice. Burroughs put one leg into the hole. He turned to the helpful doc and said