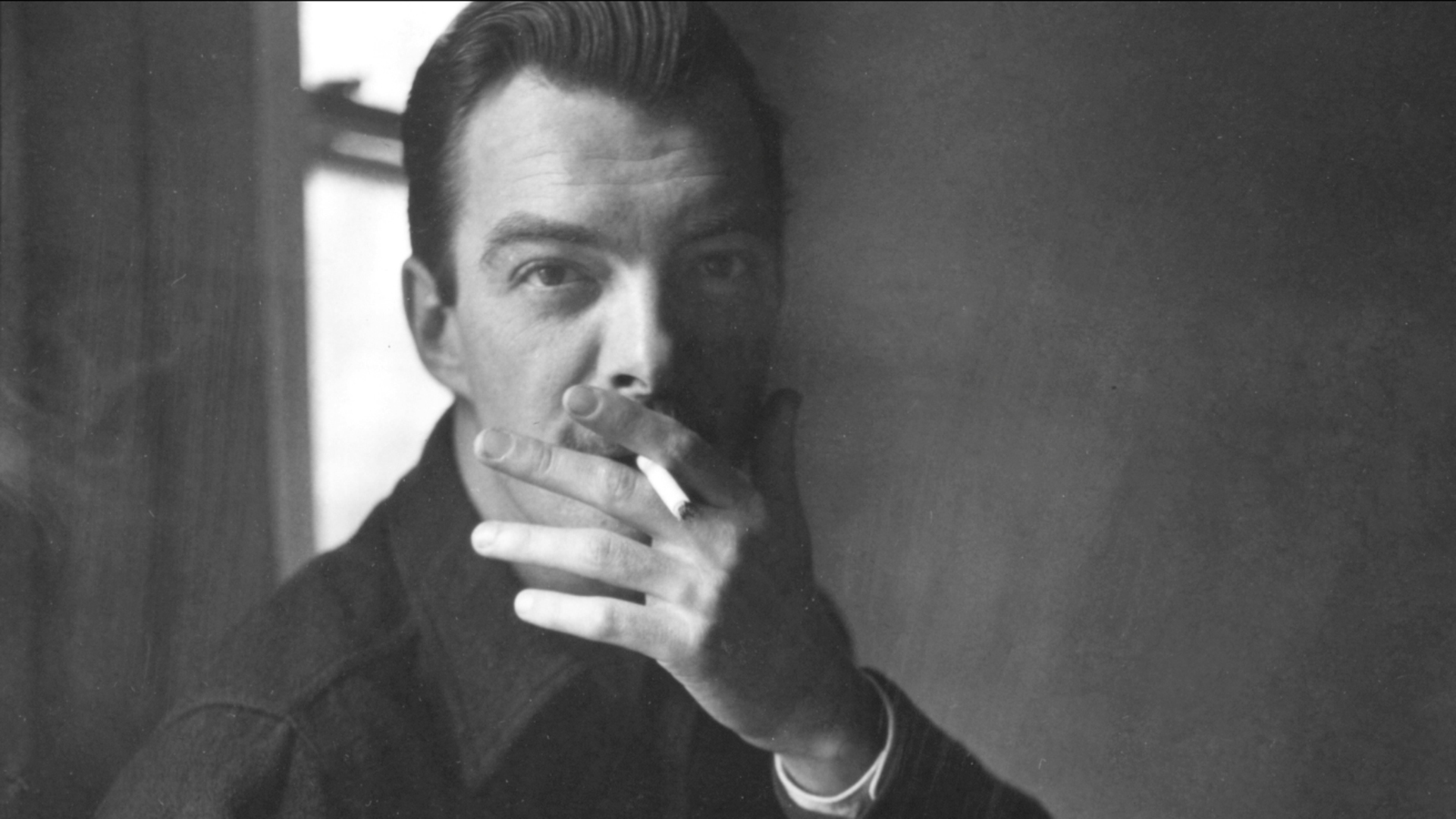 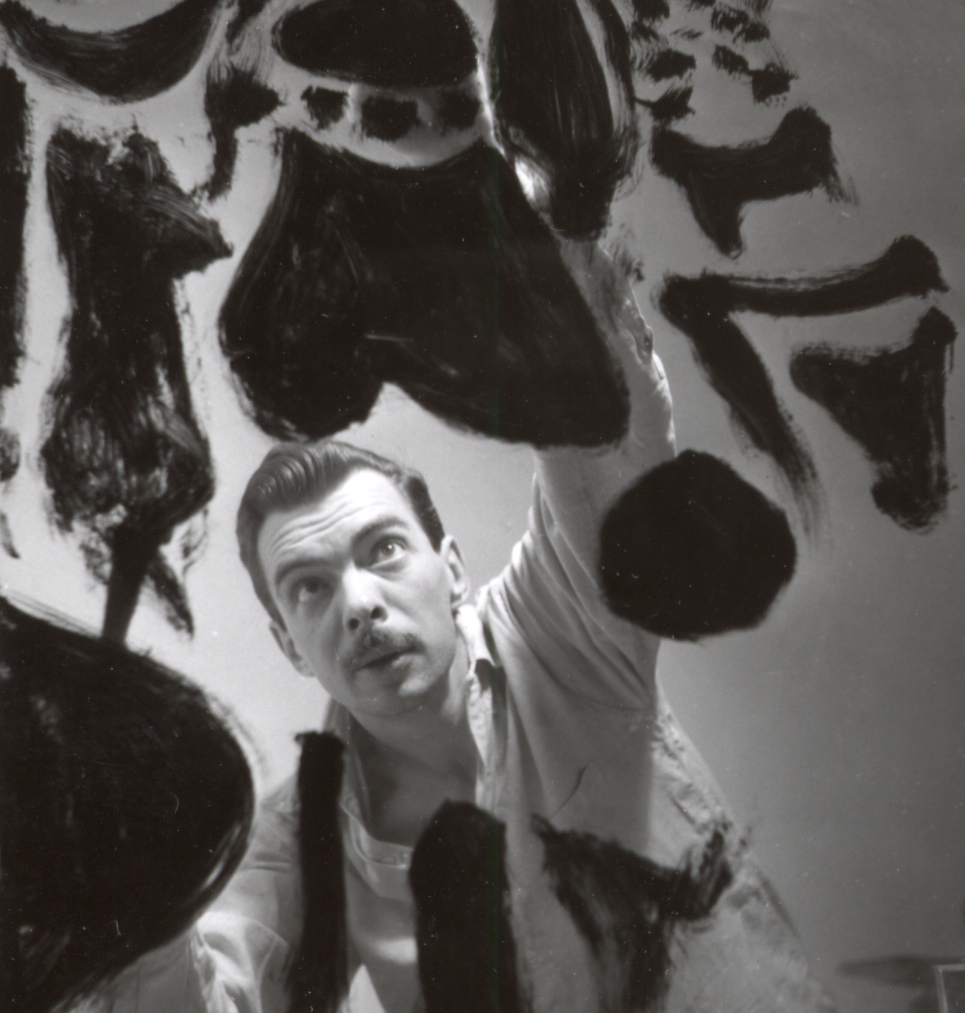 And when this epistle is read among you, cause that it be read also to the Auxiliary Oklahoma Bible and Common Prayer Book Society.

Testicular extracts on the shelf
Beside the gleaming carving-knife
Brighten the bishop’s wakening,
Give promises of both Death and Life.

The branches of the linden trees
Scrape windows in the evening gloom.
The bishop rubs his eyes and yawns.
A dog prowls through the darkening room.

Loud bugle-calls from overhead
Shatter the drums of either ear.
He smiles; upstairs, Aunt Essymae
Pursues her musical career.

“Her tone’s improving,” he observes,
Stroking the dog’s unwilling skull.
His aunt blares out with Baptist hymns,
Near-heresy, but forgivable.

The bishop feels a hunger-pang,
Stifles an incipient yawn.
“Nearer, My God, To Thee” is heard.
He goes to put his collar on.

Note: line 1, Testicular extracts, an allusion to late nineteenth and early twentieth century drugs made from castrated animal testicles used to treat impotence and to increase the muscular strength and mental activity of the aged. 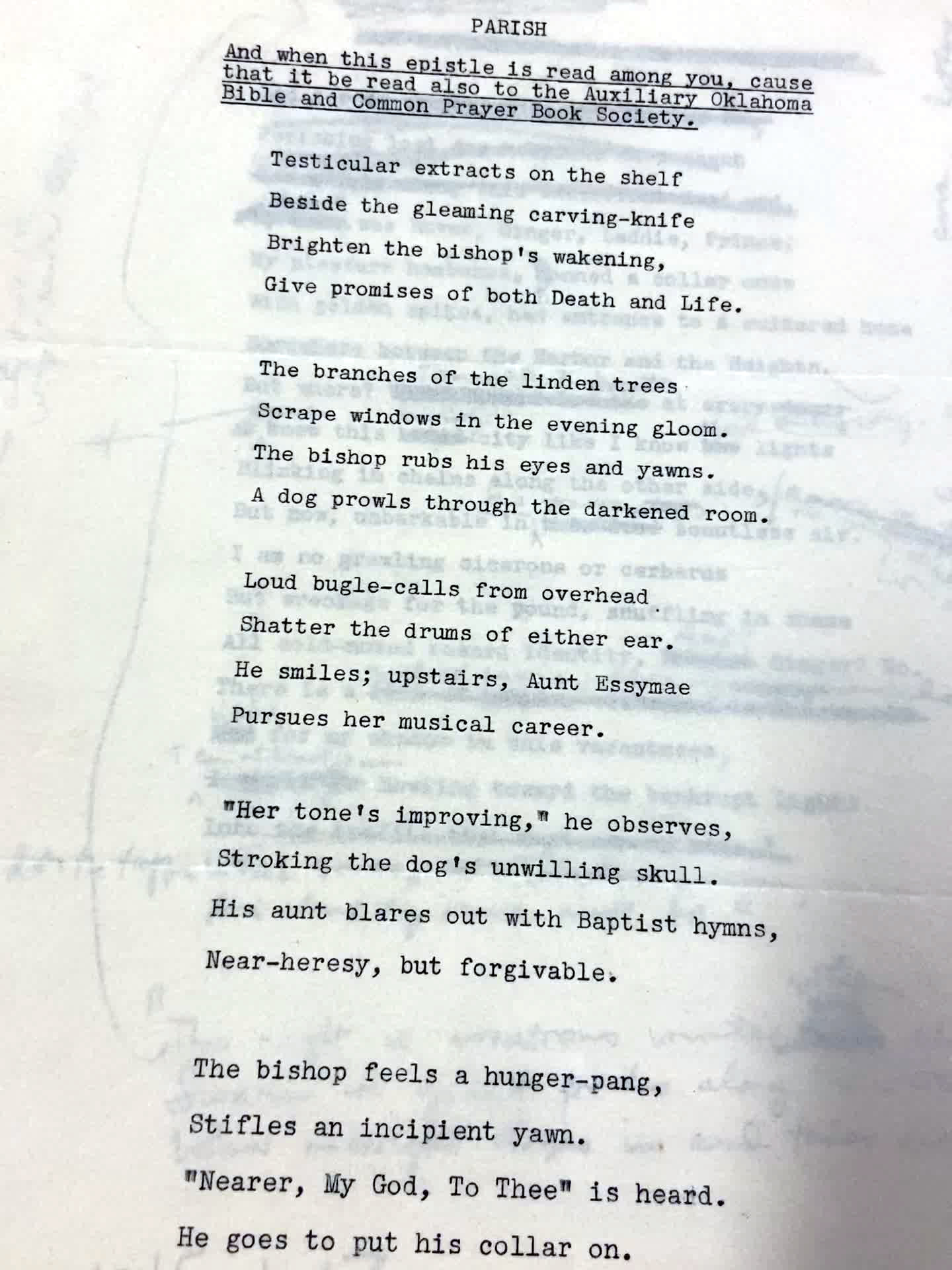 A note on the provenance of “Parish”

In his last years, the poet Franz Wright took great care to see that his papers were preserved in the Howard Gotlieb Archival Research Center at Boston University, a special collection with a reading room that requires white gloves. Franz remembered a tape recording we made for my community radio program in 1979. Over three decades later I still had the tape and made him a copy for his legacy. I still have many letters from him, dating from the time he was living in an Oberlin University dorm. I know where they should go.

The poet Weldon Kees made no such provision for his legacy. On Monday, July 18, 1955, he left some milk and food out for his cat Lonesome and disappeared. His car was found in a parking lot across the Golden Gate Bridge on the Marin County side. During the ensuing weeks, his father, John Kees, a retired hardware manufacturer from Nebraska, came up from his home in Santa Barbara. He met with Michael Grieg, the last person to see Kees alive.

Grieg managed a movie theater that specialized in foreign films, art films, film noir, and silent movies. For this reason, Kees, a cineaste and experimental filmmaker himself, telephoned Grieg in July 1954, ostensibly to get the number of a vintage film collector. To Kees’s surprise, Grieg confessed that he was a great admirer of Kees’s poetry. Soon after, the two became fast friends and partners in various theatrical collaborations that occupied Kees during his final year.

Grieg offered to help the elder Kees by storing Weldon Kees’s papers, books, diaries, and paintings with the understanding that the father was the court-appointed administer of his son’s property. Both cultivated the hope that the younger Kees would resurface. But John Kees—and surely Grieg—knew that Weldon Kees was gone. Indeed, his father gave away a precious few of his son’s abstract paintings—which he saw as superfluous—as well as books to his son’s friends. In this Grieg may have cooperated, but when the elder Kees wanted the bulk of son’s library appraised by a San Francisco bookseller, Grieg didn’t turn over every book and held on to rare first editions. Grieg also kept Kees’s paintings, which he began to sell a year later in 1956. John Kees wrote Grieg and protested both concerns to no avail.

As the 1950s drew to a close, John Kees turned his attention to preserving his son’s poetry. He did possess the bulk of this material but not all of it. With the poet Donald Justice, the elder Kees prepared The Collected Poems of Weldon Kees (1959; 1962), which was first published as a fine press edition and later as a trade paperback by the University of Nebraska Press. But neither book represents the “complete” poems since Justice preferred mature works, a serious voice without the distractions of juvenilia, fragments, and poems that Kees omitted from books but not his oeuvre. 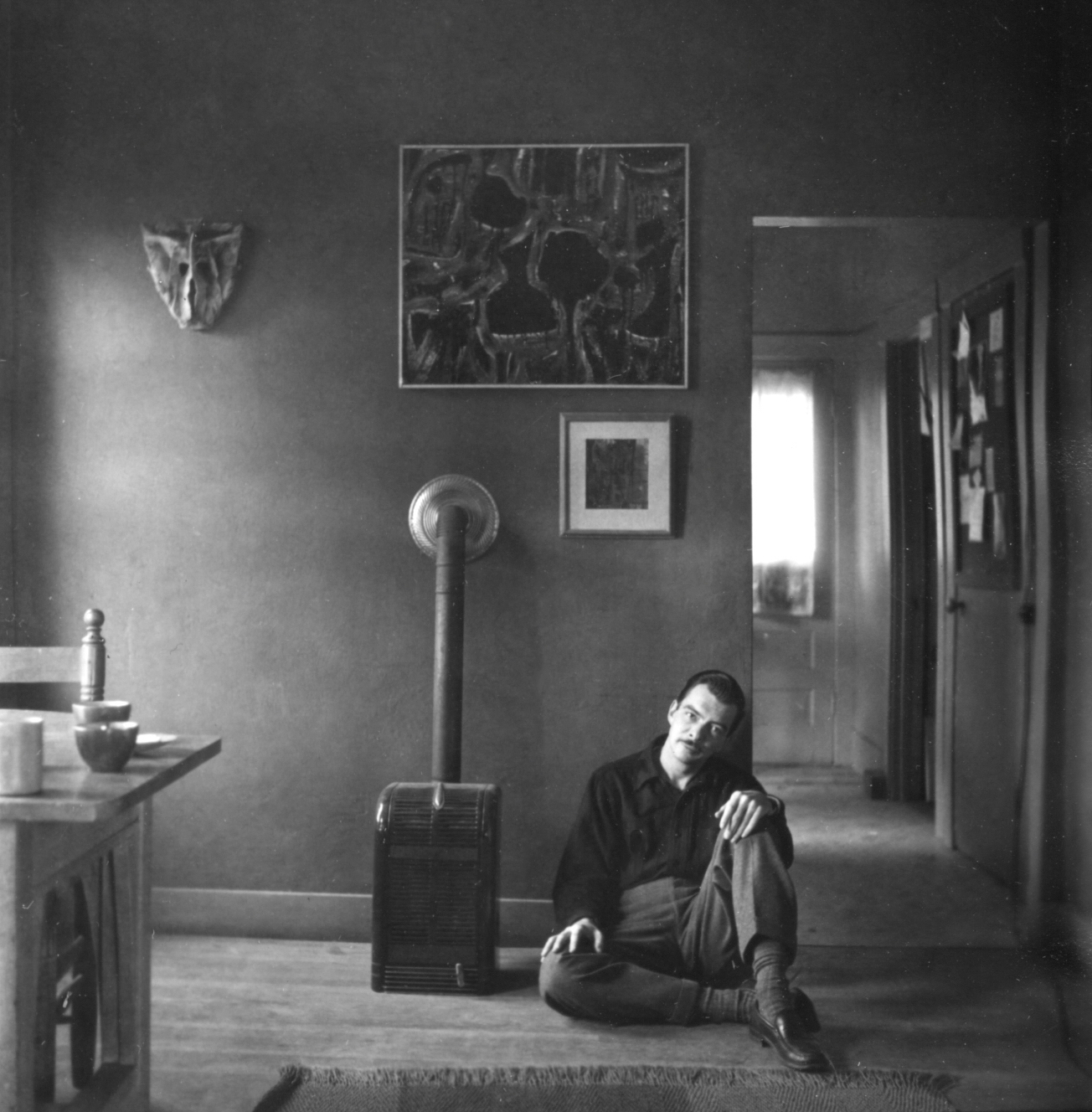 In 1964, both of Weldon Kees’s parents died. Grieg, if he had not done so already, began to sell Kees’s papers, books, and paintings in earnest. Grieg’s heirs made available to me what was left of this material in the 1990s, while I was researching Vanished Act: The Life and Work of Weldon Kees (2003). I saw some of the elder Kees’s correspondence and a copy of Grieg’s 1964 letter to Henry Wenning, a New Haven bookseller. Grieg described what he had to offer, dangling Kees’s workbooks, a manuscript of his last book of poems under the title A Breaking and a Death, diaries, as well as books he “prized above his dukedom,” so to speak. In other words, lodestones for a Kees biographer.

By this time, however, Wenning was dead and any records of his purchases and sales lost. Nevertheless, from time to time, I searched for the items Grieg sold—even after Vanished Act was published. Eventually, perhaps in my lifetime, they would be sold again. I told anyone I could about this material, including the New York bookseller Glenn Horowitz, whom I assisted when a different lot of Grieg’s appropriations were to be sold.2

A quarter of a century went by and then, out of the blue, just before the end of 2020, Glenn told me about an upcoming auction that included a miscellany of first editions but also included personal copies of Weldon Kees’s first two books, diaries, unpublished poems, and the manuscript for his last book when it still bore its disturbing working title, A Breaking and a Death. It was the Grieg lot of 1964.

Kees’s lost papers had found their way to the small rural town of Rushville, Ohio, 150 miles from my front door in Cincinnati. The auctioneer, Mike Clum and his daughter Laura, allowed access to the materials stored in a red barn filled with estate sale antiques and like chattels. We did so on two occasions before and after the holidays and documented virtually everything. The Clums had befriended their previous owner, Murrell Lewis, Jr. He was an eccentric and reclusive man with a doctorate in physics from Ohio State University. He collected books and manuscripts. The Clums said he wanted to “do something” with his Keesiana but he never did and never made known that he had a run of Kees’s diaries. Eventually, Lewis turned to collecting glass objects and like antiques. When he died in 2020, he was virtually impoverished. His lawyer handed over his library and curios to Mike Clum.

Inexplicably comingled in the manuscript of that last book were early poems by Kees, as well as a translation from the German that appears to be a classroom assignment. These extant works attracted my attention as much as anything else in the collection, for in lieu of a Complete Poems, I have overseen the publication of Kees’s lost and rediscovered work to make it available in a kind of uncollected universe, for lack of a better word, that includes magazine appearances, chapbooks, a broadside—and here in The Evergreen Review.

So, why publish this other, younger Kees? He enjoyed writing satirical poetry, much of it social commentary and featuring those American “types” found in Babbitt and Elmer Gantry. For close friends, Kees spiced his letters with limericks. Writing “light verse” was a way not to be an elitist among his own kind, with its Delmore Schwartzes and Robert Lowells taking themselves too seriously. Kees even contemplated becoming the first anthologist of light verse so as to address its neglect and importance alongside belletristic literature.

Kees surely composed “Parish” to be comedy but this early poem “fails” in an appealing way. Here the bitter, sardonic voice of his first New Yorker poem “Robinson” begins to emerge. There is something subversive about the poem that suggests that the darker side of this poet is always dominant even when he is being otherwise. (The same can be said for his jazz lyrics of the 1950s, which he imagined to be torch songs.) This subtext to “Parish” makes it strangely relevant seventy years later. The poem has a certain cruelty to it, something disquieting, not unlike, well, those old New Yorker cartoons that appeared in the same pages as Kees’s run of his Robinson poems.2

1 This material had been generously made available for my book by Grieg’s heirs.

2 And it is no accident that Kees tried his hand at writing gags for two friends he made in New York, the cartoonists Charles Addams and Mischa Richter.

Weldon Kees (1914–1955?) published three books of verse during a career spent in New York and San Francisco. Ever since his car was found near the Golden Gate Bridge in July 1955, his work as a poet, painter, playwright, musician, and filmmaker continues to be recognized and rediscovered. For more writing by Weldon Kees: https://www.beatdom.com/layover-an-attempt-to-keep-a-journal-by-weldon-kees/.

James Reidel is a poet and the biographer of Weldon Kees. His next book is Manon’s World: Hauntology of a Daughter in the Triangle of Alma Mahler, Walter Gropius, and Franz Werfel.

An award winning mid century photographer and film director, Dan Wynn is known for his photographs of personalities, fashion, travel, and food. For more than forty-five years, virtually every prestigious magazine including Esquire, New York, Travel & Leisure, Seventeen, Time, Newsweek, Harper's Bazaar, Mccall's and Women's Day called upon him. His well-known covers appeared on record albums and international magazines and books (sometimes with himself as his model).