An inquisitive boy’s face, dimly reflected in duplicate in a ship’s window, looks out at you from the cover of Bazan Cuba, in grainy black and white, pulling you along his journey, a journey to the people – the salt of the earth of Cuba.

A Sicilian via New York, photographer Ernesto Bazan, looking to recapture in Cuba a time and places of a vanished childhood in Palermo, is finding very personal images of hardship, poverty and forlornness gazing back at you with despair of 1930’s imagery of the great depression in America.
The early/mid 90ies are a “Special Time” in Cuban history, the Soviet support having ceased after the collapse of the Soviet Union. This book covers 14 years from that time forward, until in 2006, he was asked by the Cuban government to leave his adopted home, Cuba, with his Cuban wife and twin sons. 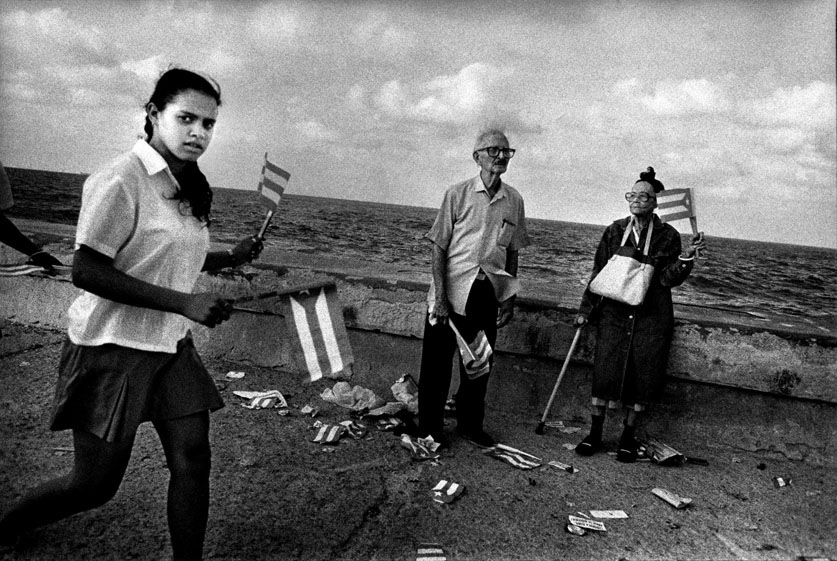 These selected images out of hundreds instill a sensation of forbidden views into a time capsule of a vanishing people – a civilization, of history disintegrating, visions of a ‘post-war’ city reflected upside down in a huge bottle of water carried on a young man’s exposed shoulder through the decay, - though testifying to the strength of humanity, to survival with dignity while waiting for the disappointments of the revolution to pass, as does the single man seated in stillness in a large empty store hoping for a customer to desire something from the meager selection of wares – a few shoes, ties, and hair clips on otherwise bare shelves below a sign reading ‘Offerta del Dia’, - or waiting for Godot ? or sleeping with drunken eyes open on the Malecon, or boxing your way out of a bad dream into life. Bazan reveals in very moving, seductive pictures bare truths and simple joys of dancing and labor, making music, celebrating, and blowing Chardin soap bubbles transposed into grainy warm-black and white; wonder in shining eyes, love and caring; a life force piercing from a very internal life, practicing dance’s excellence for Che in an empty auditorium. I have seen several empty storefronts in Havana being used for ballet practice which is so very important in Cuba, the sound of a sole accompanying piano trailing into the streets.

The viewer/traveler is there with Bazan who seems to be within the image, almost becoming his subjects, not looking in from the outside – he is complicit.
With innocence, love and tenderness the dance of life (in a geriatric home) continues with the corner of an eye perched over a shoulder looking out for death. Havana’s magic comes to life – I can hear the music, feel the Afro-Cuban rhythms in the photographs.
Blood is so very red in the fabulous black and white image of chicken, geese and a sheep, turned away kneeling, watching the slaughter of another sheep, its stripped pelt crouching in a corner below – while humans, a young girl in dance posture and handsome young men, stand gracefully arrested near the back wall - flashes of Bunuel, Balthus paintings and performance, of people moving slowly in a hard dream. There are poignant juxtapositions: a shadowy hand ‘pointing’ to a fingerless porter – leprosy ? Secrets of handmade domino revealed, a stillness in motion, as in the young man walking, carrying a small dead pig on his head on a tray to be roasted somewhere, his eyes closed just as the pig’s. 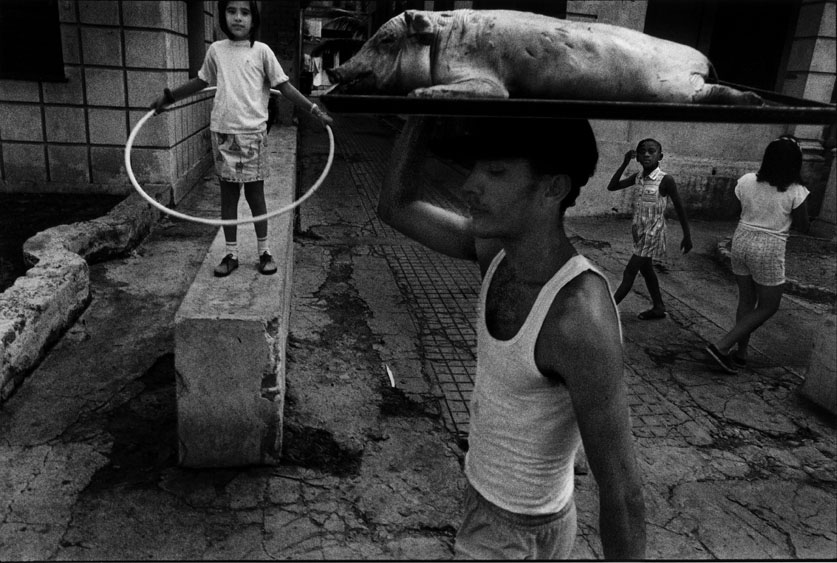 A proud and defiant society of black and white depicted in black, white and gray moving through rooms that are sparsely furnished with bare necessities, like a bed, a bench, a table and chair, a small old icebox, for luxury, serving as a cupboard now for a few eggs and a pitcher of water (electricity is rationed or rarely available), - let you focus on the important matter, Cuba’s people.
Even the very blond Barbie doll looks worn; medicine of poverty where the stethoscope is a cardboard ? cone resting on a mother’s pregnant belly; but somewhere else a large white pigeon of hope is rising wingspread from a grate,
like a phoenix.

Bazan embraces his mentors, Robert Frank being for him the most important, I can see flashes of Bresson and early Siskind among others. Where Diane Arbus found freakishness he presents a Victor Hugo theater of humanity. Secrets and story of each picture are drawing you in but are rarely revealed. Walls, life, slowly pealing conjure images of the East Block from the 50ies and 60ies, or Rosselini movies.
Flat shadowy images of laborers connect to Jacob Lawrence’s gouaches; multi levels of images, negative and positive in one, tell stories twice, sharper, as in Indonesian shadow puppet theater.
Icons of politics are ever present: Jose Marti (history traveling on a bus, Marti’s plaster head in a seat behind a serious young pioneer), Fidel, and Che; and a monumental cigar barely fitting into the mouth of a slight old woman with a gardenia fastened to her hair, invoking that song from Buena Vista Social Club, walking under a 1st of May graffiti; the smoking of dreams, and smoke pollution
are par for the course, and so is religious symbolism in the image of an older Jesus/laborer coming out of the surf bearing the cross of hardship, another, younger Jesus carrying a cross of Christ’s passion through the streets below graffiti that spells ‘Cuba Lives’. Dogs look as lean and hungry as the people.
A Eugene Smith darkness shines from these pages, Gaugin is present in a young girl’s repose daydreaming of sophistication, and ‘Eakin’s boys’ at a swimming hole are far more dynamic and daring here at rocks and the open sea. A Special Forces soldier seems buried alive but risen and transformed into a Samurai warrior.

Bazan employs very personal angles, far and close, looking often through a secondary frame. Even though his would be considered street photography the images seem conceived as from an already existent inner vision, waiting to be found by Ernesto who works with a poet’s heart and a painter’s eye, composition and dynamic. Figures and faces hidden to the first glance, levels of interior/exterior and further interior, and close subtle values, are akin to Bonnard’s technique. Bazan’s printing is intentionally dark, focus often soft,- isolation is felt, isolation of an island country used, abused then discarded, cold war blockaded and abandoned, a country where humans are not in control of their situation, more like actors in a heavy dream ruled by someone else’s script.
Here, the clown does not have to paint tears down his cheeks – his sadness is too visible playing blind man’s bluff. In a later picture a lifelike Lazarus statue draped in
a cape and on crutches stands in a desolate, littered field - a 50ies car in the background. Life is hidden, elsewhere, life is in the shadows; the use of mirrors in several images shows another dimension of that existence. 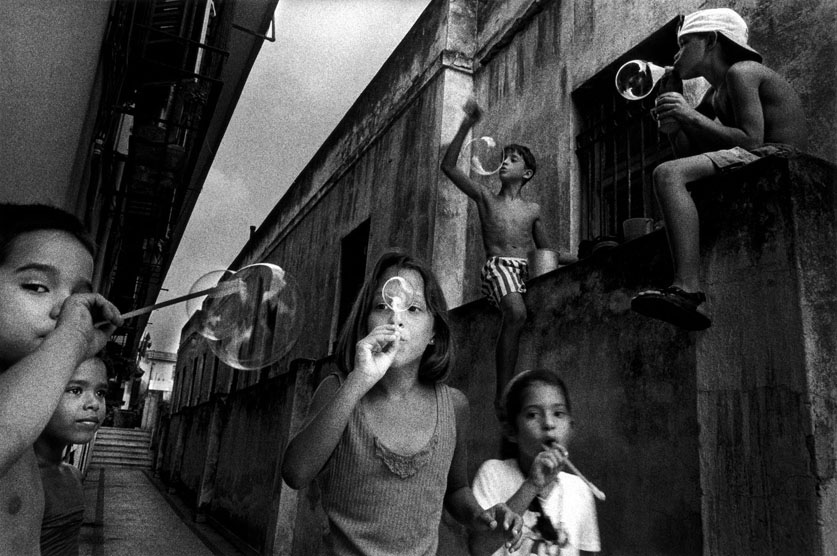 An old wizened couple is standing in suspension amongst the litter of flags and pamphlets at the Malecon (the people’s promenade at water’s edge),– open sea in back – she, supporting herself on a cane with one hand holds up a small flag with the other, he has dropped his, looking tired towards Havana, while a young girl dressed in a short pleated school skirt baring athletic legs is running past them holding two flags and she looks at you with intent and hesitation : the march
has ended.

I am certain there are other sides to Cuba and Havana, especially in the country side and among some wealthier Cubans but I have experienced a very similar focus in 2004.

This handsome (self published for reasons of editorial control), almost square volume is well laid out and the decision to have captions separate in the back and to display thumbnail images in chronological order was a wise one, it keeps the focus on uninterrupted visual immersion which is only broken up by a few very personal, handwritten journal entries creating chapters. The small images show
an overview of Bazan’s compositional dynamic. Vicki Goldberg’s very perceptive, sympathetic and informative essay should be read afterwards, as not to prejudice the experience.

Ernesto Bazan is in the process of preparing another book in color this time, Al Campo, a book about his friend in the countryside region of Cuba.
Times have changed, and color has a different truth.