Beats at Naropa: An Anthology

Iguess this wasn’t put in the Declaration of Independence or the Constitution, but the inalienable value which Anne Waldman and Laura Wright, the editors, ask about in this new book, Beats at Naropa, is one that might well have merited consideration by the founding generation of the U.S. It is contained in this question: Do people have a right to their history? 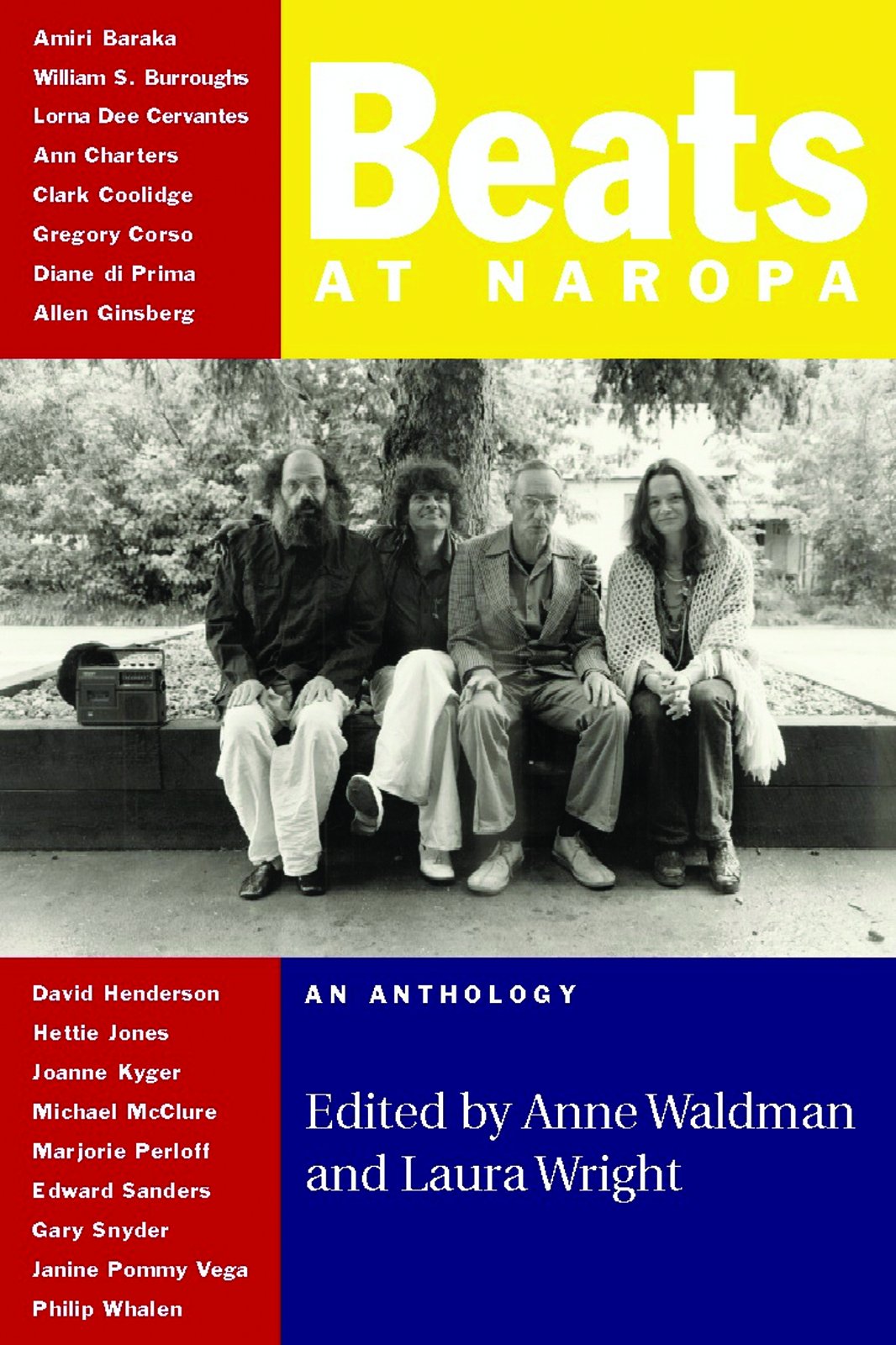 As Steven Taylor in the last piece in the book says loud and clear, “Memory is the object of war. War is the attempt to replace one archive with another. You want to rewrite the memory of the people whom you wish to dominate” while those being dominated fight to hold onto their own memories and history. Taylor applies these lessons directly to the contents of this book, which are writings culled from “the Kerouac School’s audio holdings [that] represent a community of memory centered on the twentieth-century renaissance of aural literature that was part of a larger movement that Allen Ginsberg referred to as a ‘democratization of the arts.’” The lectures and interactions recorded at the school and featured here have sought to keep alive, while re-faceting, the legacy of the Beat Generation.

If it were simply the question of making a place for the Beats in a literary canon and proving their literary mastery, that is, of carrying on something like the Shakespearean Bardolatry found in some precincts of England, there would be little here to interest the non-academic. But, as is repeatedly illustrated, the Beats (past and present) represented a nascent, pluralized bid for American cultural revolution, as did, I can’t help but mention, Grove Press, in its heyday. In other words, the Beats stood for an open society, whether this took the explicit form of fighting against sexism (as DiPrima did in her Revolutionary Letters), against racism (as Jones/Baraka did in Dutchman), against homophobia (as Ginsberg did in varied works) and against environmental degradation (as Snyder did in “Smoky the Bear Sutra”) or if it took the implicit route in Kerouac, Corso or Kaufman, whose writing, among other things, endorsed camaraderie, creativity, jazz and spontaneous behavior (along with prose) as a counterforce to the mainstream culture’s pledge to make everyone conform, revel in materialism and live without souls.

The Beats drove forward the cultural revolution in two ways. The first was to describe and uphold progressive values in prose and poetry, the second was to live them. The later trait is captured with force and verve in a number of the recollections in this collection, such as those of DiPrima, Whalen and Baraka. DiPrima speaks of creativity on the fly, of the times’ DIY (do-it-yourself) spirit. “A lot of this is hit-and-run. You rent a storefront for four months till you’ve shown your work and [that of] of all the people you really care about. … Then disappear. Forget about the rest of the lease. You know, it’s not forever.” The same goes for theater, she says. “We used to do a theater season that ran for three or four months. … We do from February to May and then the rest of the year we’d be recuperating and raising money for next season.” Baraka talks about the Beats’ arrogance, a righteous arrogance in the face of all the conformist pap and claptrap they lashed out against. “I’m in the generation,” he says, “that wants to pull all the great literature together and beat these thugs down into the ground.”

A moment ago I mentioned re-faceting. This, too, is vital. Not only has the Kerouac School sought to keep alive a strand of dissident creativity, but its members have relentlessly and coolly (though with affection and humor) critiqued weaknesses and shortcomings of the earlier generation. This is brought out in the book by, for example, the panel of Hettie Jones, Joanne Kyger, Janine Pommy Vega, and Anne Waldman, which discusses “Women and the Beats.” Here some of the sexism of the Beats is highlighted as well as the degree of liberation the Beat environment offered women. As Hettie Jones says trenchantly about the wider society in the 1950s, “Independence was never presented as an option [for a woman]. Every aspect of popular culture suggested that a self-determined woman’s life was miserable.”

Indeed, while the 1950s generation’s task was to lay out a countercultural alternative to the establishment’s constricted version of daily life, many of the writers in this book (some of whom were part of that generation), not only continue battling such repressions, but have also taken up another, most-pressing responsibility: an open-eyed examination of the failures of the 1950s -’70s cultural progressives to unseat the power that they shook but did not ultimately reverse, a power that has now brought us the neo-liberal nightmare.

I’ve already written on this theme in this publication, in Big Bridge, and elsewhere where I’ve talked, for one, of how Joanne Kyger (in Not Veracruz) ties her Buddhism into gardening in a way that gives deeper dimensions to her activism, creating a more environmentally sound spirituality than could be found previously. In Evergreen Review, I’ve looked at how Sanders (in Revs of the Morrow and America) lays out a left history of the U.S., which he offers to a new generation of cultural activists, who he hopes will be more attuned to our progressive past than were many in the previous counterculture. And I’ve indicated that Waldman in Iovis has set forth the idea of (to put it in highly abbreviated form): Stop, look three ways! In other ways, she advises that in everything you do, consider both your forebears and the next generation. In the two volumes, where Waldman upholds this method of cogitation, she shows that this perspective is fraught with both manifold difficulties and solid rewards as it creates a thick yet delicate mindfulness. As with Sanders, she implicitly recommends this more historical worldview as an elaboration that goes beyond, while incorporating earlier countercultural stances.

In Beats at Naropa, except in the case of remarks by Sanders, these larger reassessments are not discussed, but there are more specific, equally trenchant criticisms pointed at earlier Beat lapses. Besides the panel already mentioned, there is a power-packed examination of the life of Bob Kaufman presented by David Henderson, which not only makes clear the quality and significance of this poet, but gives a frightening picture of how he was torn apart by the establishment even while he was often disregarded by his Beat compeers.

To summarize, this hard-biting book gives an idea of what living history looks like. This is to say, as already noted, the continued promulgation of the rebellious, lively currents of the tradition along with, a moving beyond it in places where its vision was too narrow or blocked. Moreover, to view this somewhat grandiosely in conclusion, it means to take up what the Portuguese thinker Boaventura de Sousa Santos identifies (in Another Knowledge Is Possible) as the essential task for present-day progressives. This is to link varied left visions from disparate cultures, so they can mesh, without any one subordinating another. An idea of this is put humorously in the book by Chicana poet Lorna Dee Cervantes, who explains about her growing up, “When I first discovered the poetry of Allen Ginsberg, my first thought was ‘at last, here is Chicano poetry.’” She doesn’t mean that Ginsberg directly descends from the Hispanic radical poetry tradition, but that she can see he lifts a torch which can join those of Lorca, Neruda and her own in being thrown on a positive future’s illuminating bonfire.