Review: Conjuctions 53, Not Even Past 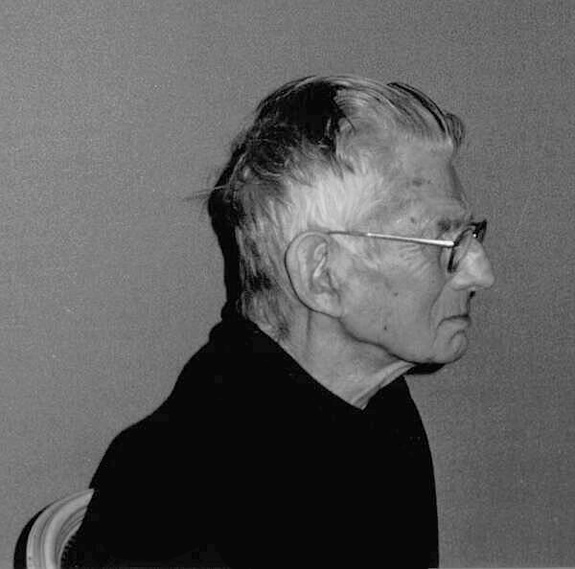 Samuel Becket, December 1988, in his nursing home in Paris. Photos by Barney Rosset, previously unpublished. One of the last, if not the last, set of images taken of Beckett before his death in 1989.

The television set below was a gift from Rosset to Beckett; Mr. Beckett's reaction to the offering is discussed in the review below. 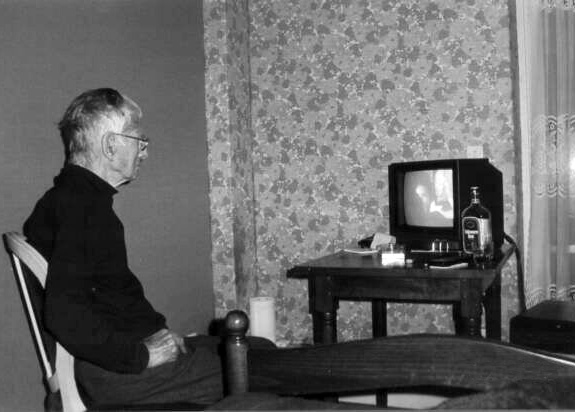 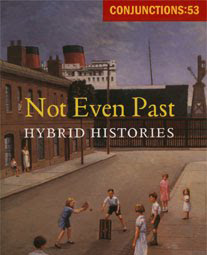 Idon’t know what the living writers in the current Conjunctions 53 (Hybrid Histories)think about being included in this issue, perhaps they feel it’s an honor. I can’t help thinking, though, that it must be a bit unsettling for them to find their work in the same volume as such giants of the pen as Roberto Bolaño, Thomas Bernhard, and Samuel Beckett/Barney Rosset. No matter how good these contemporaries are – and some are quite good – their work has difficulty measuring up against that of these titans.

First, a word about these more celebrated names. The journal opens with a piece by Barney Rosset, founding publisher of Grove Press and of the online journal where this review appears. It details Rosset’s long, close, yet almost wayward relationship to Samuel Beckett, whose works he brought to public notice, as he did those of a whole pantheon of modern writers, like Genet, Pinter, Miller, and Duras, who defined our age.

I say their friendship was “wayward” because Beckett could be what one calls “difficult.” For instance, when the Nobel Prize-winning author was confined to a nursing home, one with few amenities, Rosset thought to lug over a VCR and TV so the author could view a tape of the San Quentin prisoners’ production of Godot. Then, after the pair had watched the play, Rosset meant to leave the TV for Beckett. In this words, “As I left, I casually asked Beckett if he would store the set for future viewings. ‘Oh, no, no, no,’ Sam answered, ‘I have no use for it.’ And the subject was closed.”

In passages like this, Rosset provides insight into the way the Irishman turned his personal peccadilloes into art. Let me illustrate. When Beckett, ensconced in the nursing home, needed some papers from his apartment, which was a few blocks away, Rosset suggests they walk over and get them. “First roadblock: There was too much traffic on his boulevard; it made him dizzy. Well, let’s go in a car, I said, pressing on. Beckett replied that he didn’t have a car. Not to worry, I said, I’ll get the car. Let’s drive there. I was greeted with stony silence, and that was the end of that.” I imagine Beckett’s attitude was frustrating to Rosset, but such a mindset, which could become obsessed with probable obstacles to an endeavor, provided many a wildly comic turn when it is practiced, say, by the characters in How It Is.

Such insights into Beckett’s writing as this, which flow naturally from Rosset’s description of his companionship with the Irish writer, can be paired in this memoir with Rosset’s own perceptive comments on Beckett’s sources. Rosset surmises, for instance, that the isolation Beckett felt when living with his wife in a secluded French farm house where they, as members of the Resistance, were hiding from the Nazis, is the kernel of experience at the heart of Godot. As Rosset explains, “Beckett and Suzanne [his wife] were mostly alone, and I get the feeling of their being bored with each other, and not knowing how to pass the time, and wondering what they were doing there and when the hell they were going to get out … The heart of Godot must be inextricably intertwined with all of this.”

Turning more briefly to Bernhard, we find him represented here by an early poem “Ave Virgil.” The work reminds me immediately of Artaud, that is, Artaud the theorist, not the stylist. In The Theater and Its Double, Artaud says that writers at their best should channel myths and speak for races, classes, large groups, not as individuals. This is the task undertaken by Bernhard in this poem, where he is found mugging and masking through multiple Christian, mythic and pagan scenarios in a fury of anger, self hatred, and revulsion, all tipped with a magical, inverted lyricism. “What kind of snowflakes are they without eyes, // what kind of surrenders are they, // what kind of words are they that don’t comfort, // what kind of a cold is this,” Bernhard says, flailing nature, language and human emotion as all equally inadequate. He speaks of exile with wrenching sadness. “Going forth, worthless, moving on, // you turn away from their // funerals …. // that exhaustion without feeling, // the long evenings in the grist mill // of accusation.” The poem is a disconnected, wildly various work, but one of almost insane virtuosity of mixed, gloomy and flashy words.
Rather than going on about these greats – I’ve left out Bolaño – let’s turn to the many creditable, but less celebrated authors in the journal, who offer some forceful portraits of dreary cities, a few comic gems, and some powerfully imagined historical recreations.

For reasons of space, I can only mention one or two of each. As to troubled cityscapes, see Elizabeth Rollins’ consummately crafted “The First Intifada, Jerusalem, 1987-1993.” She tells the brief tale of an Arab boy who steps out of his neighborhood for the first time, finding another part of the city, which is filled with more luxury than he has ever dreamed but also more danger of arrest and death.

As to comic gems, look at Paul La Farge’s “The History of The History of Death,” which is about an ancient MS that is so deadly that even mentioning it in print brings on one’s demise. The story is wittily told and comes to the startling conclusion, “He [a scholar] proposed that The History of Death partakes of a fatality that is diffusely present in all books and documents, a will to eliminate the reader, by violent means if necessary.”
As to historical recreations, let me mention two. One is “Break On Through to the Other Side” by Bernard Pomerance, an author known for his theater hit The Elephant Man. It describes the meeting of two U.S. generals, Crook and Miles, who carried out actions to battle and police the West’s Native Americans after the Civil War. The confrontation of these men, never possible in reality, takes place in the afterlife, which turns out, much to their chagrin, to be the one that had been envisioned in the Native American not the Christian faith. A second riveting historical piece is Gabriel Blackwell’s “The Little Death,” which recounts the real life murder case (of two pornographers), which was behind the plot of Chandler’s first novel, The Big Sleep. Chandler knew the two men killed, indeed, as Blackwell argues, the fledging crime writer probably stole x-rated negatives from one of them. It’s a fascinating, seamy tale, which Blackwell milks for a good deal of insight.

Overall, then, Conjunctions 53 is a good place for anyone to begin who wants to make a survey of modern fiction and poetry in that it acknowledges both the irrepressible freshness of older authors such as Bernhard and Beckett/Rosset, and the continuing attempts of younger writers to carry on the prodding, uncovering and illuminating practices of their forebears.