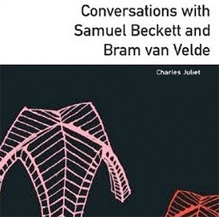 If one picked up Charles Juliet’s new memoir, Conversations with Samuel Beckett and Bram van Velde, expecting to learn many details about the themes or autobiographies of the two preeminent artists Juliet has known, one would come away sorely disappointed. Juliet has no time for that, but not because he is careless Just the opposite. He is after something more difficult to capture, more spectral, something, I would say, more essential. Juliet is trying to isolate the central philosophical kernel that drives each man in his life and creative productions.

The book is mostly about van Velde – 140 pages on the Dutch painter versus 30 on the Irish writer – and yet, paradoxically enough, one almost learns more about the writer in that one of van Velde’s main topic of conversation is Beckett, who had been one of his few friends during his Paris years.

In the Conjunctions review, elsewhere in this issue of Evergreen Review, I spoke of a curious incident in which Barney Rosset brought a TV and VCR to Beckett, who at the time was living a niggardly, confined existence in a nursing home. Hoping to make a present of the equipment, Rosset found his offer spurned by Beckett, who appeared to thrive on a life of minimal comfort. In that other review, I simply noted that Beckett was what is known as a difficult person. But, reading Juliet, one sees there’s more to it. As Juliet describes van Velde in terms that could also apply in many ways to Beckett:

Bram works in a garage where the conditions are far from ideal. Moreover, he can only work there in summer. The rest of the year, he paints in a tiny room where, of course, he lacks space. And light. A few months ago his companion told me that he refuses to have a studio worthy of the name so as to remain faithful to his past life, to the destitution he has known.

Note well. As Juliet explains, this chosen austerity has nothing to do with a Stoic outlook or a melancholy temperament, but to a recognition of the sources of his own creativity.
Both men had been artistically blocked for years. Of Beckett, for instance, Juliet has this to say about his early years in Paris:

He gave up a very promising university career, but not because he was thinking of becoming a writer. He lived in a small hotel room near Monteparnasse; he felt lost, crushed, without will. He would rise at noon; he barely had enough strength to make it to the nearest café for breakfast. He could do nothing, not even read.

By age 40, Beckett had written nothing of consequence. From this unpropitious start, he suddenly, from 1946 to 1950, poured out Molloy, Malone Dies, Waiting for Godot, The Unamable and Texts for Nothing.

Van Velde, too, went through fallow times, not being able to paint a brushstroke during the worst years of WWII, and undergoing penury and imprisonment.

Let us say that though both men were humble to the point of being self-effacing, they had a knowledge of the great art they had produced. Further, let’s say they understood, as Juliet shows nicely, that they didn’t see their creative work as some type of triumph over adversity. Actually, they saw it as the finding of a means to transform their feelings of misery and situations of impoverishment into lit up channels of art. 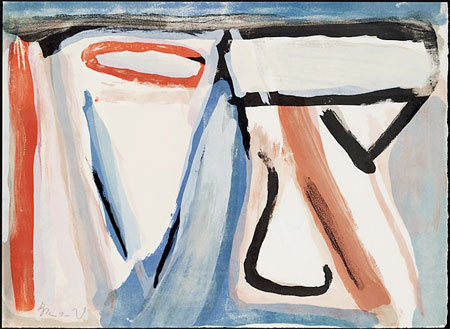 Juliet is very good at conveying how van Velde’s paintings express the Dutchman’s sense of reality. First, he explores the roots of van Velde’s vision in this passage. “To renounce knowledge, culture, and will. To renounce resistance and self affirmation. To experience some fifty years of crushing poverty and the drama of absolute solitude. To suffer humiliation. To meet during that interminable period with nothing but indifference, incomprehension, even sarcasm.” Then Juliet shows how he gets this experience on the wall:

Bram van Velde has recorded, on his canvases, the nature of his fate, the warp and weft of his life, of all our lives, by which I mean the ontological frustration, the unassuageable thirst, the radical state of deprivation – the blocked, the precarious, the inert, the enervated, the vicious, the trembling, the dismayed, the naked, the infirm, the vacillating, the dispossessed, the exiled, the inconsolable ….

So, to reinterpret the refusal scene, when Beckett turned down the chance to have a TV, it now appears to indicate a particular kind of fidelity, an acknowledgement that the wellspring of his literary voice was found in having lived a spare, barebones existence, which he would, in a way, be betraying if he lived any other way.

For Juliet to have penetrated this profoundly into the soul forms of these two giants suggests that he possesses similar brands of patience, refusal to be distracted and unflinching honesty as were to be found in his two mentors.