Review: If the Delta Was the Sea 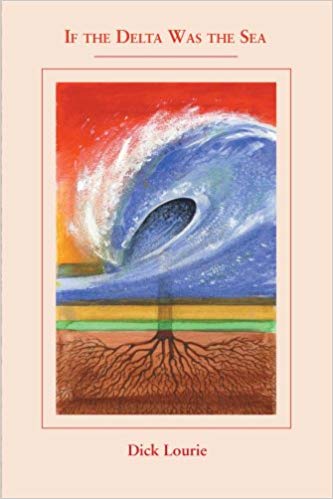 If the Delta Was the Sea
By Dick Lourie
(Brooklyn: Hanging Loose Press, 2011)

I
n his new book, If the Delta Was the Sea, Dick Lourie is not so much odd man as odd sax out.

What do I mean? He is a middle-class, New England Jew, who about 13 years ago began going twice a year to Clarksdale, Mississippi, to play his horn in the town’s blues festivals. Now, he has decided to repay the love and immediate acceptance he found in the small community by writing a long poetic sequence, celebrating Clarksdale via an unearthing of its history and praxis.

To be clearer, by “odd sax” I’m not talking about race – there are many whites on the blues bandstand – but roots. As to the white players, Lourie mentions “Fabrizio Poggi Italian master // of the blues harp.” But Poggi comes from generations of Italians who came to the Delta – recall the Italians central to Tennessee Williams’ play Orphesus Descending (Williams lived in Clarksdale, by the way) – and suffered the same poverty as the blacks. As Lourie explains, they settled “as sharecroppers and // tenant farmers on cotton plantations … [where] they soon found themselves in // deep peonage … low rates of wages, lack // of drinkable water … ill treatment by // and dishonesty of the bosses.” No wonder Poggi, born from these impoverished forbears, has got the blues.

But where did Lourie, previously a denizen of New Jersey, the Lower East Side and the Boston area, get his blues soul? (And having heard him play, I can testify that he is no piker. He displays a full, rich sound on his sax as he masterly navigates his way around the blues changes.)

Before exploring this further, let me detour through reminiscence. I grew up in Chicago where, during the 1960s and ’70s, blues was our meat and drink. Frequent trips to the Checkerboard Lounge and other South Side clubs (often with Kevin Riordan, another Evergreen Review writer), let me hear this music at its finest. So, I had something of a handle on the sound’s expressive power long before I knew anything of its background. It was only when I came across (then-named) Leroi Jones’ Blues People (published by Grove in 1963) that I gained insight into the history. Jones’ theme was how the music rose from the plantations and Southern black culture.

Now, without in any way disputing this foundation, Lourie complements Jones’s story by looking at how, after Reconstruction, the Deep South was something more than just white planters and black peons. There were always also poor immigrants, and not just the Italians mentioned, and not only, as you might think Lourie wants to document in relation to his own heritage, numerous Jews, but moreover, substantial communities of such groups as Arabs and Chinese. So, in a way, Lourie is validating his own presence as a inspired player in the community by showing how multinational this corner of the Delta really is.

In the first half of the book, Lourie tells the strange, surprising, twisting tale of how these disparate, intertwined groups survived and prospered in the town. He explains, in the Chinese section, for example, how many Orientals were born and grew up in the area, even going to whites’ only schools: “‘yellow, after all,’ as one account // put its ‘was a color’ but it was not // black so for this [reason] … the Delta // towns gradually let Chinese children // into the white schools.” The Chinese were sort of caught-in-the-middlemen, “as one [Chinese] man recalls … ‘we had to // become adept at balancing between // black and white. We were … allowed into both // worlds, but we mainly stayed to ourselves.”

They became close to the Jews, who also stood in this middle position. Lin “Pap” Pang, patriarch of the community, even heard a lot of jokes from the Jewish store owners, such as the one he retells about the white boy who wanted to buy a pair of BVDs from a Jewish merchant, but wouldn’t purchase them unless he knew what the initials stood for. The Jewish store owner, thinking quickly, said, “I’ll tell // you what it means then you’ll be satisfied: // It means Button Vay Down.”

Of course, Pap knew many Jews because the Hebrew community was both large and of long-standing in Clarksdale. How old? “In 1911, here in Clarksdale // Mississippi a group of local // Jewish men … went down to the railroad station where // a train had brought their new Torah sacred // scrolls and in procession they carried it // to this first temple.”

However, I hasten to add that, contrary to the impression I have been giving thus far, Lourie is not a proponent of some kind of “we are all family” sentimentality that would sweep under the carpet any ugliness found in any of these communities. He shows these ethnic groups, too, were torn apart by the racial strife of the 1960s. For instance, to refer to the group we have just been discussing, Lourie speaks of one rabbi whose memory of being a “refugee from // prewar Vienna … stays with him as he angrily defends // his decision not to endanger his // congregation by speaking out against // the white power structure in such times when -- // as Jews well knew – they could become easy // targets.”

In discussing the civil rights era, in the book’s second half, there is a sudden intersection in which Lourie simultaneously engages his personal biography, since in those days he applauded the fight for equality from afar (safely perched on his chair in a Lower East Side café), with that of two major figures in the town, one white and one black, who were instrumental in winning equality in that titanic battle.

This is no lyrical effusion, but a carefully researched, thoughtful, unvarnished portrait of a town, which, as it turns out, played a seminal role in American life. To characterize the verse itself, which, truth to tell, can wax lyric when the occasion demands, I must say that, by and large, it is a sober instrument, factual, meticulous in word choice and judgment, and filled with unrelenting clarity. It is fueled throughout with a passionate commitment to both social justice and to understanding the fluctuations of time and human life.

Finally, to say something of the design of this powerful, telling volume. It is built so that portraits of outstanding men and women are preceded by a full-length depiction of the community as a whole. This suggests Lourie believes community makes the person. You can’t grasp the tenor of an individual wave unless you connect it to the sea, just as you can’t grasp the fullness of one of the lilting notes Lourie belts out on his sax unless you see it as part of his lifework, a blues for history.