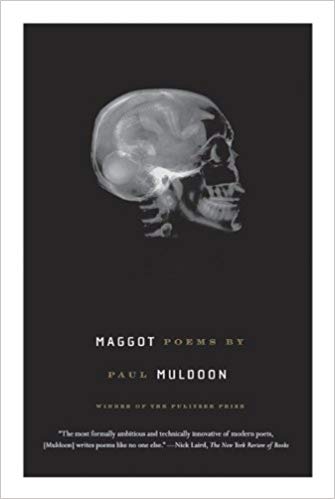 Hard to imagine that surrealist poetry, which began its life (with Eluard, Breton, and the Communist Aragon) calling for the subversion of bourgeois morality and the denunciation of consumerism and exploitation, could morph into a neo-conservative, status quo-supporting way of writing. Only in America. This was the “revolution” affected by Ashberry and his school, which is not to discount the fact that much thoughtful, valuable poetry has been written under this flag, in the way, for instance that Pound and Eliot wrote innovatively from a reactionary, if not fascist posture. Still, most of the poetry of this new neoconservatism displays a doctrinaire adherence to all the shibboleths of neo-liberalism, exalting genius, individuality and other values that underlie the “ownership society.”

Within this camp, nonetheless, there are dissenters, perhaps chief among them Paul Muldoon, who in his new book Maggot, uses the techniques of the neoliberal school to nudge Americanized surrealism back toward its roots, shoving it in a more vulgar, wide open, progressive direction. (Muldoon is Irish but has been teaching in the U.S. for some years.)

In this book, Muldoon’s variegated imaginative force is made to operate within tight, self-generated constraints, which can be best seen in one of the long sequences that make up the bulk of the book. Each of these fastens on a single guiding topic, such as, in “The Humors of Hakone,” the discovery of a dead Japanese woman’s body on the roadside, which is then linked to a number of circulating motifs, in this piece these include the eating of a poisonous Japanese blowfish and sticker-photo booths. Add to this a repeated verbal expression, which in “Hakone” is found in such nuggets as “too late,” “too late to cast about for clues,” “It was far too late,” and “too late to luxuriate.”

So far, though, you might be thinking, “This is original enough, but hardly much of a departure from the work of the Ashberry school.” But what differentiates Muldoon from this school is his particular range of reference. While the American right wing of surrealism crams its poetry with allusions to elite culture and philosophy, Muldoon fills his with references to a lower class childhood (he was raised in the country where his father was a farmer), environmental degradation, war and the savagery of nation states. In his “The Side Project,” for instance, he matches tales of life in a circus-cum-freak show with references to Sherman’s gory march, both of which contain many a grisly moment: “while Sherman gathered his unruly // troops with a drumroll // usually associated with a firing squad.”

By shifting the realm of references so decidedly, Muldoon strikes one blow for old-timey, progressive surrealism. The second is that offered by his antic, frantic humor, which makes a raucous contrast to the overly solemn, as-often-as-not affected verse of the neo-conservative surrealists. To illustrate, here are a few lines from the aforementioned side show poem: “The umbrella-mouth gulper // is an eel that can take in damn nearly an entire clover field” and “at the 1846 Papal Conclave, // Pius IX had overseen the Bearded Lady being sawn in half // by the moderate and conservative factions. For it would certainly not be lost // on Pius IX that an aerialist // is no mere acrobat, given his powers // of infallibility, don’t you know?”

It is such marvelous uses of incongruity, word mastery and wit as well as his range of reference that serve Muldoon both to point surrealism back in a more generous direction and offer multiple delights, even to the reader who is not generally interested in formalist poetry.