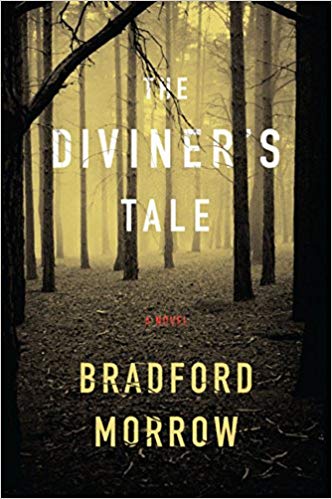 How often do you hear the following words – I imagine seldom – “This novel is a pleasure to read.”

Traditionally, that phrase has not meant the book had a plot that zipped along or full characters, but rather a book whose sentences were fluid, graceful and incisive. That last word is key, and no better exemplar of such sentences can be found than in Bradford Morrow’s new text, The Diviner’s Tale.

I take “incisive” to mean fitting, that is, the words not only read well but capture the scene and character in telling strokes. To illustrate, take this passage from Morrow in which the heroine, Cassandra Brooks, who has been summering on a Maine island, greets her father and mother who are coming for a visit. One of the many, well-marshaled tensions running through the book is that the father, Nep, has been diagnosed with Alzheimer’s and this once omni-capable man is deteriorating rapidly if unevenly. Cassandra, who hasn’t seen him for awhile is apprehensive.

Whether because of the fresh soft air or because his mind was calmed by arriving at the island, Nep looked to be having one of his good days. His eyes were quick and clear. In profile he appeared as distinguished as a sea hawk, sharp featured and worldly. His illness weathered him, but less in a diminishing than in an ennobling way.

By this passage, the reader is quite deep in the book, so this brief description of Nep comes not simply as information but as the further limning of a portrait of the father and the daughter’s way of connecting to him that is already underway.

To restate, in a book that is a “pleasure to read,” the sentences are not only well-crafted, but “add to the weave,” as it were, enriching and extending our understanding of the situational and character interplay. So, in the quoted passage, the reference to the hawk and the judgment about Nep’s aging, all work along with observations and metaphors attached to him earlier, pushing the readers’ comprehension to a new plateau and depth, if I can combine those unlikely terms.

Well, now that this review’s reader knows that The Diviner’s Tale is a joy to read, perhaps he or she would like to know what the book is about.

On the most immediate level, this is a character-driven suspense tale. Cassandra, who has taken up the family tradition of divining, searched for water in hidden pockets in upstate New York where she lives with two kids. While out dousing she has a vision of a hanged girl. At first, she takes this hallucination for real and summons the police for a (in some ways) fruitless search, though in looking for the corpse, they come upon a teenage runaway who would have died of exposure if they hadn’t located her.

The first focal point of the tale is that Cassandra’s vision makes her even more suspect in the eyes of those who inhabit the small town where she lives and where, as a single mother and all-around oddball, she is something of an outcast already. Now she has to cope with more disdain. The second central concern is that her vision and the runaway girl turn out to be linked to traumatic events in Cassandra’s youth, which were never put to rest.

The book eventually resolves the mystery and, also, with a sure social intelligence, looks at how the Brooks family: Cassandra, her two boys and her parents, cope with assaults from without (such as town gossip) and within (Nep’s illness).

Moreover, to step back a moment so as to discern a larger pattern, this book can be put in the tradition of writers, going from Fanzen’s recent Freedom back to Chute’s Merry Men, that examine the incursions of urban dwellers on the environment and culture of small town America. Within this conflict, Cassandra herself is in quite an ambiguous position in that her nearly lost art of divining, which depends on sensitive attunement to natural forces, is often employed (as in the first scene) by developers who are intent on finding water for new communities they are going to construct by paving over the pristine wilderness.

Chute describes the protests and sabotage mounted by the old-timey Maine residents as they try to forestall the developers while Franzen, who is less sympathetic to the displaced small town people, deals with those involved in the NGOs that are trying to preserve the rural landscape. Sadly if realistically, neither novelist sees the attempts to guard the small towns as successful.

Meanwhile, involved with these same themes, Morrow’s angle of approach is different. His attention is on how a family, and the community in which it is rooted, weathers the impositions that city dwellers (such as the father of Cassandra’s twin children, who seduces and abandons her) are placing on rural America. So, although Morrow’s subject matter is narrower than that of the other writers mentioned, he can (in all honesty) offer a more hopeful look that they can since, while wilderness is lost, families and communities can survive emotionally intact.

In sum, in this engrossing and powerful novel, Morrow explores how a family holds together and deepens its bonds as it negotiates what is becoming in many ways (as in how it denigrates any kind of errant spirituality such as that found in divining) a cowardly new world.