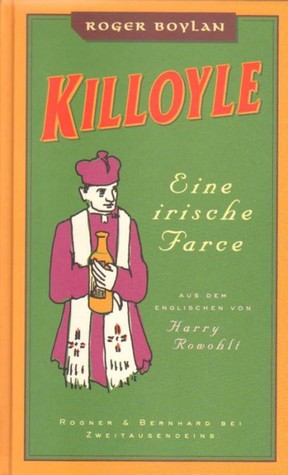 The Killoyle Trilogy
By Roger Boylan

"Nobody reads a book to get to the middle."
— Mickey Spillane

Well the Mick should know a thing or two about books, but dropping into the middle of Roger Boylan's three books about the quintessential Irish town of Killoye is a worthwhile immersion. (By the by, that town is all your granny, no such place.) Alas, it is also as far as one can easily get at present, as the third book, The Maladjusted Terrorist, has only been published in German so far (twice), although excerpts can be glimpsed on the web. The first appeared in 1997 from The Dalkey Archive, and was highly praised by the late Harvey Pekar, among others; The Great Pint Pulling Olympiad was put out in 2003 by Grove Press, but they evidently didn't see fit to take a chance on the next installment. But, of course, once Rosset was no longer at the helm, Grove quickly lost its taste for adventurous literature. It seems the bottom line is the most important text you can read, even at that once fearless publisher. Their loss and ours. To jump in anywhere though is to be caught up in a totality, a dimension between Pynchon and the Pythons, though more accessible and coherent than that implies.

A great admirer of Flann O'Brien (disclaimer: as am I myself: I have a trellis named Dermot), who has reviewed his complete works cogently, Boylan does not imitate him, or he would have convoluted his tale with the paranormal and populated his trilogy with mythic Hibernian creatures, and Killoyle, on the South coast of Ireland, is decidedly not Middle Earth, it is all too human for that. The only unearthly creatures here are "the elves of Hangover, armed with anvil and churn." Rather he seems to stand in relation to him as O'Brien does to James Joyce, turned memorably into a Jesuit-obsessed bartender in his novel The Dalkey Archive. That author in turn is memorialized in The Great Pint Pulling Olympiad with the radical splinter faction "The Soldiers of Brian O'Nolan," as ill-advised a group of rebels as you could hope for; it is his incessant humor amid hellishness that links them the most. Subsequent deaths, funerals, shellings and incarceration are all more enjoyable than the last. In each writers case, the shadow is is too vast to escape, but one can have a lot of fun in the shadows. Both writers at time transport their payloads with Blarney soaked blatherings that prove the axiom that the Irish tongue is pure revenge on the the Queen's English.

Killoyle, An Irish Farce, features Milo Rogers, Spudorgan Hall headwaiter, "something of a slum on legs," and amateur poet, with a similar gift to the unseen Jasper Hoolihan or At Swim Two Bird's character Jem Casey, whose doggerel ("A pint of plain is your only man") is simply attributed to Flann O'Brien in pub-decorating posters celebrating famous Irishmen (true, but, just…). As Joyce said with his last breath, "Did no one understand?" Boylan's heros would be right at home with Donleavy's Sebastian Dangerfield of The Ginger Man (motto: "Dignity in Debt") but these books are works for an ensemble cast.

We are treated to an epic poem at the conclusion of "Olympiad" that Rogers returns to deliver, celebrating every major character in the manner of a Celtic bard, but when the poet comes to his own place in the recitation, he is cut off summarily by the contrarian voice behind a footnote. Ah, those footnotes proliferating in unprecedented profusion! (That line would have surely provoked one, for its pomposity.) They run through the books straightening the reader out constantly lest we should get the idea that the narrator is to be believed or allowed to get away with foreshadowing, quaintness, blasphemy, or simply, impulsively, to expound on anything that pops into the anonymous footnoters head: trenchcoats, blokes named Derek, anything that reminds him of his cousin or an old girlfriend. If a bit of foreign language slips in, there is a footnote to guess helplessly at its meaning. Some are full encyclopedia entries, but to skip them is to deny yourself their perverse pleasures. There is hardly a wasted word in either case, the language is nimble, boisterous and daring. Even if the personae are crashing bores to one another, the dialect is a wonder, and we are told several times, after a few lines of someone's intense accent, that it will henceforth be rendered "in a brand of standard, if oddly tuned, English."

The books abound with startling characters, memorable even if they only appear in a few paragraphs, like Ewer Burke, who "enjoyed nothing more than seeing quivers of embarrassment and disapproval chase themselves up and down the gelatinous jowls of Dundreary's Presbyterian notables like squirrels on treetrunks". Or take Killoyle's pickled Father Doyle, rising from his bed like "Venus on the half shell, minus the beauty. His face was long and pale, with a fringe of beard and sporadic hair; his limbs were stick-thin, with with liver spots stamped here and there on the chalky pallor like mud bespattering snowdrifts; his chest varied from hollowness to concavity under the on-and-off pressures of existence and the only bad habits he dared to indulge." The danger in quoting is that it is very hard to stop. I must venture one more though, about the dangers of the third pint: "It led beyond the still habitable borderland of 'a couple of drinks' into the howling wilderness of intoxication." The first book is concerned largely with guilt, grog, gentrification, God-squadders and people whose names start with G. By the second, the local church has become a disco, and other aspects of village life have similarly gone sour.

Not since A Confederacy of Dunces has a book been this hilarious to read aloud. Many shades of Irishmen and immigrants from India are dissected, including the hapless Mick McCreek, who fails brilliantly at a succession of jobs, and Anil Swain and family, late of Mumbai, whose hyperactive involvement in the affairs of Killoyle explode events like the ubiquitous Semtex. The cauliflower ear of a plot gets pounded into a bruised mass by their attempts to seek justice, respect and decent television watching. The second book is subtitled A Mostly Irish Farce, to accommodate the international aspects of the cast.

Among contemporary Irish or irish/American writers (Boylan currently resides in Texas), the style is perhaps closest to the somewhat tamer Ian Sansom, whose The Impartial Recorder and Mobile Library mysteries give a likewise deadpan take on local culture, his set in "the North of the North of Ireland," but librarians may take a less friendly view of Boylan's work if they see what a scoundrel he has created in his Library manager, Mr. Finn. And the author could use a few friends. The third leg of his trilogy has yet to appear in English, not for want of trying. Unfortunately, this is another trait he seems to share with O'Brien. A section of Boylan's blog The Snug is devoted to the art of dealing with literary rejection, showing the excellent company he enjoys. Let's hope that some day soon, we can read the Killoyle Trilogy to get to the end.