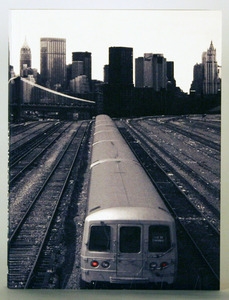 Drugs. Sex. A new Lost Generation—educated, indebted for this privilege, rendered alienated and isolated by the invasion of television in the home (“third parent TV” and “sister MTV”)—navigate Gay New York, gentrified neighborhoods, the final neighborhoods to delay gentrification, and ride the MTA.  This is the story told in Train  to  Pokipse, Rami Shamir’s recent novel.

And Shamir is a powerful storyteller. “To forget the past is to threaten yourself with freedom, and it takes a really good storyteller to make a person accept the threat,” Shamir opens, introducing a challenge which POKIPSE meets by invading readers’ minds, forcing them to consider the context of our larger current political state as symptomatic of our interpersonal interactions. Shamir asks: “What’s more important than our responsibility to those closest to us in our society. If we can treat the ones we’re meant to love the most so coldly, what can we expect to receive from that mirror image of who we are collectively, which is expressed in our leaders?”

This enthralling story is all the more memorable for the sensitivity at its core.  Shamir’s unnamed narrator is intimate with readers as he relays his experiences and wonderings as he explores his connection to his parents, the relationships formed within the undergraduate context, and the transformation of an innocent fascination with darkness into emotional alienation.

These analyses, done by a narrator who cherishes human connection, direct readers toward compassion, toward empathy.  It is this empathy that constitutes the core of Pokipsie. Therein lies the true story of his generation.

Poughkeepise.  POKIPSE. “There’s no other word like it,” Barney Rosset, in discussion with Shamir, had said about the first spelling.  The etymology can be traced to a phrase in the Mahican Indian dialect: “Uppuquiip-ising,” which has been translated to “reed covered lodge by the water place in Rinaldi and Yasinsac’s Hudson Valley Ruins.  Bound within the unnecessary letters of the word is a story of colonialism. Through the act of re-naming, Shamir re-appropriates language and calls to attention the complex relations involved in imperialism. This act demonstrates Shamir’s awareness of his novel as inhabiting a particular moment along a historical continuum. Rami’s homage to literary tradition provides a framework in which readers find grounding in historical tradition: we become aware of the continuum of history and our own perpetuation of it.

POKIPSE calls to mind Vladimir Erofeev’s Moscow to the End of the Line as a story of hope during a period of political darkness.  Shamir is not didactic, but rather encourages active citizenship through our engagements with one another.  Pokipse is exemplary of what happens when humans forego basic kindness:  “In the morning we were children, by evening we had slaughtered one another’s children.”

Shamir is stylistically innovative; he invigorates narrative traditions to tell his story in a way appropriate to New York in the 21st century.  Because of this, the novel’s connection to James Joyce goes beyond the incorporation of passages from Ulysses (Lotus Eaters).  The story’s first person narration is interrupted by letters and words as the N train speeds past graffiti. Lyrics from Yo La Tengo, Roxy Music, The Ramones, Neutral Milk Hotel, Radiohead, Jeff Buckley also interrupt (and formulate) the narration herein exhibited.  The modernist theme of city-as-character as representative of the deep influence of urban life upon its subjects manifests in many ways in Pokipse. Reminiscent of John Dos Passos’ Manhattan Transfer is the invasive presence of the MTA announcer reminding its passengers of their physical location.  The announcements become increasingly important as the narrative continues.  This story is not (could not be) told linearly.  It is temporally disorienting: the Watchtower reports the time to be 8:46 or 9:03 throughout the story.

Read Pokipse in 50 years and experience a clearly articulated representation of the aughts (or however they consent toward nomenclature) in New York.  Read Pokipse tomorrow and become deeply moved toward social and personal responsibility, toward sensitivity, to live on in this decade.

(Train To Pokipse is available at St. Mark’s Bookshop, Spoonbill and Sugartown Booksellers, and online through Underground Editions: http://undergroundeditions.bigcartel.com/. )