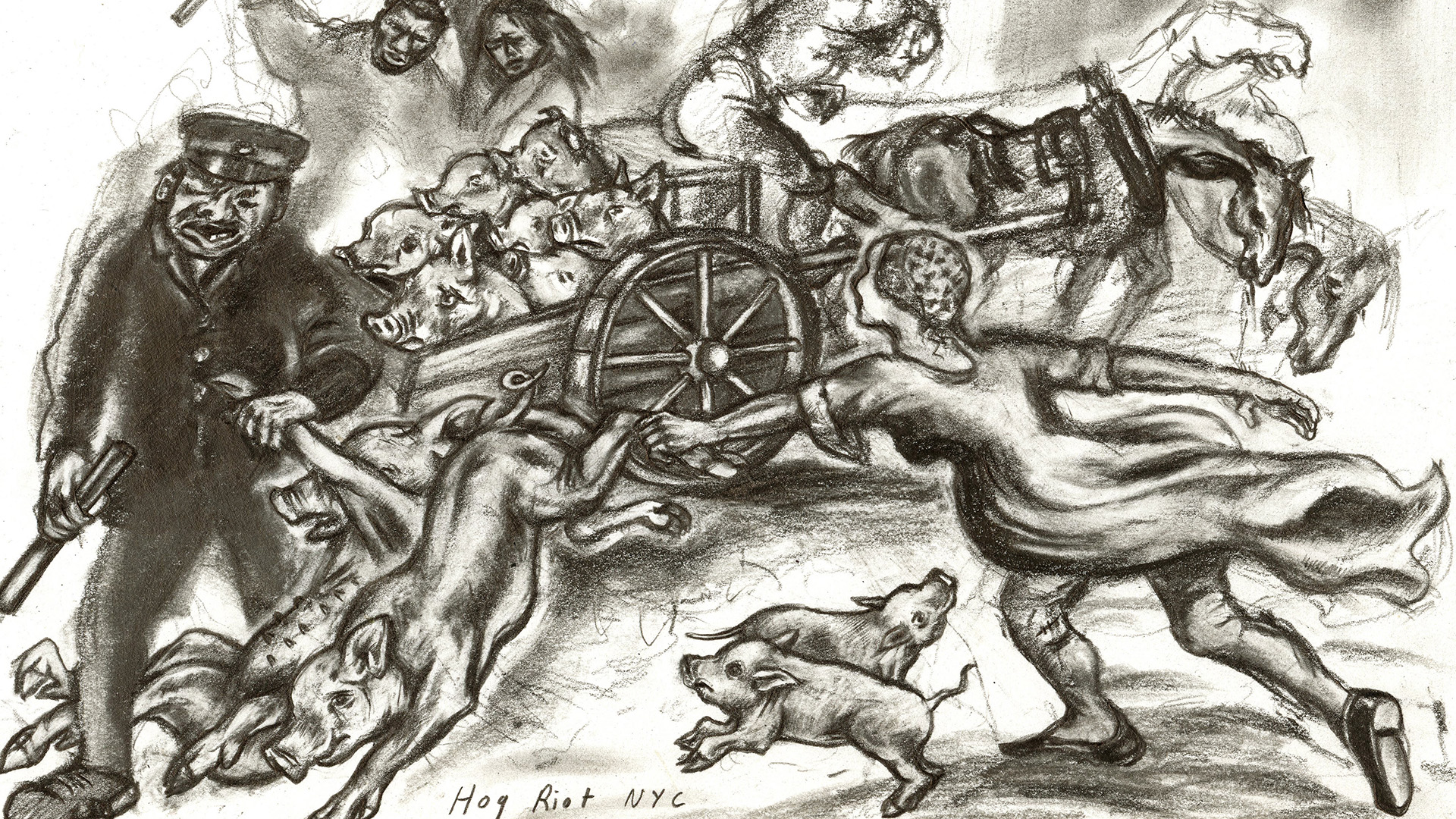 If biopower symbolically equated animals with poor men,
the workers’ reaction was not to negate the equation, but to
creatively turn it into a struggle for life.
—Nádia Farage

Pigs were an ordinary part of preindustrial cityscapes in Europe and elsewhere, where they were seen on streets and squares—but that doesn’t mean everyone was happy about it. By 1410 German cities like Ulm were already making efforts to limit the number of pigs per inhabitant and tried to reduce the time a pig was allowed to run freely around the city (one hour at midday). For a long time, these efforts weren’t successful. In Berlin, raising pigs was banned, and in 1709 the Hamburg Senate resorted to posting placards to inform the public about the odors and health problems caused by pigs cavorting unimpeded around Hamburg.

In the first half of the nineteenth century, the grunting denizens of New York became the subject of a fervent debate when gentrification and class resentments, pigs and police, affluent citizens and less affluent migrants of Irish, English, and African-American descent, and men and women clashed both verbally and physically over the issues of the free movement of pigs in public spaces and the importance of the city as a common good. This encompassed proposed legislation and street fights, letters to the editor and petitions, and disinformation campaigns and demobilization attempts.

It was a time in which migration and class relations were rearranging the urban topology of New York. The city was growing enormously, which suddenly shifted neighborhoods that were once spatially and socially far apart into immediate proximity, along with their class-specific ways of life. Even under Dutch rule in the seventeenth century, various ordinances were aimed at regulating the nuisance caused by free-roaming pigs, but for the most part they were ignored. In more troubled economic times, such as after the War of 1812, the number of pigs rose sharply, since this was a way poorer classes could easily earn extra income: pigs could not only be eaten but also sold to local butchers. Compared to other livestock, keeping pigs also required a minimum of work: in the urban environment, pigs autonomously foraged for their own food and trotted home in the evening of their own accord. These forays were eminently successful, and even important for keeping the city clean. At that time, the cleanliness of sidewalks depended on private initiative, and wasn’t considered a responsibility of municipal government. The result was that in poorer quarters, where there were almost no servants to clean up in front of the buildings, trash piled up. Pigs reduced this refuse and thus paradoxically made the less affluent zones of the city cleaner. The pigs were “the city’s shame, but nevertheless, its only efficient scavengers.”

When in the years after the War of 1812 the number of pigs in New York grew to approximately 20,000 (with a total human population of about 100,000), pressure mounted from better-situated circles to run the pigs out of Manhattan. The morals, eyes, and noses of the cultivated crowd were visibly irritated. New York had become one big “pigsty.” 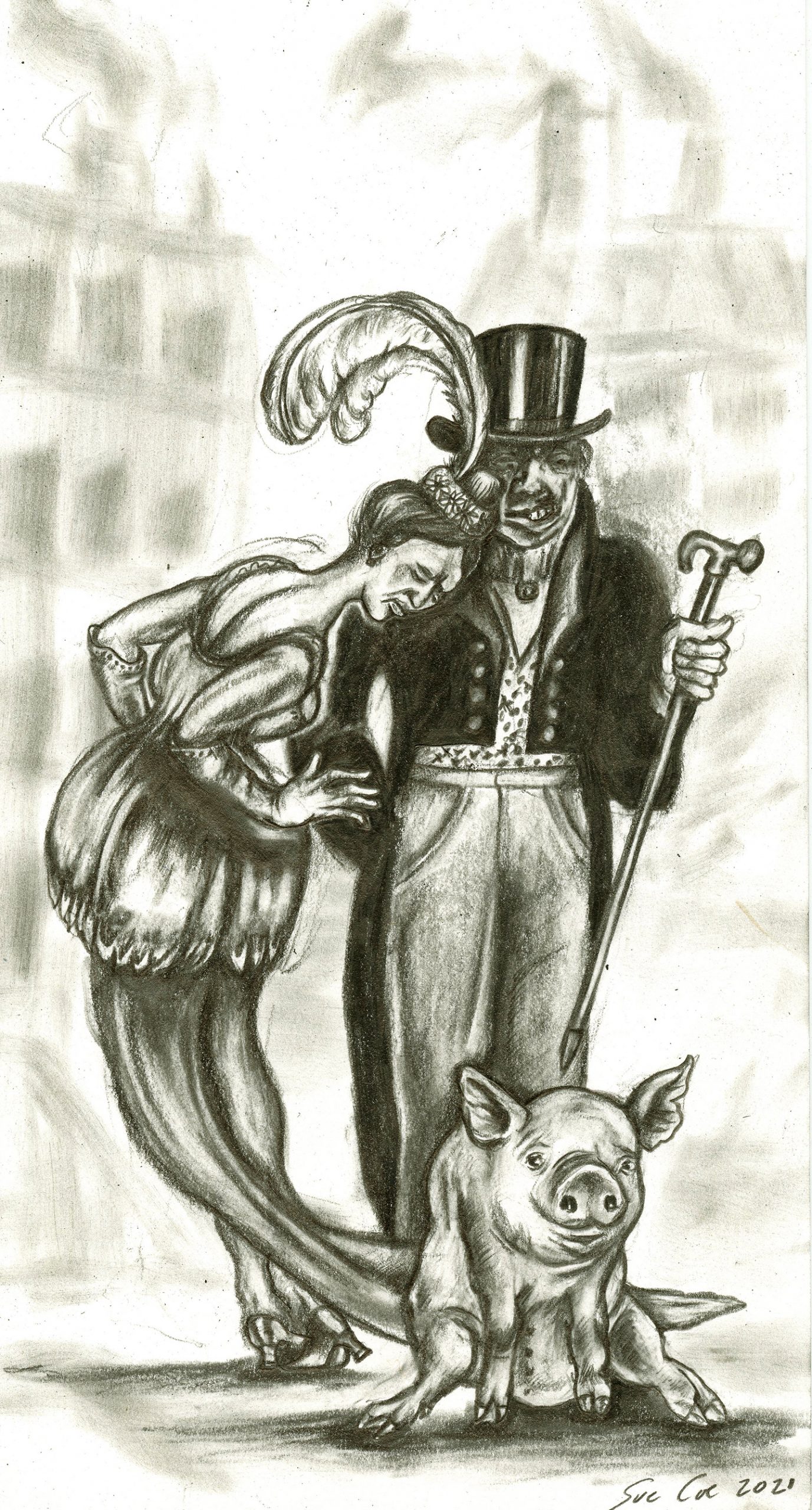 Sue Coe - Sitting on a Skirt

Abijah Hammond, one of the wealthiest landowners and merchants in the city, succeeded in 1816 in getting two hundred prosperous pig opponents to sign a petition demanding the removal of all free-running pigs. After repeated delays, the proposed ordinance was put to a vote the following year, but failed to win a majority. As news of the proposal spread, swinekeepers quickly assembled under the leadership of the African-American street sweeper Adam Marshall. Within two days, Marshall had managed to get eighty-seven people, including women and illiterate supporters, to sign a counterpetition.

With such a law, they argued, the poor would no longer have anything to eat in the winter, and the streets would be buried in filth. This mainly convinced the city councilmen from the poorer quarters, who couldn’t refute these points and were afraid of losing the confidence of their constituents. The proposed law was quashed.

This process would be repeated twice, in the form of petitions and counter-petitions, proposed laws, and revised decisions. Neither side spared the other: while the anti-pig faction made fun of a Black street sweeper leading women and illiterates, Marshall’s group retorted that informants were infiltrating their neighborhoods and stealing swine for their own use. Marshall prevailed, and the pigs went on knocking over elegant ladies and stirring up a ruckus in the streets.

In 1818, in the midst of these conflicts, a new mayor’s term had begun. This was Cadwallader D. Colden, who refused to accept the stalemate between pig opponents and pig proponents. Colden, who came from one of the oldest and most established New York families, had been appointed by the governor and therefore cared much less than the elected city councilmen about balancing the interests of various groups in the city. To realize his dream of a pig-free city, he banked on a strategy of mastering the situation by prosecuting specific individual cases.

An opportunity presented itself later that year: a butcher named Christian Harriet was accused of neglecting his duty to supervise his pigs, thereby causing a public nuisance. Harriet engaged a lawyer to defend himself. Now a proper judicial trial could be scheduled to serve as an example:

Van Wyck, the district attorney, began the case by
examining a Mr. Ames, Harriet’s neighbor and evidently
another pig keeper, who reluctantly admitted
that Harriet’s hogs had been seen in the streets. . . .
A series of horror stories was produced to show
the evil of pigs in the streets, for example: (1) hogs
attacked children, (2) boys got into trouble by riding
hogs, (3) ladies had been compelled to view swine
copulating in open view, and (4) hogs defecated on
people. The defense called no witnesses.

Under pressure from the mayor, Harriet was ultimately convicted of inciting a public nuisance. The continuing stream of complaints and letters to the editor in the following years, however, showed that this strategy of convicting individuals according to the precedent of The People v. Harriet wasn’t particularly successful as a general deterrent.

Two arguments against the free-running pigs of New York were advanced especially often. First, it was frequently objected that the sight of the pigs made an unfavorable impression on visitors to New York. This was no doubt accurate, but many visitors turned out to be more generous than expected, when in humorous deprecation they identified the pigs with all Americans and their passion for pork.

Another argument often advanced was that pigs knocked down well-dressed women and landed their clothes in the mud. From a feminist point of view, this was a questionable argument, since many of these pigs belonged to women living on their own whose very survival—not just the temporary tidiness of their garments—would be threatened by the ban on keeping swine.

It did help mobilize men who saw themselves as gallant heroes—the semi-feral domesticated pigs had become modern dragons and vanquishing them was a challenge to the knights of New York. 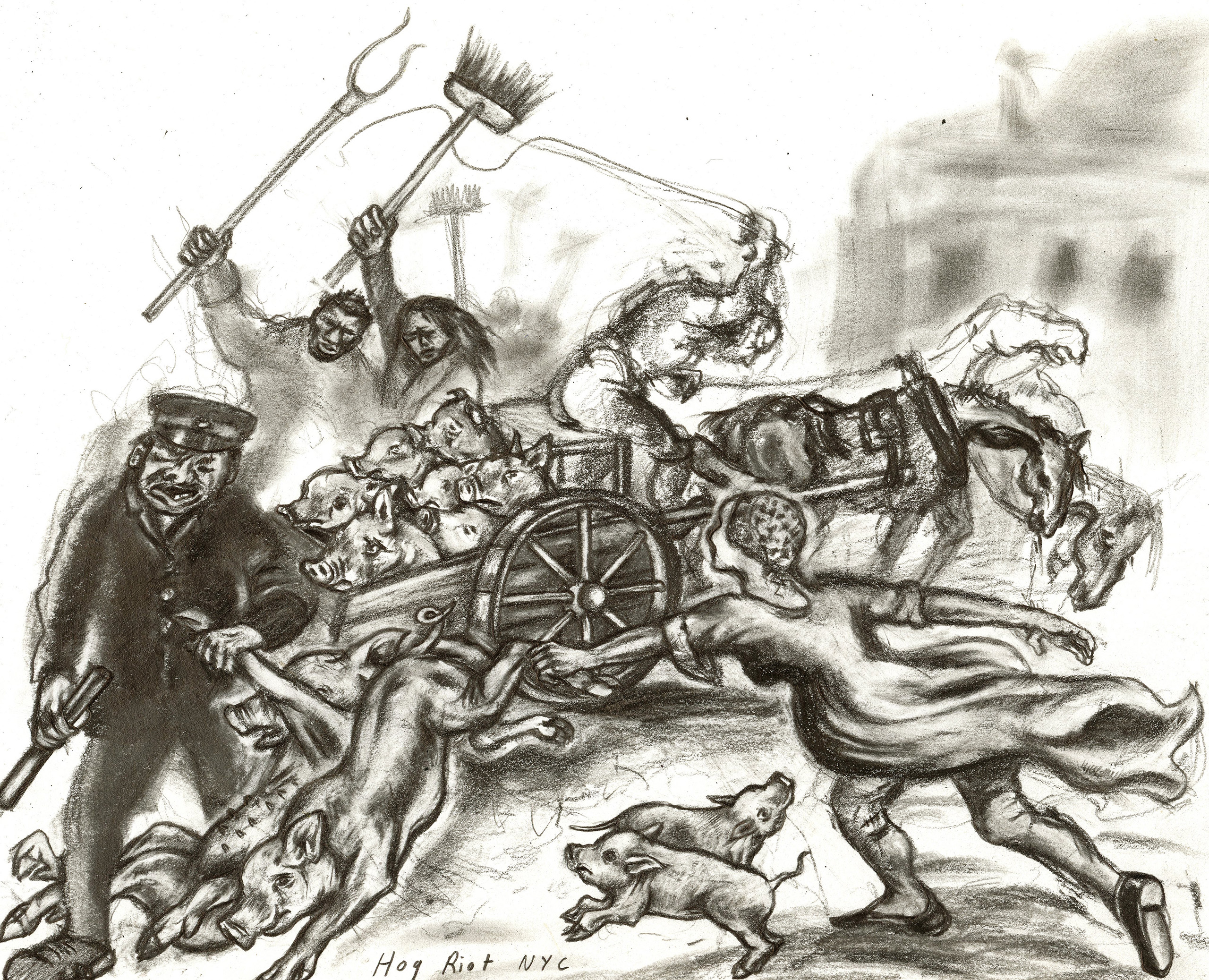 In Taming Manhattan, Catherine McNeur argues that this campaign against pigs involved class resentments from above that were directed just as much at those unruly quarters with their Irish, Black, and immigrant occupants—among them “unseemly” women. This is especially evident in the many caricatures and lampooning verses, letters, and columns in newspapers, where the pigs and their keepers, their qualities deemed interchangeable, were made into laughingstock.

In 1821, the next mayor, Stephen Allen, tried again. Allen’s strategy was to order any free-ranging pig to be captured and immediately transferred to the poorhouse, where it was to be prepared at once as food for the inmates. Allen’s ulterior motive was to quell criticism of the war against pigs, which was also a war against the needy, by feeding the pigs to the poorest of the poor. But this strategy foundered too: the hog catchers met with bitter resistance from hundreds of pig owners, their pigs, and whole neighborhoods who made a stand against the kidnapping of their animals. “Locals assaulted the hog catchers with mud, rotten food, hot water, and broomsticks. A riot had begun. The rioters were a diverse group of women and men, largely made up of working-class Irish and African-Americans.”

In response, the city council suspended the ordinance in the districts of the city where resistance was especially strong. But the “hog riots” kept happening. In 1825, 1826, 1830, and 1832, the city was rocked by numerous uprisings that usually played out according to a similar pattern: whenever a wagon was loaded with confiscated pigs, a cry went up for their release, while more and more people from the neighborhood gathered on the scene. If the demand wasn’t met, hundreds of residents would block the streets and sometimes attack the hog catchers and the police escorting them, opening the wagons and freeing the pigs, who quickly scattered in all directions.

Angry neighbors and squealing pigs put whole neighborhoods in an uproar. The fortitude of the residents against the responding officers and the flouting of the law amazed even the newspapers: “Moreover, after the 1830 riot, one newspaper complained that all of the people attacking the hogcarts, as well as those involved in another riot a few days later were immigrants who seemed not to understand the system of American law.”

Thomas F. De Voe, an eyewitness to several hog riots, reports on a typical pig melee in 1825, “where the . . . hogcatchers, and also the officers who attended them, were either cheated out of their prey, or obliged entirely to desist . . . [and] almost every woman, to a man, was joined together for common protection in resisting their favorites from becoming public property.” The complaints of wealthy New Yorkers persisted, but the pigs, their owners, and the neighborhoods that protected them had won the day and would continue to do so in the many swine rebellions over the following years.

Only an outbreak of cholera in 1832 gave the city administration and the supposedly well-meaning citizens the pretext they needed. Although the cholera had nothing to do with pigs, the cholera panic was so great that the hog catchers and their police escorts were finally successful in hunting down the hogs. Thousands of hogs were “pignapped.” The fear that the cholera would return paralyzed the city for the next two decades, while complaints about hogs marauding in the streets gradually abated, as did the number of unruly swine. It took until 1849 for the streets of the “more developed” areas of New York to be totally swine-free. What laws, the pressure of public opinion, police, and hog catchers could not achieve came about with the help of a cholera epidemic of which the pigs were totally innocent. Medical horror stories had ultimately proved to be the mightiest ideological weapon of “sanitary despotism” for demobilizing the swinish multitude. For that is how the assemblage of resistant humans and pigs were referred to over and over again on the streets and in literally hundreds of articles and letters to the editor: as a “swinish multitude.” In this expression, disobedient humans and animals were unified as a collective power of resistance.