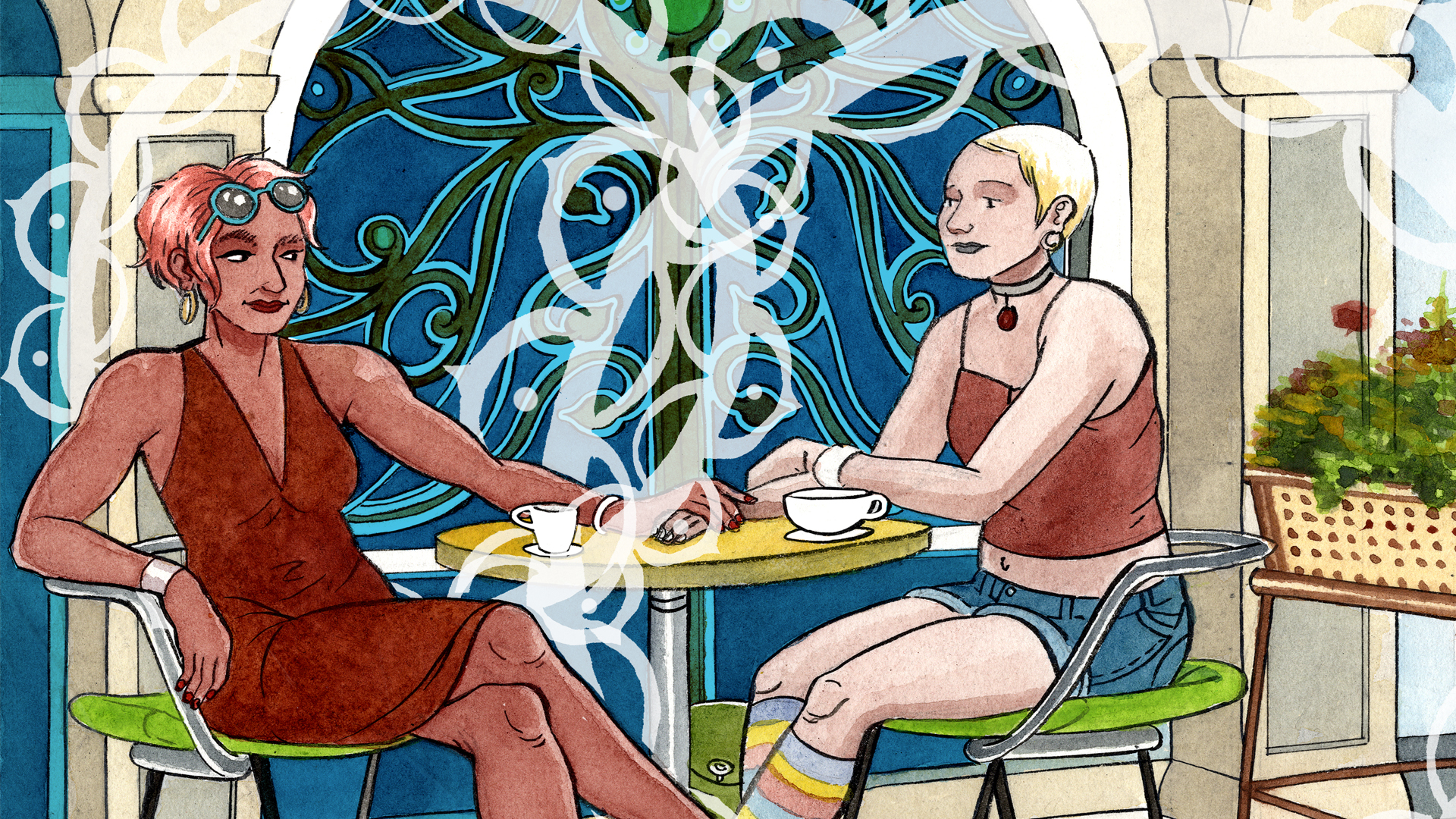 Excerpted from the verse novel The Call Out. 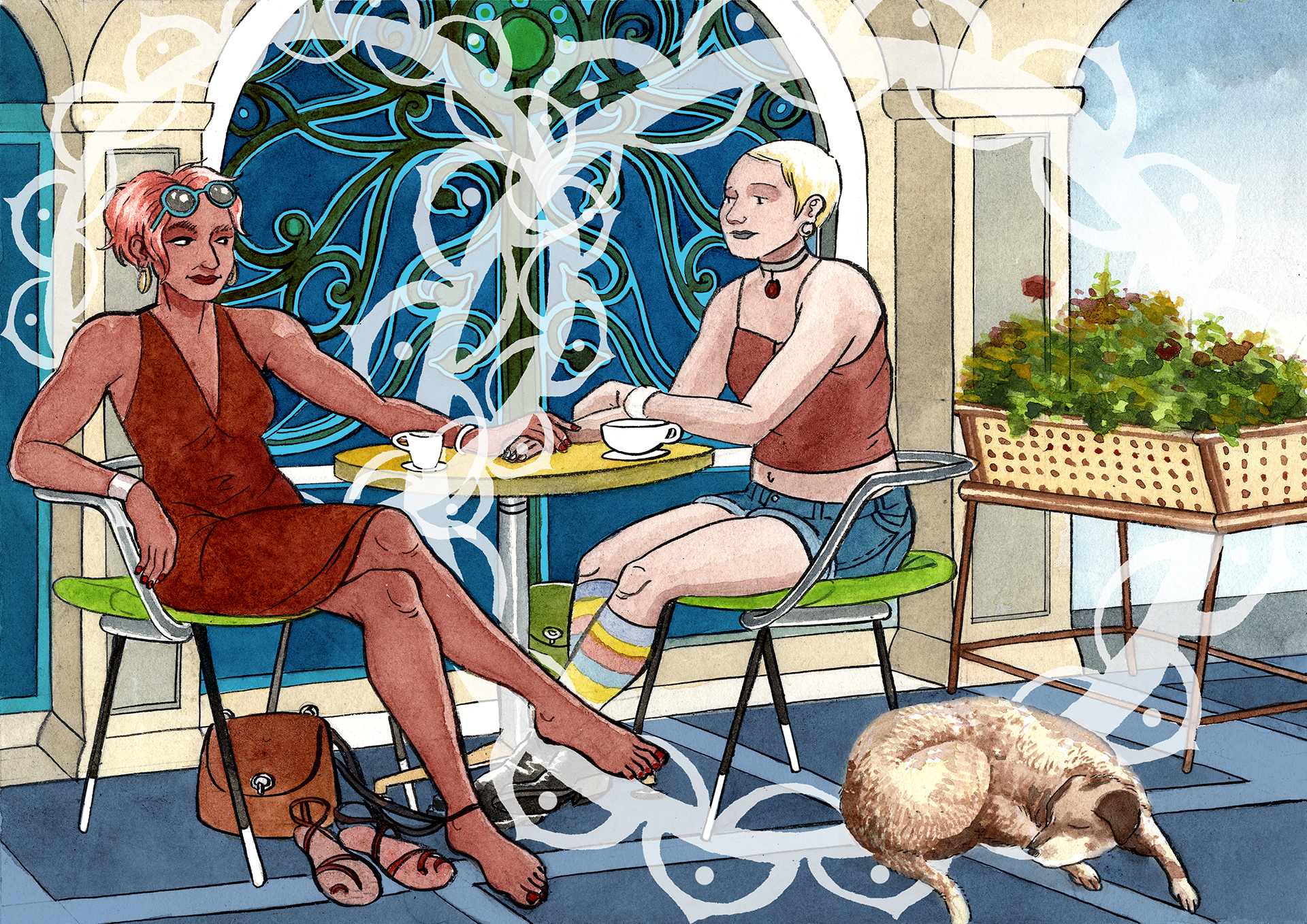 A few months later, spring is springing:
The hard dead ground has gone all soft;
Daffodils and hyacinths are flinging
The limbs of their green new bodies aloft,
Absorbing photons that induce vibration
In certain electrons in their pigmentation,
And waving their genitals in the breeze,
Bright and fragrant, to attract the bees;`
They’re not the only ones enjoying the weather
Or feeling sexy. Bette and Day
Are sitting al fresco at a hipster café,
Making out and giggling together.
From the next table, some bro-dudes stare
But neither of the girls appears to care.

They look like they know that they look fantastic.
For Bette, that’s standard. The girl has dash:
Her sunglasses are large, turquoise and plastic
And her red dress and her pink hair clash
Precisely. But Day’s been glowing up:
Sitting there cradling her coffee cup,
She’s disheveled but poised. She’s wearing this
Tank that says “Actually Cis”
Cropped at the waist, and a velvet choker;
Her shorts are shorter, and so is her hair;
She wears gray lipstick, and sports a pair
Of stripy stockings. She sips her mocha
(Bette has espresso), strokes Bette’s cheek,
And makes a small noise like she’s trying to speak.

She takes a deep breath. “OK, it’s true that
Moving in with you would save me rent
But let’s suppose I wanted to do that,
We’d need to be clear on what it meant.
You’re not the only person I’m dating,
And just this morning I was masturbating
Dressed as a baby online for some dude—
My job is strangers seeing me nude-
You know, I like to fuck and do molly—
I’m not on team ’be a dyke wife‘—
I’m not about having a stable life!
This isn’t even like ’we can be poly’
I like you, but I don’t have a ’primary,’
I just have people I’m happy to see.” 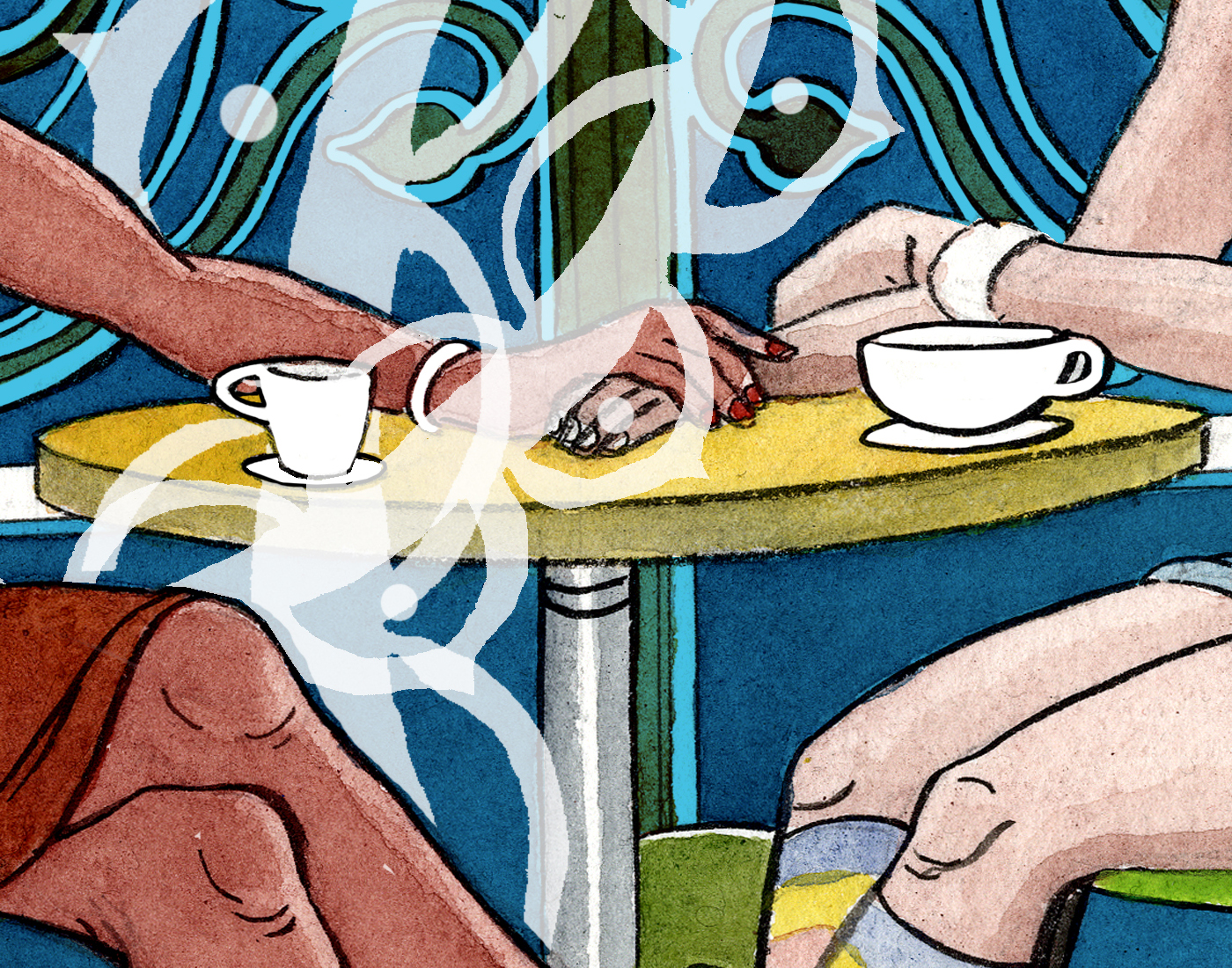 Day smiles broadly. How is she containing
Her hurt? Doesn’t this cause her pain?
“Yeah, I get that.” “I’m just explaining—“
“It’s fine— I mean, you don’t need to explain.”
Then Bette smiles too. “You mean that? Really?”
“I do. I mean, I like you. Clearly.
I just said I loved you. I’m sorry. It’s true.”
“It’s okay. I, like, I like you too,
But love as a discourse is hella oppressive.”
“I know. I get that. And that’s totally fine.
So: do you wanna move into mine?”
I promise not to be possessive.”
“But then when I’m fucking I’d be afraid
You’ll get resentful that you aren’t getting laid.”

“Right now I’m not sure I’d be attracted
To anyone who wasn’t basically your clone.”
“Oh whatever! You’re just distracted
By emotions. I blame progesterone.
Grows your titties but makes you crazy.
We’ll work on your Grindr. You can’t be lazy.
All these hotties everywhere
Won’t fuck themselves! And it’s not fair
To expect me to do all the fornication.
If I’m moving in we have to share the work.
Also you’re a top! I can’t let you shirk
What’s basically a sacred obligation.
There’s a shortage on! Don’t ration that D!”
“Okay, fine, enough, I agree!”

By now Day has started laughing,
Bette laughs as well, then they kiss,
And one of the cis guys makes a barfing
Noise. Day turns and shouts out, “Piss
The fuck back off to fucking Hoboken
Or your hetero nose is gonna get broken!”
And the dude goes silent in utter shock
So then she continues, “Eat my cock!”
And laughs wildly, like she has power.
But of course she doesn’t. And so they stand
And run away, hand in hand.
Behind them the dudes just sit and glower,
When they stop at last, Bette says, “Alright.
I’ll post my room on Facebook tonight.”

The move proceeds without complication:
One of Bette’s roommates has a friend
In some kind of hostile living situation
(Don’t they always?) and by the end
Of the month Bette has wholesale imported
Her pills, her clothes, and all her assorted
Impedimenta and knickknacks. The disarray
Seems to actually be pleasing to Day
And so Bette decides to call in the swapsie.
She pours herself a whisky, gets Day a beer
Watches her drink it, then whispers in her ear:
“Your Grindr has died. It’s time to autopsy.
I’m sorry to have to break the news.”
“Oh Bette, do I have to? Can’t I refuse?"

“I know we’re not together, precisely,
But if it’s only me having sex
With other people, doesn’t matter how nicely
We treat each other, there’ll be bad effects.
Been there before. It makes things lopsided.
Also monogamy is just misguided.”
“OK, but I’ve got a confession to make.
I don’t have a Grindr. I’m a big fake.
I have OK Cupid, but somehow I’ve never
Really used it. I start to compare
Myself with the cis girls and just despair.
I’ve only had sex with like . . . eight people ever.”
“Oh, sweetheart! Of course. I should have known!
You’re in luck. I can help. Unlock your phone.” 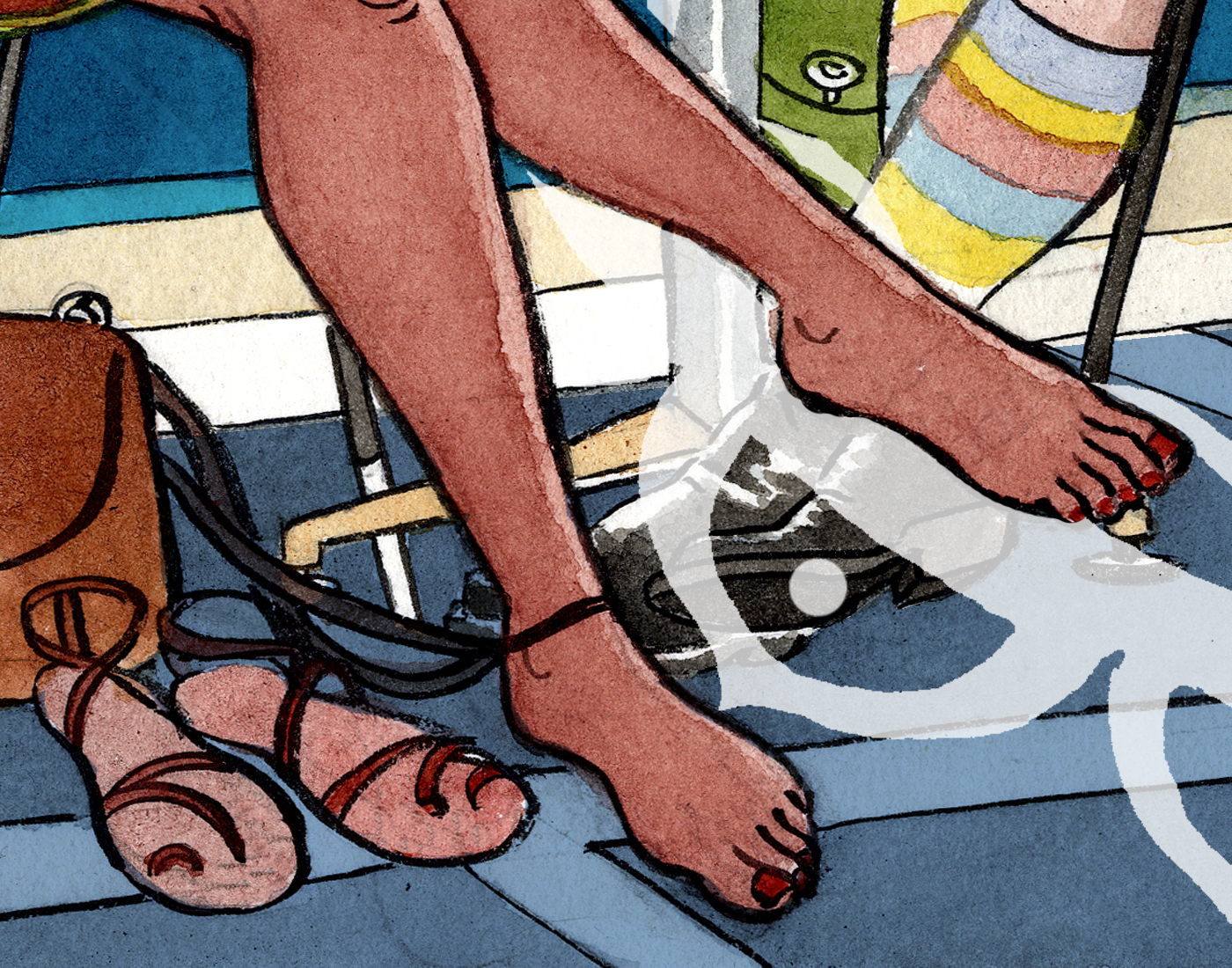 Bette downloads Grindr, sets up a profile
Fills in Day’s gender, position and race,
Opens the camera, and tells Day to smile,
Takes a picture which doesn’t include her face,
Selects “right now” as her optimal connection,
Thinks, then writes in the “about me” section:
Hung trans top, 6 inches and thicc
If you buy me pizza you can suck my dick.
With minutes Day’s messages are on fire
And her telephone is vibrating nonstop.
Bette’s not surprised: “You’re a functional top.
No strings. You’re just what they all desire.”
“I don’t think I can fuck a cisgender man”
“You’re so good at fucking. Of course you can.”

1She shows her subbyboylookin2sucU.
Day looks at his message, gives a frown, then a grin
Then types, oh so you want me to fuck you?
Bette squeals, “Yesss! Just jump right in!”
They’re both all giddy. After specifying
The pizza she’d find most gratifying
Day tells the boy he’s a dirty slut
Who needs to enema his faggot butt.
“This is fun,” she says. “It’s almost a pity
I’m not actually going to domme this guy.”
“Oh darlin’, you’re just so cute when you’re shy.
For sure you should domme him. Oh you look so pretty.”
Bette sounds like a mother, preparing to send
Her daughter to stay the night with a friend.

And so, just like a good little daughter
Day takes some condoms and heads out the door
And, to make a short story shorter
She doesn’t have them any more
By the time she returns. In their place she’s acquired
Not only the pizza she required
(Half-eaten) but also some zeppoli.
Bette’s like “Get those away from me.”
And Day’s like “Your loss. They taste fantastic.
That wasn’t at all as creepy as I‘d feared
Although I guess it was kind of weird
To have this dude be so enthusiastic
About my body. He adored my dick.”
“Bet you money,” Bette says, “he’s a chick.”

“What?” “Most dudes who want to date us
Are unhatched eggs, but with jobs or a wife
That make them too scared to imitate us
And ruin their comfortable cishet life.
But as long as you view it as a transaction
Who cares why they have a ‘trans-attraction’?”
“But I have a job.” “And now you’re out,
Does it make it harder?” “Much. No doubt.”
“So then.” “So he was only interested
Because he’s secretly a tranny too?”
“Who gives a fuck? Perhaps that’s true,
But you have to ask why you’re invested
In abstract notions of attractive or not.
You just need someone to think you’re hot.”

“He definitely did. It was almost pathetic.”
“And did you feel sexy as well?”
“I mean, that head was really energetic.
Yeah, I guess I felt sexy as hell.”
“And did you get pizza?” “Yes! It’s delicious!
And also, unlike ramen, nutritious.”
“Still not eating it. But I might enjoy
Consuming you, like you consumed that boy.”
And then . . . I’m sorry, it’s too upsetting,
I have to stop and take a breath.
I feel like I’m recounting someone’s death.
Then I read it over, and they’re only getting
Laid and laughing, and hanging out.
What am I so upset about?