I have dedicated 20 years to the struggle for preserving the Lower East Side. Not a bad contribution. After all these years, I’ve begun to feel that maybe it’s time to hang up my spurs, and stop all the hard riding I’ve been doing in the cause of people’s justice. I’m getting too old for this, I’d think. Then, like a jab in the eye, up pops another conflict. 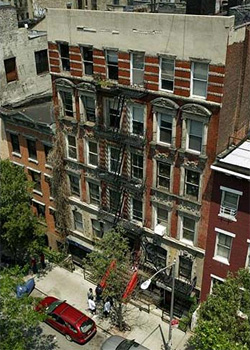 Take the unbelievable case of Alistair Economakis, wealthy heir to a Greek shipping company, and N.Y.C. real estate tycoon, who purchased 45-47 East 3rd Street. Once he bought this 6-story, rent stabilized building that had two, ground-floor store fronts, and 15 families, he moved to effect a mass eviction of everyone in the building. Some of the families lived there for decades. Young adults had grown up in that building.

But, isn’t there a law against such actions? Well, there is a rule that a new owner has the right to evict people from apartments that he or she is going to use if the owner sets up residence in the building. In the average case, the new landlord will evict people from one apartment. But Economakis, his wife and 2 infant children say they need the whole building for their own private mansion. After all he needs a floor (four apartments) for himself and his lovely wife to lounge around on, a floor for the babies, a gym, a library, a corner for the nanny, the cat needs space, and they need a bathtub big enough to swim in.

I guess it’s part of this new ideal world (for the super-rich) being engineered by people like Bloomberg, our billionaire mayor, and those of their ilk. For them, the Economakis family has every legal, moral, and ethical right to evict all the tenants. The law says that a landlord can take over a space, evict the tenants, rent stabilized or not, for his own use.

Okay, fine, a space, an apartment, but never before has a landlord been so greedy and power mad as to think of taking over a 2 address, 6-story tenement, as one space for himself. The arrogance, sense of self-importance and entitlement, which allows you the right to crush anyone without wealth beneath your boots is, to say the least, overwhelming.

And, the fact is, there is no dissent all the way up that the chain of authority, including at the highest court in the State of NY. All the authorities agree that Economakis can take the whole building for his own personal use and throw everyone onto the street. You can see that laws are flexible, a concept, a point of view, a grouping of words, and like any concept, point of view, or grouping of words, they can be moved around and interpreted in different ways.

Where the law stated that a landlord was allowed to take some of the building for his own personal use, no one, previously, thought this gave him the right to empty a 6-story building. But, now it is found that it only takes the demands of one person, as long as he is well-heeled enough to afford a creative, fast-talking, expensive lawyer (one without a conscience, of course) and the words and concepts of the law can be twisted into a new point of view.

Come to think of it, when the next overreaching billionaire comes along, he may buy a whole block and dump the residents, saying he needs every building for his family, hangers-on, servants, and pet menagerie.

But, to return to the present case, I want to note that: Yes, it may be The Law, but in my world, what Economakis is doing is morally and ethically wrong, PERIOD. Let’s lay it on the line. Economakis is breaking up families, throwing people into the street, making people homeless; as well as setting a precedent, which will light the way for others (in the millionaire’s club) to follow. Economakis has found a way to legally steal people homes, their sense of security and well-being, a way to clear out thousands.

Look at this billionaire’s sense of entitlement and his self importance, based on ME vs. anyone other than me, or, to put it more honestly, his de facto statement, “Your family can go live in a homeless shelter, for all I care, because my cat needs a place to wash her toenails.” Do you see the difference between the morals of the righteous billionaires, and those of the people in my world?

To think that Mayor Mike, and all of the other powerful in this city, by their silence, are allowing this tragedy to prevail. To think that the mother of his wife, Catherine Economakis, is a Dean of Urban Studies at Columbia University. It makes you wonder what values are being taught at this high-priced Ivy League University. But, maybe, though I don’t know this, it’s like the case I’ve written about elsewhere of William Casey. The think tank Casey founded, the Manhattan Institute, has operated with the same lying and high-and- mighty treachery that also characterized the CIA, which Casey once headed.

I wonder if the heartless twisting of the law so as to carry out dirty real estate deals that Economakis makes use of is not also found in some of the (much-deplored by Harlem residents) land grabs Columbia has made in its neighborhood.

It also makes me wonder that on the outrageousness of this destructive-to-humanity greed, we hear no comment from Sheldon Silver our local “most powerful democrat in the state” assemblyman. We do see the thumbs up from our billionaire mayor Bloomberg. Like ya right, let’s keep Bloomberg in power and give him a 3rd term because he is the only who can fix the economy- sure, his rich friends’ economy.

“No,” I say, “Kick the bums out of office,” and stop the land grabs of Economakis and his fellow filthy rich buccaneers.