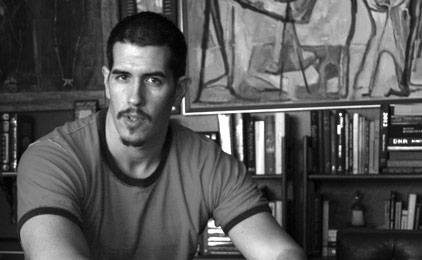 The message of divinity, meticulously, scraped from the bowels of faith
A eulogy held in honor of the self, a dirge hummed in solitary ecstasy
A lamentation lived in passionate await of truer tears to be shed
The joy of Thanatos lurking between irregular heartbeats of truth & deception
Finalities erogenous, cessation comes, knocking its revelation - its destination
Thoughts quickening into singularity; a return to the original being
anxious to explode, with love

Philoxenos uninhibited, sought out strangeness, the holy exotic of Heaven, in The Hell
Offerings made, harboring no allegiance but to knowledge, widening the portal into the uncommon self
Through rapacious ingestion of the other, by unification of discarnate desires
a ritual destruction was achieved. Enough to be reborn
And be reborn

A tract of soul was allotted for the journey, a certain amount of sacrifice prophesized,
a corpus documenting fleeting reflections transcribed
but witnesses impregnate the purity, defile the baptism, turn sour the milk of god
Can a flightless bird change the way one looks at the sky?
Is ascension, postmortem, its first taste of freedom?
Do dreams fall or rise with the setting of eyes in prayer…
or are they made real, by fingers bled, by hearts torn, by minds tormented - in acquisition of?

The Earth fails to answer, sufficiently

Tender inflections of selflessness fall mute on mountains of philistine ears
Innocence is a voice too few have means to believe still exists
Attached to authority’s rancid tit lays the populace of shame, suffocating on it's own greed
The surrogate becomes an addiction, necessity becomes of the nonessential.
The adulterated child loses sight of its innate light, and wanders off homeless
wondering where it came from……. and why it's here……. Afraid……. of everything?

A spirit defiant, a virtuous giant, to wrestle, willingly, with the
iron(ic) hand: that feeds, that binds, that strangles justice, in prescient preparation for domination
is the work… of an Angel… fallen on its knees to marry itself
To be both bold defender of genderless sentience & that of the flesh
with its jolting beauty & metaphoric perfection, riddling the most pious out of celibacy
coaxing away, with its indefinable allure, its genius, those who lust for supremacy

and who should play the role… better… but you, my friend?
With lips of sincerity serenading evil out of shade & anonymity
Reprimanding, with neutral tongue, those whose intentions are beleaguered by inhumanity

and who shall, when the bell peals on the judgment of men, be waiting with exalting reprieve
… but you?
With your sense of fairness in equal complement to your complexion's hue
With your swiftness of forgiveness as guide
uplifting the morale of Change, fatigued by oppressive revenge

And who, but you
shall I want to return to
when this body forged of confusion & regret, hopelessness & dismay, decides to lay sleep its head?
Who, when life presents me death, shall I cry out for, at first step?

beyond this immaculate representational image, before my, eternally, unerring devotion
could, possibly, inspire me to die more peacefully, more rapturously, more completely, than you?

Life is not handed down from above…
it is taken, it is devoured, it is mashed between the teeth of drive & destiny
it is unleashed upon the world, in a fit of sexuality
it is tyrannical with want, and in constant need of more
It IS search, it IS hunger, it IS fight, It IS obsession
It is the worst thing that could have happened on this planet

We are not an answer to anything!

And when the seasons shake & the cycles revolt, and when the tides start to froth at the mouth
we won't make much of a difference
Our stain of irresponsibility will find itself untraceable, washed clean, reduced to raw materials
made forever humble, by extinction

And the embryonic sun shall gorge upon oblivion, with reckless abandon
And the galaxies Andromeda & Milky Way shall swirl into one another, shatter & collide
And Expansion's nuclear furnace meltdown into an inescapable gravity
Pulling you & me closer than we've ever been before
Til oneness is no longer a far-off romantic aspiration, but an eventuality
more horrendous & exquisite than ever imagined
The infinitesimal womb of absolute energy
gestating a vibration with potential beyond calculation

And like the First Kiss, we never shared
sitting on that bench, the last day we met…