Barney Rosset changed my life. And because of his tenacity and courage, pushing against the philistines and censors, winning First Amendment rights victories in the middle of the last century, he changed the lives of countless others. What he accomplished with Grove Press and Evergreen Review broke ground for me both as a writer and editor, not to mention a reader. As with James Laughlin’s New Directions, I could always be sure that a book with the Grove Press imprint was going to be of utmost literary interest to me. My library is bejeweled with Grove books: Beckett, Burroughs, Genet, Miller, Oe, Kerouac, a pantheon of revolutionary writers. 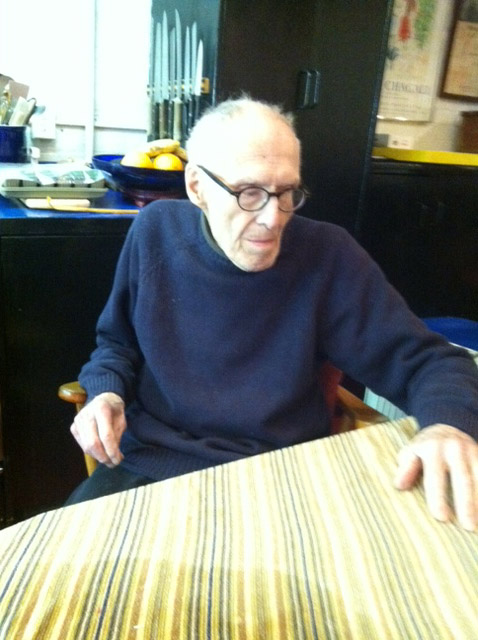 When Barney and I finally met half a dozen years ago, from our first marathon three-hour conversation forward it felt as though we’d been in dialogue for years. We both marveled at how instantly close we felt toward one another, how swiftly a deep personal affection developed. It was not at all unusual for us to hold hands while we talked in the corner booth of our favorite lunch spot and watering hole, The Knickerbocker. I loved him as a literary forefather, yes, but I also loved him in a genuinely filial, familial way.

And what did we talk about? Everything imaginable, from literary gossip to personal problems, projects we were working on together and apart. He was a natural-born storyteller and had a hundred memories of the old days, all of which he told with razor wit and charming self-deprecation. He read my novels and stories and I read his memoir manuscript.  On the occasion of the publication party for my recent collection of short stories, The Uninnocent, Barney came as my “date” and we had a good time of it.

I was privileged to publish his essays on Samuel Beckett and on his service in the second World War as an Army photographer in China, as well as one of the only short stories he ever wrote, “Tin Pan Alley Chicago Style,” set in his hometown. If Barney could be famously irascible with others, he never flashed any such barbs my way. Whereas he was capable of suspecting all sorts of people as being in the CIA—his paranoia about the government was not without reason—he was always generous and cordial with the young (and older) writers I introduced him to over the years. The respect he commanded among my friends was boundless.

One of my most cherished possessions is a copy of Evergreen Review, volume 1, number 1, which he inscribed, “For Brad, who reopened the world for me, Barney.” Well, the truth of it is you opened the world for me, Barney. The last time I saw him, on Thursday, February 16, we met to talk about his memoir, which I had agreed to help him prepare for publication.  Although neither of us knew at the time that he only had five days to live, we sat at the kitchen table in his loft on Fourth Avenue, just a few blocks from where I live, and talked about what he was most proud of having accomplished during his Grove years. (His memoir didn’t have an ending, so this interview was meant to provide a basis for an epilogue.) He cited at the top of his list were his anti-censorship and First Amendment rights battles. The authors for whom he had the most affection were Beckett and Oe. His biggest regret?  Selling Grove.

Nervous about his upcoming surgery, I found myself taking a multitude of photos of him.  Now pensive, now joking, Barney was in good form that day. When I kissed him goodbye—we always kissed hello and goodbye—and began to walk away, something told me to go back to the kitchen and give him another hug and kiss. Downstairs, outside on the avenue, I thought to myself, I sure hope that isn’t the last time I see Barney Rosset. Then I thought, no, Barney’s indestructible…all will be well. In so many ways that remains true.  Barney’s courageous energy and vision profoundly changed the culture. It’s a legacy only a handful of publishers in the 20th century share. It’s a legacy that, like Barney’s spirit, will always live. He can’t go on? He’ll go on.