Originally published in The Evergreen Review Issue 125 in December, 2010. 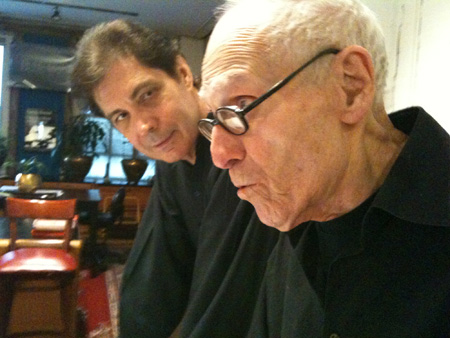 When Lives Converge:
Put together a Bangkok novelist, a legendary New York publisher, and a guy who writes military history…

It was right around the year 2000.  I had just finished a novel I was writing - Stone Gods, Wooden Elephants - set in Bangkok and other parts of Thailand. The book was not yet in print, but I was on my way to Bangkok again, and it seemed like a good time to try to meet Christopher Moore.  I had an address for his website, and sent him an email.  He actually responded:  “Let me know when you get to Bangkok.”

After settling in, I sent another email:  I was in Bangkok and eager to get together.  Christopher’s response included instructions:

“The Thermae – at midnight.”

I could find the Thermae; any reader of  Christopher’s Calvino novels could. Perhaps not the most elegant of Bangkok’s massage parlors, or the most reputable, it was a Bangkok institution. The Thermae was already there when I first visited Bangkok thirty years before. Its below street-level coffee shop was known to expats living in Bangkok, and to knowledgeable visitors.  I walked in carrying a copy of Christopher’s Asia Hand.  I was re-reading it at the time and it seemed an appropriate choice for a possible autograph opportunity.

I had not been in the Thermae in years – decades, maybe. I had forgotten how large the coffee shop was, and how at midnight it would be dark and smoky and filled with people. But Christopher would be easy to find.  I knew what he looked like: his early novels had a back-cover photo: a tough-looking Private Investigator in a 1940s film – a face under the fedora that all PIs wore then.

I grabbed a stool at the bar and surveyed the scene.  No one was wearing a hat; not a good sign. But this was the Thermae after all:  Bangkok sleuth Vincent Calvino hung out here, and his creator, Christopher G. Moore would certainly be well known.  A very friendly young lady sidled up to me. I asked if she could point out the famous novelist.  I got a long vacant stare before she walked away.

I needed a more mature-type woman, a reader of murder mysteries, perhaps?  When I thought I saw her, I gestured.  She came alongside and I showed my copy of Asia Hand as I asked about Christopher.  There was momentary confusion, and then:

She looked around and finally pointed to where two farangs sat talking.  Neither looked like a 1940s PI.  It turned out one of those guys was Christopher. Without the hat he was not so tough-looking.

We talked then, and again a few days later at the Lonestar in Washington Square. Calvino fans will recognize the Lonestar as  .  I did get my copy of Asia Hand signed, but Christopher neglected to date it, so I don’t have the exact date.

On my future trips to Bangkok it became routine to let Christopher know when I was in town and we would get together, usually at the Lonestar.  Over the years I watched Christopher’s career grow as he got known beyond Bangkok, and won awards for what he wrote.  I was writing articles for military history magazines mostly.  I had been working closely with a Thai historic aviation foundation, and through that had become involved with the famous World War II Flying Tigers. Through the Tigers I became involved with China and started spending more time there.

One day at the Lonestar, Chris told me about a friend who had been a U.S, Army photographer in China during WWII.  His photos were fabulous, had once been shown in New York, and wouldn’t it would be a neat thing to organize an exhibit in China?  His friend had expressed an interest in possibly doing that - in Kunming – the center of  U.S. activity in China during WW II, and where I had contacts.

“Yeah, well…,” I said.  I don’t think I was really taken with the idea at first.  I was preoccupied with fighter pilots and special operations folk and I wasn’t sure what I would do with some Army guy. But Christopher and I talked about it, exchanged some emails.  For a while nothing happened.  I kept the idea on my list, and while getting organized for an upcoming China trip decided to do something about it.  More emails, and I asked the Army photographer for some background and sample photos.

I don’t now recall the exact moment that I realized what I had bitten into.  Christopher had told me about his friend – he lived in New York City and had been a high-profile publisher.  He gave me a host of other details that went right by me at the time.  The man’s name was Barney Rosset.  I ran it through Google.

“The Most Dangerous Man in Publishing,” said one of the first hits, the title of a 2008 Newsweek interview. It seems Barney Rosset had been proprietor of an establishment called “Grove Press” - which Newsweek called “a force that challenged and changed literature and American culture in deep and lasting ways.”  Wow. Another hit bought up Evergreen Review, a magazine Rosset founded in 1957, where a new generation of writers “produced some of the best and most provocative writing of the time.”  Whoa….  Just what did I have here?

Actually, I knew what I had – it was just a little hard to believe. At an earlier stage of my life I devoted serious time to the study of literature, mostly Shakespeare and the modern British novel, but I also did a bit of American Lit.  I may not have recognized the name, but I sure knew who Barney Rosset was.

Poke about in mid-20th century American Literature and you quickly find where Barney Rosset’s hand shaped it.  He is best known for defending freedom of expression in landmark legal battles to publish uncensored versions of  D.H. Lawrence’s Lady Chatterley’s Lover, and Henry Miller’s Tropic of Cancer. He published some of the most significant writers of the time, including Beat Generation notables like Allen Ginsberg, Jack Kerouac and William Burroughs.  He published Malcolm X, and Che Guevara.  He introduced American readers to Samuel Beckett, to Jean Genet, Kenzaburo Oe, and many others.

I was soon on my way to China with copies of photos Rosset had taken there in 1945, as he covered the Chinese Army during a major Japanese offensive. In Kunming, I met with senior staff at the municipal museum to discuss a Rosset photo exhibit.  I was just a bit concerned about how Rosset - who had pushed the limits of censorship in America - would be received in China.  If - the Chinese figured out who he was.

The photo copies I had were not great, but it was evident the museum staff liked what they saw.  They asked who the photographer was, and I stared telling them how Rosset had been responsible for bringing into being the books of many great writers.  My interpreter had been looking at a Bio sheet I had prepared, focusing on the names of some of Rosset’s authors. The first that caught his eye was Jack Kerouac, then Malcolm X, and then he saw “Lady  Chatterley.”  He looked at me:  “These names – they are in our school curriculum.”  It turned out that Rosset’s achievements, including his fight for freedom of expression, were not unknown in China.  From there it was easy.  The museum officials quickly agreed to an exhibit of Barney Rosset’s China photos.

That this icon of the American literary scene was appreciated in China, and that his work as a combat photographer would now also be recognized, made this a gratifying experience.  In small ways, Christopher and I had helped. And the best was yet to come.  I had not yet met Rosset.  I would try to do that as soon as I got back to the U.S., after I dropped by Bangkok and brought Christopher up to speed.

Meeting Barney Rosset was quite an experience.  I found a vital and very engaged man, who – at age 88 - could run me into the ground.  It became impossible for me to see him as an old man.  His mind was quick and agile; his memory clear. He had an immense store of intellectual energy. He was working on his autobiography, and with his wife Astrid Myers Rosset, was managing an online version of Evergreen Review. He was still fighting the intellectual wars.

We met in Rosset’s New York apartment, lined with bookshelves holding binders and boxes that were the archive of his life. The walls had posters of Evergreen covers and photographs of the Beats, of Che Guevara, of  Samuel Beckett.  I had come to talk about Rosset’s experiences in China and the photographs he took there, but I was not at all disappointed when our conversation turned to Rosset’s adventures with Grove Press. A lot had happened right around us:  “Mishima was sitting in the chair you’re in when he said that.”

We walked Greenwich Village streets where Rosset pointed out landmarks, places where Allen Ginsberg and Timothy Leary visited; where Grove Press had been located when anti-Castro Cubans lobbed a grenade through the window; where the literary watering holes were and where Rosset set up his own bar. Over dinner, he told me about Kerouac, and Ginsberg and and Samuel Beckett, and Beckett’s meeting with Burroughs.  I learned things I never heard in my American Lit class.

But something nagged at me – it went back to when Christopher first brought up his Army photographer friend. Rosset was not just some legendary publisher, he had been a guy on the ground during the war in China – a combat photographer.  Rosset didn’t exactly agree with that title: “When I hear ‘war,’ I think of the Marines on Iwo Jima.  That’s war – and that wasn’t what was happening in China…. Everything was totally disorganized. There was no war – but underneath it all there was a war – a different kind of war.”

And that’s what I wanted to know about.  In the end I suggested an interview like those I had done with others who had been at war.  Rosset had documented the Chinese army as the Japanese pulled back from their final offensive. He was in the vanguard of the advancing Chinese army, and at times well ahead of it. Early on, he had befriended an OSS (Office of Strategic Services) officer who ran Chinese guerrilla teams behind Japanese lines, and accompanied him on some missions.  As the war was ending, he was sent to Shanghai, and was among the first of the few Americans who arrived while the Japanese were still in charge.  It was a surreal time, and not something I had come across before.  We did our interview.  I learned new things, and got fresh insights into things I thought I already knew.

I gave Rosset a draft – so he could review it for accuracy – and thus I can now say:  Ah, yes - I did a piece that was edited by the legendary Barney Rosset.  On a photograph he took of him, Poet Allen Ginsberg inscribed, “Publisher-hero Barney Rosset whose Grove Press legal battles liberated U.S. literature & film….”  I fit that into the title of my interview: Barney Rosset: The “Publisher-hero” as Combat Photographer in China.   It seemed appropriate.

So that’s how encounters in Bangkok lead to other things.  Looking back on a great experience, I have a single question:

So tell me, Christopher, why did we have to meet at the Thermae at midnight?