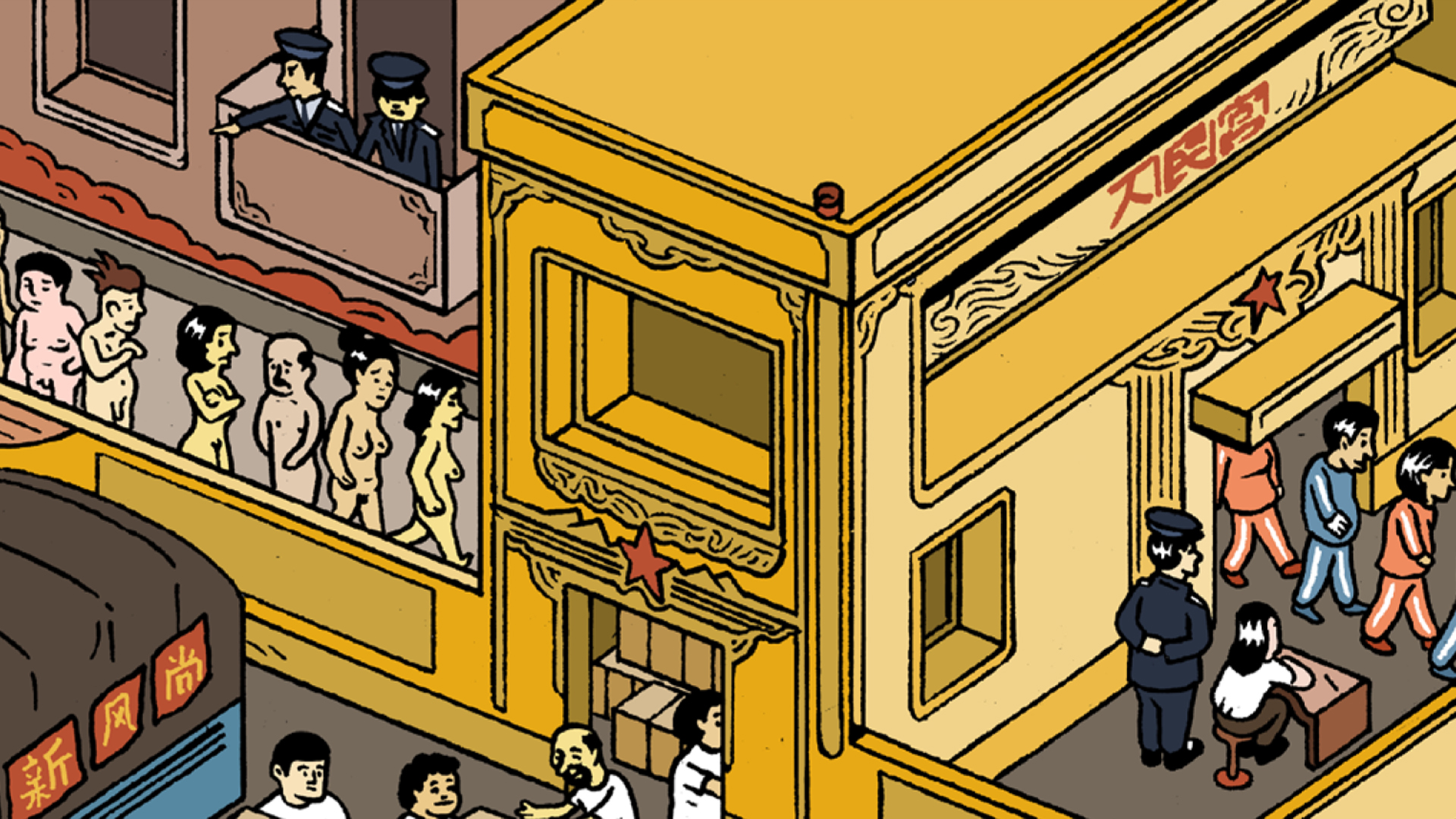 In 2014, the Chinese cartoonist and visual artist Yan Cong was arranging to self-publish some of his work. When his Beijing-based printer saw the files, however, they balked, telling Yan Cong that they couldn’t print any work with illustrated nudity in it. Yan Cong responded to this setback by contacting other cartoonists and putting out an open call for work to go in an anthology where every main character had to be nude.

Ultimately the book was self-published by Yan Cong under the name Naked Body (裸体). The comic reprinted here was one of the 30-odd works that were included in the volume.

In this piece, Zhai Yanjun’s story begins as a riff on the Emperor’s New Clothes, in which a young fashion designer debuts a clothing line made of nothing at all. Zhai Yanjun uses the premise for some light satirization of China’s nouveau riche and their infamous hunger for global fashion brands. We even see Xiao Ma chumming it up with Secretary Niu, a title that marks Niu as a party official.

It’s impressive just how many trends from contemporary China Zhai Yanjun manages to shoehorn into this brief comic. There are discussions of counterfeit goods and personal injury extortion schemes, as well as several references to the “reform and opening” campaign that was spearheaded by Deng Xiaoping beginning in 1978.

The perennial question of just how open China’s markets and cultural field have become is the larger context for the story. Scrubbing the cultural field of illicit content is a responsibility that the Communist Party still takes very seriously, which is why it is still so difficult to print comics featuring nudity in China. In 2007, a statement issued by the General Administration of Press and Publishing (GAPP) read in part, “Taking strict action against online obscene, pornographic, and other harmful material is a necessary requirement for the construction of a socialist harmonious society and for the purification of a healthy environment for youngsters and teenagers to grow up in.” (citation: Hockx, Michel. Internet Literature in China. New York: Columbia University Press, 2015.)

In Zhai Yanjun’s comic, it is Xiao Ma’s father, having been raised in a different political climate, who warns him about flouting the traditional taboos about public nudity. Xiao Ma has faith that his prominence in culture and industry will shield him from any backlash, responding, “Who else has achieved what I have?”

On the fourth page of the comic, we see a crackdown fermenting among Chinese authority figures. Ultimately all of Xiao Ma’s previous customers are forced to adorn matching jumpsuits.

Five years after Yan Cong’s anthology debuted, the micropress Paradise Systems, which I founded, ran a successful crowdfunding campaign to publish an English edition of Naked Body. In the years since Naked Body’s Chinese release, it has become even harder to find printers willing to skirt the regulations about independent publishing in China. As Xiao Ma’s father concludes, “In China, the people still rule.” 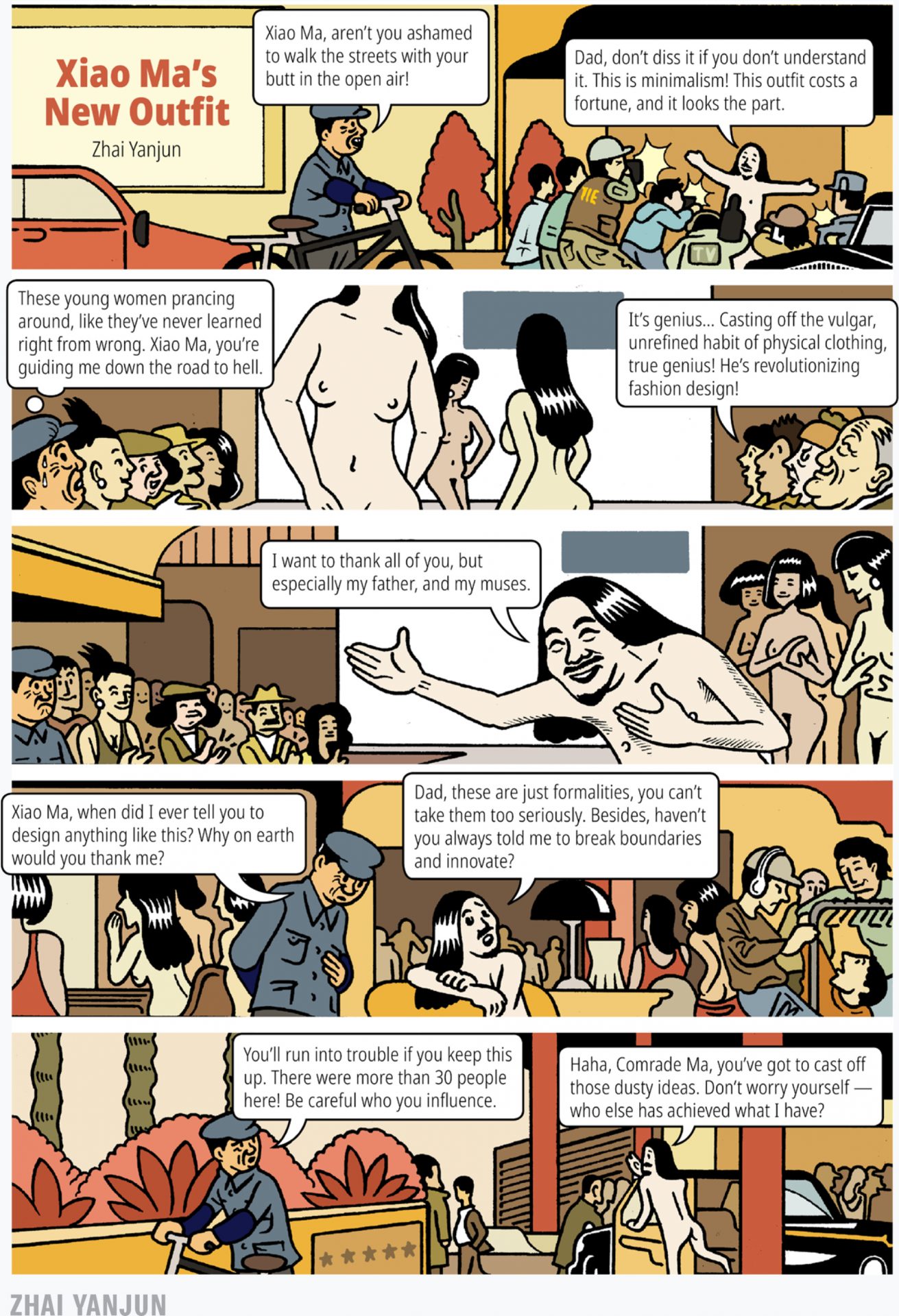 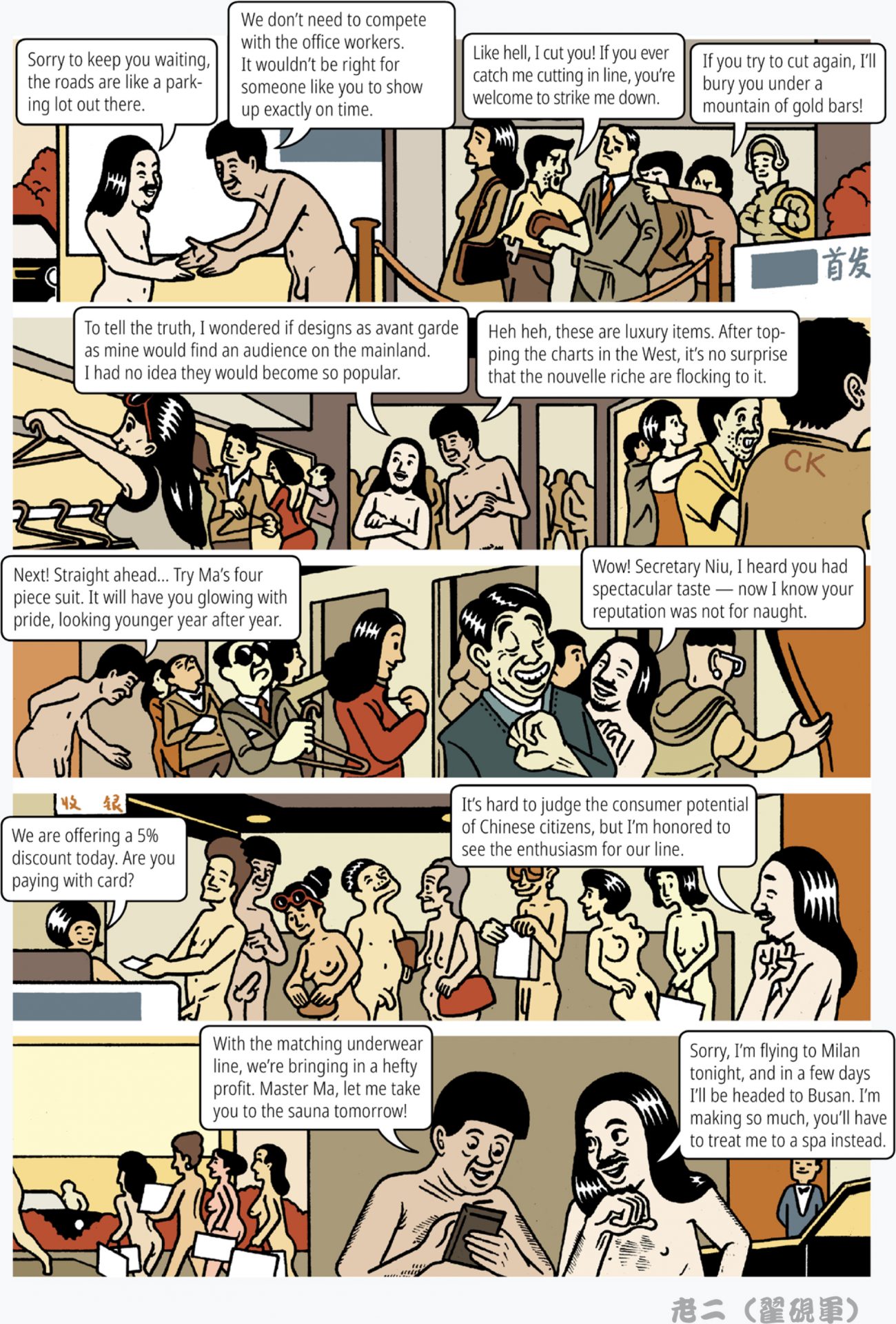 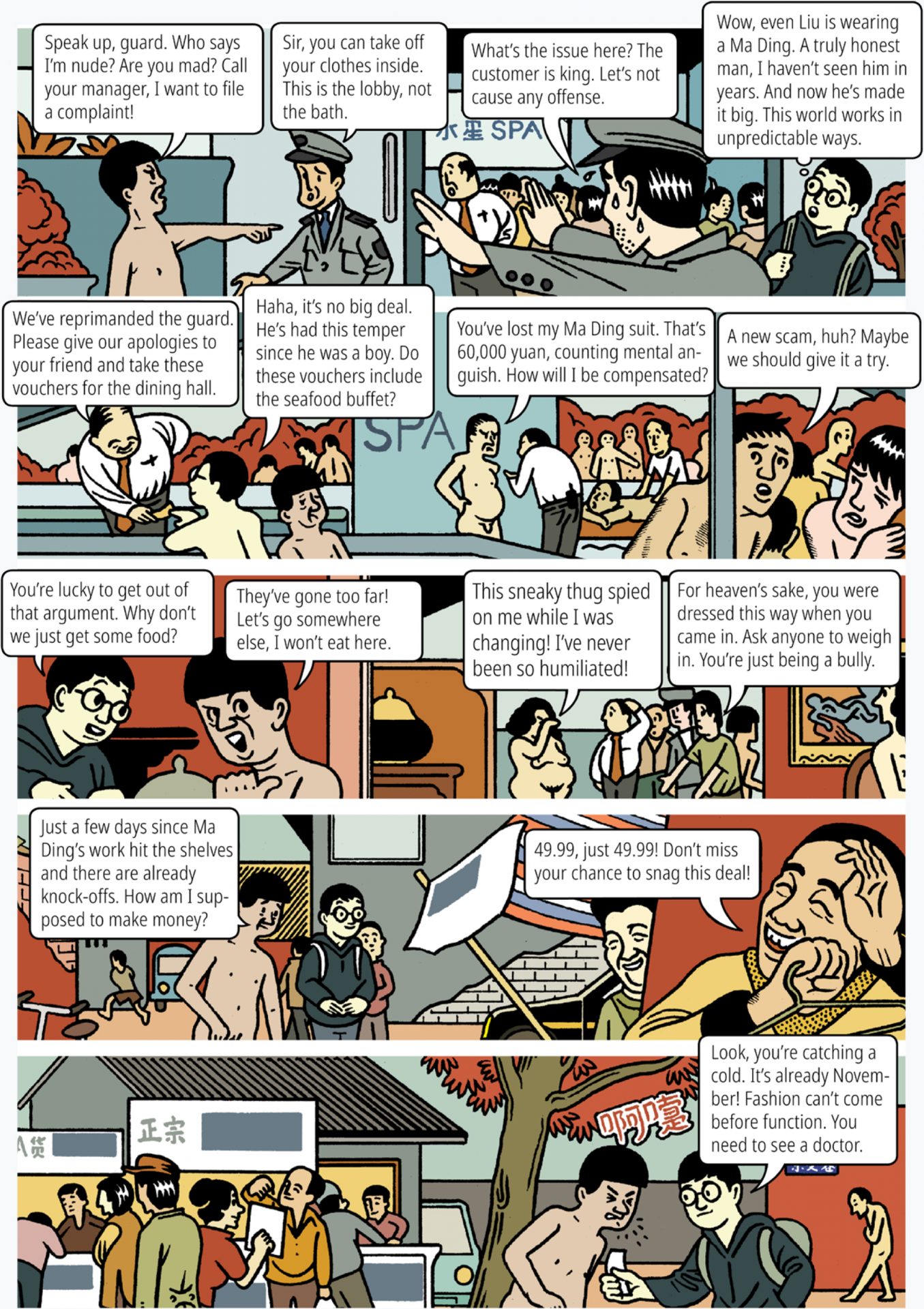 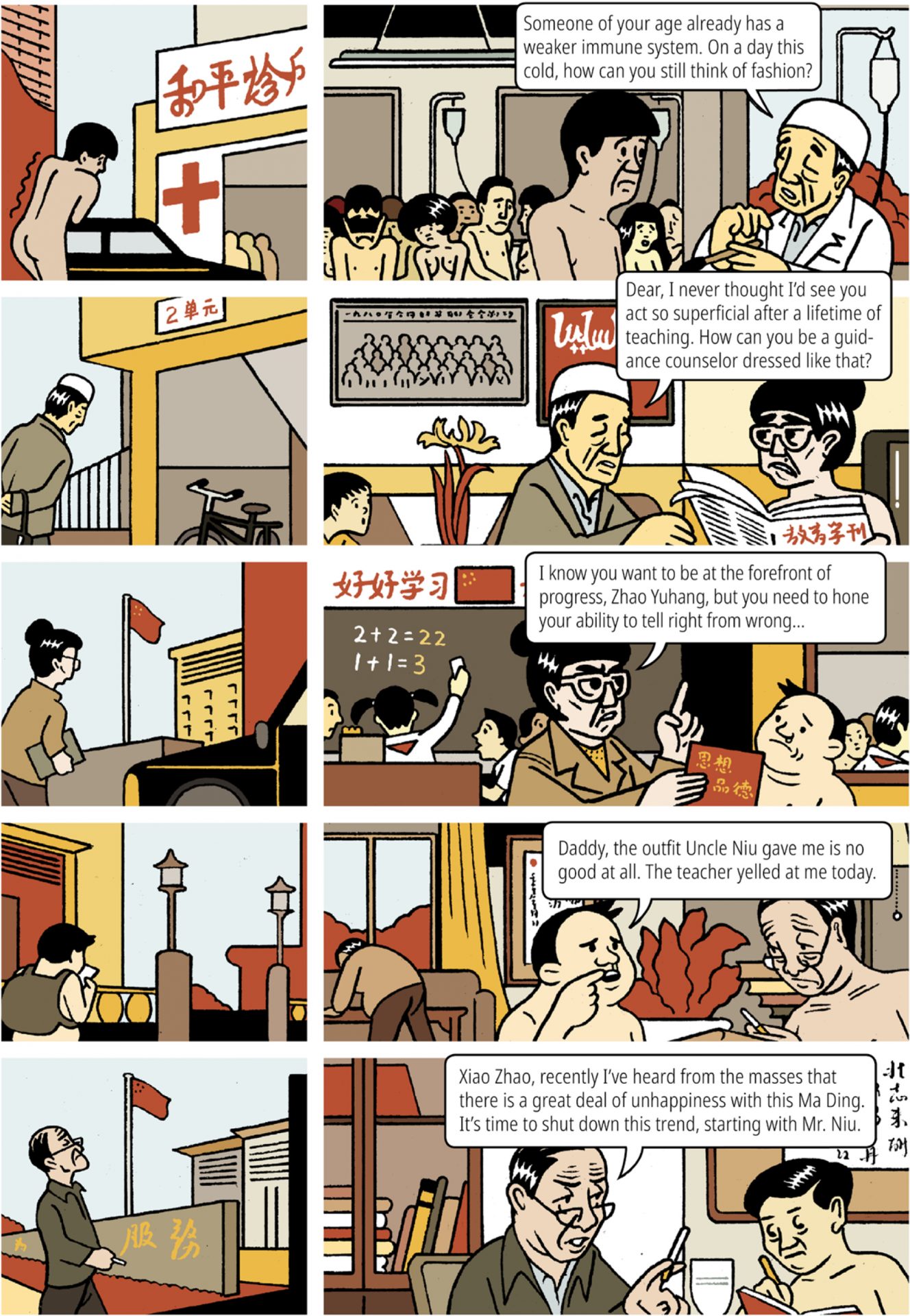 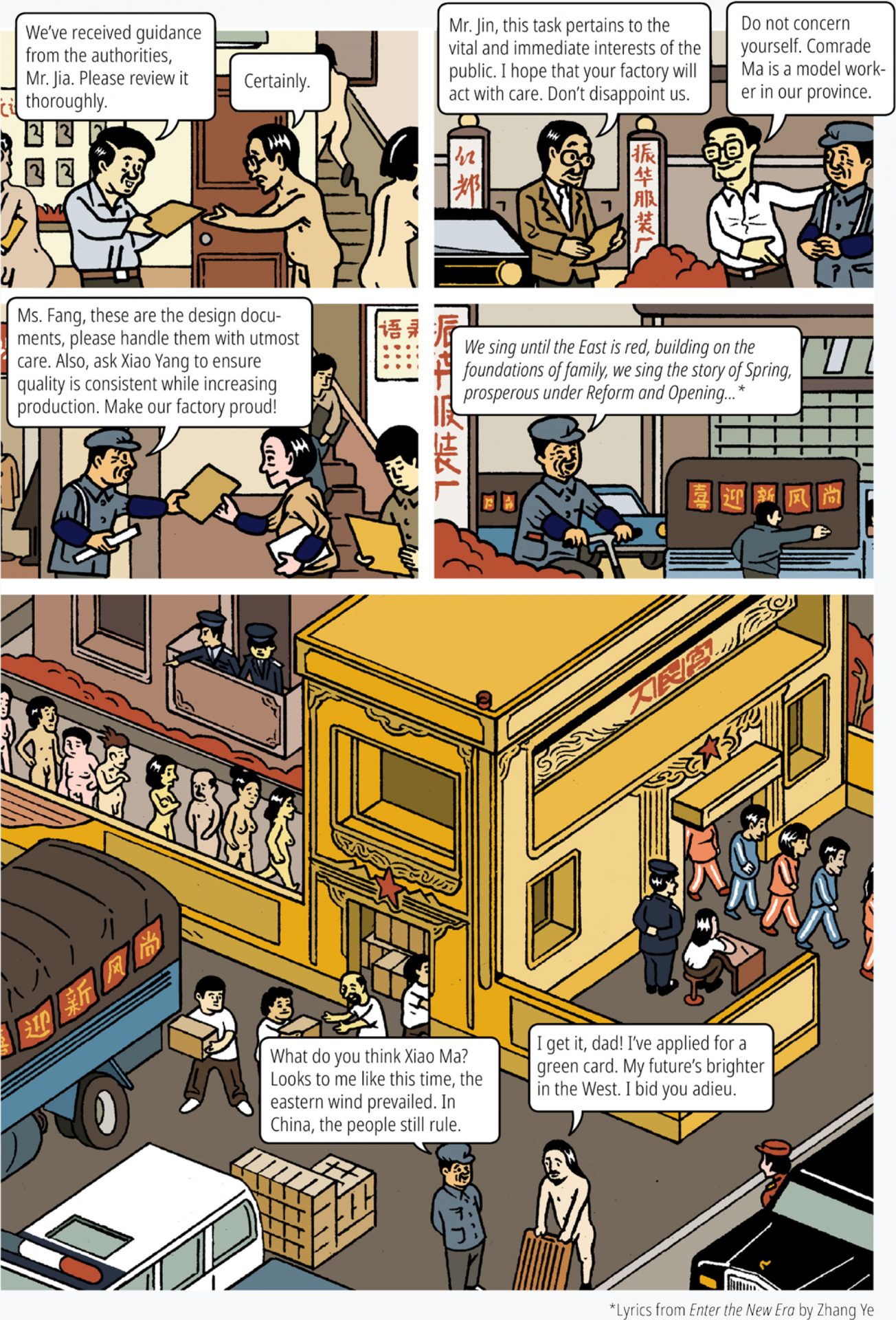